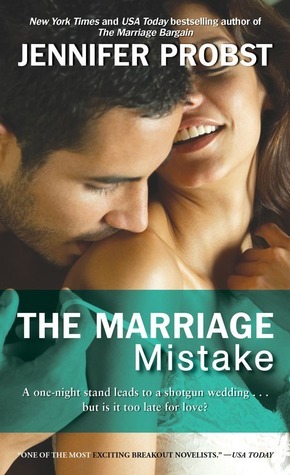 The Marriage Mistake by Jennifer Probst

Carina Conte has had a crush on her brother Michael’s best friend, Max Gray, since she was a teenager back home in Italy. Now she’s earned her MBA and come to work at Michael’s new venture, America’s fastest-growing bakery empire. But some things never change: her overprotective family still treats her like a child. With three drop-dead gorgeous siblings, she’s still the ugly duckling of the bunch. And Max, the company’s new CEO, still barely notices her.

Max knows Carina Conte is strictly off-limits, for the sake of his job and his friendship with Michael. But hot-blooded lust wins out at a conference when the two share a scorching one-night stand—and are busted by her mother! Now, forced by old-world Italian tradition into a marriage he’s not ready for, Max is miserable—and Carina is furious. Her new husband is about to realize that hell hath no fury like a woman transformed. . . .

The Marriage Mistake by author Jennifer Probst is book 3 in her incredible Marriage to the Billionare series and it was just amazing and so much fun to read. This story captured my attention right from the beginning with it’s lovable characters, witty dialogue, sexual tension and hot sex scenes.

I loved and adored the sexy hero in this story, Max Gray, who doesn’t know what has hit him when he encounters Carina Conte, all grown-up now, feisty and too sexy for his peace of mind. I enjoyed watching Max struggle with his non-brotherly-like feelings for Carina and the jealousy that consumes him as she tells him she wants to experience sex without any long-term commitment even if it’s not with him. He’s overly protective of her and doesn’t feel like he’s good enough for her but also doesn’t want anyone else to have her either. I enjoyed the comaderie and friendship he has with her brother, Michael. He’s caught between what he perceives as family betrayal and giving into his desires which creates great conflict in a love story.

Carina is tired of wearing her heart on her sleeves for Max and decides to appear more confident and sexy in her pursuit of independence and some pleasure. She teases Max mercilessly with her wardrobe and her innuendoes and it was so much fun to see a man squirm and finally give in. I liked that Carina is a strong, confident woman now yet still shows her vulnerability. I loved her friendship with Alexa and Maggie and their scenes together were hilarious and I couldn’t stop laughing. And let not forget the force to be reckoned with, Mama Contes, who is the wisest woman and such a fun character to see in action.

The author did a brilliant job writing a story filled with love, laughter, family, and friendships with characters readers have come to love. Each book in this series gets even better and I highly recommend The Marriage Mistake to all romance readers. I could not get enough of it and I’m so happy that there will be another book in this wonderful series, which has become one of my favorites.

« Review: Sleigh Ride with the Rancher by Donna Alward
Spotlight & Giveaway: When the Duke Found Love by Isabella Bradford »
Comments are closed.