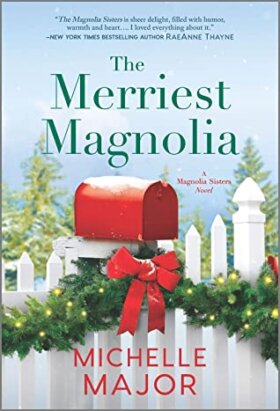 Carrie Reed was considered the town Princess growing up in Magnolia, North Carolina. Niall Reed was her father and he was an artist of some renown. Well, at least he was before his success waned. Yet he was a famous figure with much influence in Magnolia. After his death Carrie discovered that she has two half sisters who inherited his estate with her. Neither of her sisters, Avery Keller from California or Meredith Ventner from right there in Magnolia were aware that Niall Reed was their father. The estate is deep in debt but the sisters agree to work together to salvage what they can of the estate. On top of this the sisters, led by Carrie, are determined to revitalize the town. Those plans were threatened when Dylan Scott showed up back in Magnolia with plans of his own. Plans that were basically the opposite of the sisters’ plans. Carrie has high hopes of changing Dylan’s mind about his plans. After all they were high school sweethearts until her father bribed Dylan to leave town because he didn’t approve of their relationship.

Dylan Scott was a troublemaker “bad boy” back when he lived in Magnolia. He never felt he was good enough for Carrie Reed. So, yes, he left his hometown with a $5,000 check in his pocket courtesy of Niall Reed. He became successful in Boston working at his uncle’s company, Scott Development, with his cousin Wiley. Tragedy struck when Dylan’s uncle, cousin Wiley and Wiley’s wife were killed in a plane crash leaving Dylan to raise his nephew Sam. Dylan chose to move them to Magnolia and brought his redevelopment plan for an upscale revitalization of Magnolia with him. Since that plan was so very different from his former high school sweetheart Carrie’s plan they butted heads over their ideas. Spending time again with Carrie is a life-changing event for Dylan. But will their opposing plans destroy their relationship?

The Merriest Magnolia by Michelle Major is the second book in her Magnolia Sisters series. There are also prequel stories introducing the sisters available. I have read the previous books in the series and can still say that this one can be read as a standalone book. Yet I feel I got a better understanding of the relationships of the main characters by reading the earlier books. I liked how the sisters have each other’s back and support each other in their decisions. Also I liked the main couple in this story, Carrie and Dylan. They worked well together, other than their ideas for the town, by opening up to each other. Their different ideas for Magnolia made for a great conflict in this story. Author Michelle Majors did an excellent job of resolving that conflict. I love stories with humor but I also equally love stories that bring tears to my eyes as this one did at times. This story is a poignant, very emotionally satisfying read.

Carrie Reed has always been known as her hometown Good Girl, yet she still loves Magnolia, North Carolina—after all, this is where her newly discovered sisters, Avery and Meredith, live. But Christmas is on its way and with it, her first love. Dylan Scott is back in town and planning on changing everything she’s ever loved about Magnolia with his real estate development project…but not without a fight.

Returning to Magnolia was never in Dylan’s plans—it holds too many reminders that he would never be good enough, and memories of the girl he left behind. But when a tragedy leaves him guardian of a grieving teenager, Dylan returns, ready to remake the town into something only money can buy, small-town traditions be damned. But with Carrie determined to stop him, he finds himself wondering if redeeming his teenage reputation is worth losing out on his second chance at love.

« REVIEW: Why I Held Your Hand by Augusta Reilly
Spotlight & Giveaway: The Magic of Christmas by Christi Barth »

3 Responses to “REVIEW: The Merriest Magnolia by Michelle Major”