In The Secret to Southern Charm (Peachtree Bluff #2) by Kristy Woodson Harvey, Usually when 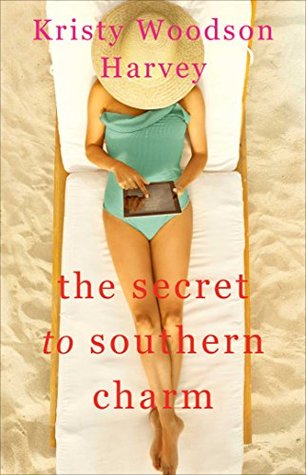 Sloane and her two young sons visit her childhood home in Peachtree Bluff, Georgia, it’s filled with fun times at the beach, family meals, and good conversations. Especially when her two sisters, Emerson and Caroline, join the fun along with their mother Ansley. But Sloane’s trip home takes on a much more somber note when she finds out that her husband Adam, a Sargent in the Army, has gone missing. It’s every military wife’s biggest nightmare come true. But with Sloane’s sisters, mother, and grandmother all pitching in to help take care of the boys and letting her deal with the news in her own way, she is able to draw on that strength and hope that no matter what happens, she’ll be able to stand on her own two feet. Most of all, though, she prays for her husband’s safe return.

‘I knew Adam would come back to me. I knew he would. But having these people surrounding me, bolstering my spirits, not letting me disappear into myself again while I waited, was an absolute blessing in the meantime.’

Ansley would do anything for her family. Something she thinks she’s proven time and time again, leaving her own dreams and promises of romance in the dust to take care of her daughters and her ailing mother. But she wouldn’t really change anything. Well, maybe one thing. Ansley would finally figure out how to deal with Jack, the first man she ever loved. And if she’s being honest, the man she still loves to this very day. It seems like no matter when their paths cross, something gets in the way and their timing is off, leaving them back where they started. With all of the problems hitting Ansley’s family at one time, rekindling the flames with Jack should be the last thing on her mind. However, when he gives her the green light–and an ultimatum–she’ll have to do some serious soul-searching to decide what’s right for her and for them.

The Secret to Southern Charm was another delightful novel from one of my new favorite authors in Southern fiction: Kristy Woodson Harvey. Filled with complicated relationships, exciting new beginnings and heartbreaking endings, this moving story touched upon every emotion imaginable.

‘This putting on a brave face, carrying on, helping others, being kind and humble and giving, believing with all your heart that the world could be a better place and that maybe you could make it that way…that was Southern charm.’

I’ve been (rather impatiently) waiting for this new installment in the Peachtree Bluff series to be released because after the way book one, Slightly South of Simple, ended–whew!–there was just so much more of this family’s story left to tell. It was entirely too easy to get completely caught up in Ansley’s struggles as a mother to her three grown daughters, not being able to comfort them and take away their problems like she might have when they were young. And Ansley herself had some huge life decisions to make in the last book, which carried over to this one. Her relationship with her first love, Jack, was as bittersweet as ever, with their lifetime of tangled emotions and tough situations to sort through. I have to say I was much happier with the ending here in regard to Jack and Ansley than I was the previous book. I’ll leave you to guess what in all happened between them, though. (lol)

The POVs switched from Ansley to her daughter, Army wife Sloane seamlessly, alternating with each chapter. I loved getting glimpses of how Sloane and her courageous husband Adam met, as well as reading some of the poignant and absolutely lovely letters he’d written to her while overseas. It was such a heartbreaking tragedy with him being MIA and nothing for Sloane to do but wait for word of his whereabouts. She was a lot tougher than she gave herself credit for and was a terrific mom to her two precious boys. It was great watching her sisters Emerson and Caroline, as well as their mom and their grandmother rally around Sloane. That tenacity, that strength in the face of all their struggles, is what I think of when I picture a family of Southern women. They were all there for each other, with their love and their family bond shining through.

I fell right back in love with cozy little Peachtree Bluff and its nosy but ultimately caring locals in this expertly crafted tale of family, loss, deceit, and love. Highly recommended.

Leaving fans “practically [begging] for a sequel” (Bookpage), critically acclaimed author Kristy Woodson Harvey returns with the second novel in her beloved Peachtree Bluff series, featuring a trio of sisters and their mother who discover a truth that will change not only the way they see themselves, but also how they fit together as a family.

After finding out her military husband is missing in action, middle sister Sloane’s world crumbles as her worst nightmare comes true. She can barely climb out of bed, much less summon the strength to be the parent her children deserve.

Her mother, Ansley, provides a much-needed respite as she puts her personal life on hold to help Sloane and her grandchildren wade through their new grief-stricken lives. But between caring for her own aging mother, her daughters, and her grandchildren, Ansley’s private worry is that secrets from her past will come to light.

But when Sloane’s sisters, Caroline and Emerson, remind Sloane that no matter what, she promised her husband she would carry on for their young sons, Sloane finds the support and courage she needs to chase her biggest dreams—and face her deepest fears. Taking a cue from her middle daughter, Ansley takes her own leap of faith and realizes that, after all this time, she might finally be able to have it all.

Harvey’s signature warmth and wit make this a charming and poignant story of first loves, missed opportunities, and second chances and proves that she is “the next major voice in Southern fiction” (Elin Hilderbrand, New York Times bestselling author).

6 Responses to “REVIEW: The Secret to Southern Charm by Kristy Woodson Harvey”