In The Switched Baby Scandal by Theresa Meyers, Taylor Lawrence is trying to sue the father of her little girl in order to receive child support. He may have abandoned her when he found out she was pregnant, but he is still the father and has a responsibility, or so she believes. When the DNA results she needs to take to court are being read to her, she cannot believe what they are saying, not only is her ex not the father but she is not the mother either! If she does not find out what really happened they may take her little Emily away from her, and she needs to know what happened to the child she carried in her womb for nine months. 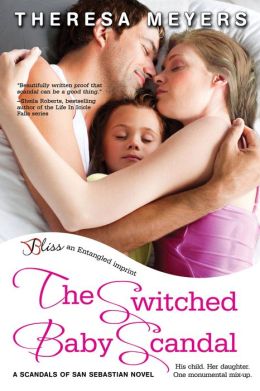 Reece Wallace has been living a dull life for the past year, since a drunk driver killed not only his wife but his daughter Alyssa too. Every time he hears a young child he thinks he will see his little girl running and laughing, but that was taken away from him. To his surprise he receives a letter from Clemens County Hospital, where his daughter was born, about some confusion and that he needs to contact them urgently. At first he does not know what they want, but when they tell him there was a baby switch and that his baby may not be his and the other girl might be, he feels that he has been given another chance and reason to live again.

When Reece goes to the meeting in the hospital to get the DNA test done he arrives early but he needs to gather his courage before he can go into the hospital. Only as he decides to get out of the car it starts raining and when he walks towards the hospital a woman is walking in ahead of him.

“I guess I closed my umbrella too soon. I didn’t realize I’d need it indoors, too” She gave him a brief smile. The soft curve of her lips made the idea of a kiss leap to mind.
His mouth went dry. For the first time in his life he was unable to whip up a flip reply. Something about her went to the center of him like an electric shock.

At first all seems okay, until she notices him ogling her chest, which is now wet thanks to him, while he is wearing a wedding ring, infidelity is not something that she approves of.

But to both their surprise when they show up to the meeting with Patricia Fairmont, the public relations officer for the hospital, they find out that Reece may be the potential biological father of Emily. At first Taylor believes that she can convince him that Emily is hers, but when he tells her that her daughter has died and that he wants to talk about custody, she knows that she may have a fight on her hands and she cannot loose her daughter.

Taylor and Reece agree to meet in order to decide the best way to introduce Emily to her him and to start talks about custody, but Taylor is used to being the only one in charge of Emily and Taylor does not believe that she can share, especially after Emily immediately takes after Reece and she starts to feel replaced.

That is not the only challenge for these two, they have a chemistry and attraction that they cannot deny, but the guilt that Reece carries over from the deaths of his wife and Alyssa may prevent him from opening up to new love. Also Taylor has her own demons to fight, and she needs to realize that not all men are out to hurt and disappoint her, if she will only open herself enough to give Reece a chance he can prove that to her. Besides their personal demons, they also have to face the media, which has taken a big interest in the switched baby scandal, for not only are they harassing them, it has gotten to the point that they are following and taking pictures of Emily at school or wherever she may be with or without them.

Both Taylor and Reece know that love doesn’t only come from giving birth or life to a child but also by raising them and giving them love while they are growing up. And this reason alone will entwine all of their lives and give a new meaning to the word family.

For an emotionally deep story line that will break your heart and will leave you with a very happy ending, don’t miss The Switched Baby Scandal by Theresa Meyers.

His child. Her daughter. One monumental mix-up.

Single mom Taylor Lawrence just discovered that the hospital sent her home with the wrong infant five years ago. Now the headstrong and handsome biological father wants his child back. But Emily has always been her daughter, and Taylor wont give her up without a fight.

Widower Reece Wallace believed his life was over when a drunk driver killed his wife and daughter. So when he learns of the baby switch, he sees this child as his ultimate salvation. But he never anticipated the fiery woman on the other side of this custody battleor how shed stir feelings in him long dormant.

As the media storm surrounding the hospitals mistake intensifies, Taylor and Reece find theres more to sort out than custody of Emily they must work together to protect her while grappling with their growing attraction. Can they pick up the pieces of two broken families and meld them into something new?

« REVIEW: Mac’s Angels: Sinner and Saint by Sandra Chastain
REVIEW: Waking Up in Vegas by Romy Sommer »
Comments are closed.