The Witch’s Quest by Michele Hauf finds air witch Valor Hearst in the Darkwood, a forest forbidden to witches, on a quest to find 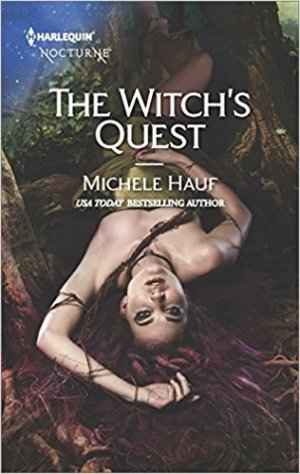 ingredients for a love spell. Tired of being seen by men as just one of the guys, she’s determined to make herself more lovable. Only the forest doesn’t like witches, and she soon finds herself being pulled into the ground.

Faery Kelyn Saint-Pierre has always been interested in Valor, but convinced she had been with his brother, Trouble, he keeps his distance. Until he finds her halfway in the ground. A demon appears and offers him a deal–saving Valor in exchange for something important to him. Determined to get his items back for him, Valor drags Kelyn all around the world in a quest to find all the ingredients she needs to open a portal to Faery, where the demon disappeared to.

I’ve read books by this author before that I’ve enjoyed, but I had mixed feelings about this one. First there’s Valor. She knows better than to go into Darkwood, yet she does it anyways without giving any thoughts to the consequences. Then when everyone is mad at her and gives her attitude, she just accepts it. Yes, she made a mistake, but Kelyn also made the choice to give up what he did for her. She’s also very hard on herself, often complaining about how she’s not viewed as a woman. The self-pity party was a little tiring.

Kelyn’s initially mad at Valor, which is understandable, but he acts like the whole thing was her fault, when, once again, she didn’t force him to make his choice. Also, he’s convinced she slept with his brother, but whenever she tries to explain the truth to him, he brushes her off and refuses to let her tell him the truth.

A couple of things were left unexplained. For example, the Unseelie King knows Kelyn’s mother. Kelyn’s brothers, Blade and Stryke, seem to know the story behind that, yet neither tell it to Kelyn. This leave readers without knowing the connection, either. Blade and Stryke both have their own books, neither of which I read, so I’m not sure if it was covered in them. Still, it leaves readers hanging.

There is also the unresolved tension between Valor and Trouble. Trouble is obviously upset at what happened to his brother so he pushes her away. It’s never mentioned if he forgives her or if they are able to repair their relationship. Considering how much their relationship was explained in the book, and how worried Kelyn seemed to be about it, it would have been nice to have had some closure on that front.

I enjoyed the storyline. I liked the pair’s adventures around the world and seeing the obstacles they had to overcome. I just had issues with some of behaviors the characters exhibited and the fact that some things were unresolved, which, unfortunately, took away from the story for me. Fans of paranormal books may enjoy this one. It has a little something for everyone–witches, faeries, werewolves, vampires, and demons are all included in this one.

Kelyn Saint-Pierre always had a bit of a thing for Valor Hearst. But after he makes a harrowing sacrifice to save the tomboyish witch from a gruesome death, Kelyn’s certain that any spark between them is gone forever.

Valor wishes she’d known about Kelyn’s crush before she ruined everything. There may be a way she can repay her smoking-hot champion…but it won’t be easy. Circling the globe on a dangerous mission that pits them against deadly magics and dark creatures, Kelyn and Valor are pushed scorchingly close together. But surrendering to passion may only further bind them in pain.

« REVIEW: Need You Now by Emma Douglas
REVIEW: Bad for Her by Christi Barth »

4 Responses to “REVIEW: The Witch’s Quest by Michele Hauf”