In Timid (Lark Cove #2) by Devney Perry, There are times when Willa Doon wishes she could overcome 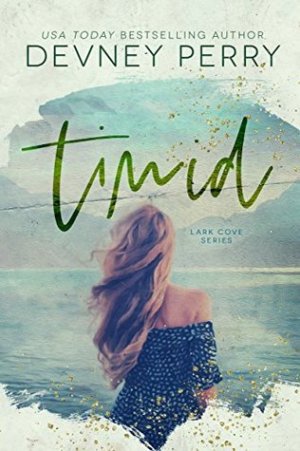 her shyness and be more bold like some of her friends. Not all of the time, because she likes who she is overall. It’s when it comes to the guy of her dreams, bar owner Jackson Page, that she’d like to be more memorable. Especially considering he can’t even seem to remember her name, let alone ask her on a date. But when Willa and Jackson finally cross paths one starry night and he gives her a kiss she will remember forever, she’s mortified to learn that he forgets it, given his drunken haze at the time. So when he suddenly notices her again shortly after, Willa decides to make Jackson work for it before she’ll agree to a date. Because she knows that once he lays on the charm, she’ll be done for.

‘After years of watching and waiting and hoping, Jackson had finally noticed me.
Me, the shy girl who’d loved him from a distance. Tonight, he’d made one of my dreams come true.’

Moving from NYC to Lark Cove was one of the best things Jackson has ever done. Surrounded by Montana’s peaceful, rugged landscape, he’s finally able to let go of some of his traumatic past. Given his penchant for casual hookups with lovely tourists, Jackson is surprised when he is drawn to a picture his close friend Thea sketches of a local woman. Willow, as he’s mistakenly called Willa for years, has never enticed him for some reason before. Now he can’t get her out of his head. And there’s something niggling at the back of Jackson’s memory about her, something familiar. He’s shocked to find out Willa has had a crush on him for years and that he feels more comfortable with her than any other women he’s been with. Shy but with a tiny bit of sass, gorgeous and fiercely protective of her loved ones, Willa is everything Jackson would want in a long-term girlfriend. If only he could trust enough to give his heart to her completely.

‘Would she stay? Would Willa be that one person to stick?
Yes.
She was my courageous champion. My warrior. My lover. My friend.
My everything.
Willa was the one.’

Timid was an emotional romance about unrequited love finally being realized, written by one of my new favorite authors, Devney Perry. And I mean, how can you not sigh happily over a bad boy with a kind heart who falls head over heels for an equally wonderful woman?

I will say two things right away here. First, this basically runs concurrent with book one, Tattered, so it has spoilers if you haven’t read Thea & Logan’s story yet. Second, the hero and the heroine, Jackson and Willa, might not be everyone’s cup of tea–although I ended up liking both of them very much.

I was still impressed with Perry’s writing style in this second installment, with how deep the emotions ran and with the overall story arc. The characters were compelling, and relatable in how flawed they were. I think it’s their personalities that some readers may not gel with, especially if you like strong outspoken heroines–which Willa was *not*. As the book title suggests, she was rather timid and shy at times. I wouldn’t call her a true introvert, because she was fine leading the groups of kids at the camp, had aspirations to become a teacher who would stand up in front of dozens of kids, and she had a social life by going out with her friends quite often. However, Willa didn’t stand up for herself as much as I think some readers will want her to. And honestly I was okay with how she handled things because I understood where she was coming from.

Admittedly, Willa’s POV sometimes seemed almost teenagerish, given her lack of experience in the romance department. I thought it was rather endearing considering Jackson was her first crush as a teenager and it continued into her mid-twenties. And once Jackson figured out she had a thing for him and finally saw her as the beautiful woman she was, well, I loved how intense his focus became on Willa. I have a feeling some readers may want to write Jackson off before giving him a chance. He was a bit misunderstood in Lark Cove after overcoming a horrible childhood and came across as a gruff ladies’ man–which was partly true. However, there was more to Jackson than that. And I loved that Willa was able to get him to open up emotionally (eventually) and prove to him that not everyone in his life would hurt or leave him.

A couple of surprising plot twists and a bad boy/good girl romance made Timid a captivating story. Devney Perry’s irresistible writing style and the charming location of Lark Cove, Montana will certainly have me coming back for more.

Willa Doon has always been shy. Her quiet demeanor was something she’s always embraced. That is, until Jackson Page moves to town. The one man she desperately wants to take notice struggles to remember her name.

Year after year, Willa stands by, watching as the bartender slash playboy drowns his demons in beer and sex. Then one night, he shows up at her door, suddenly aware that the girl he’s seen around Lark Cove is now a beautiful woman.

Except what he doesn’t remember is that this visit isn’t his first. They spent a night together once before. A night he’s forgotten, thanks to a bottle of tequila.

A night that crushed a timid girl’s heart, and set a broken man on the path to heal them both.