Touched by Passion by Megan Hart is included in the three book collection called Strangers of the Night. While there were three stories, 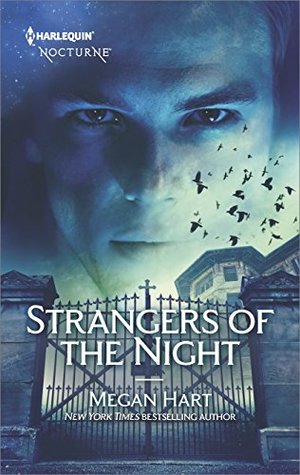 it seemed like there were only two in the copy I received. And what makes it hard to review this is that the weren’t separated, so it was hard to tell if they were actually supposed to be part of one story, or if they were actually two separate ones mingled together as the chapters alternated between the two stories.

One story is about Samantha Janecek and Jed. Samantha is part of a group called the Crew that investigates the paranormal. She’s undercover as a nurse at a facility that houses and performs tests on people with paranormal abilities. Jed is one of those people, having been locked in the facility since he was a teen. With rumors that he’s about to be executed, Samantha is determined to save him.

The second part of the story is about Persephone Collins and Kane. Persephone and her brother both have paranormal abilities, and she occasionally does work for the Crew. She has the ability to mask her appearances, turning her looks into anything she wants. She uses her glamor on Kane to get him into bed, but for the first time she feels like she wants to show her true appearance to someone.

These are novellas and, as such, both stories felt a bit rushed and underdeveloped. As it was, I felt Samantha and Jed’s story was a bit more developed than Persephone and Kane’s. With Samantha and Jed, I could feel the connection between the two. I also enjoyed the escape attempt. There were, however, unanswered questions, such as why did Samantha have a lack of memory about what happened to her father and the night he died? How was it related to the case she was working on after Jed left?

With Persephone and Kane, there was a lack of chemistry. When he meets her again, he didn’t even realize she was someone he already had a one night stand with. Then there’s the unresolved question of who the men are that are searching for her. It’s briefly mentioned why someone may be searching for her, but that aspect of the story didn’t feel resolved.

If I had to choose, I prefer Samantha and Jed’s story over Persephone and Kane’s, as it’s a little more developed. If you enjoy paranormal stories and novellas, this may be a book for you. If you like your stories more developed, you may want to pass on this one.

Three young people with a shared tragic past that left them burdened as well as blessed with supernatural talents are now the target of forces determined to harm them. But their fate rests with the strangers that help them—a nurse at a mental hospital, a detective and a small-town librarian—strangers who must suspend their own disbelief to protect them. In this enthralling trilogy, these fearless, damaged souls are ready to embrace the unfathomable but are wholly unprepared for the passion they find in the arms of a stranger.

4 Responses to “REVIEW: Touched by Passion by Megan Hart”