In Uncovering Her Secrets by Amalie Berlin, Dr Dasha Hardin hopes to save the brilliant yet volatile career of the irresistible Dr Preston Monroe. She is 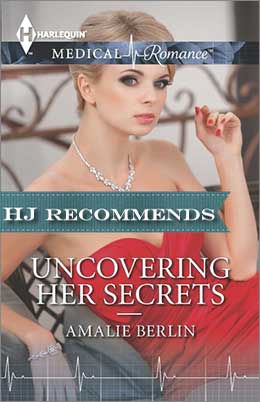 trying to make amends for betraying Preston five years ago by stealing his fellowship but her perfect plan is suddenly complicated by his touch, which still makes her heart zing!

Preston does not want Dasha anywhere near him, especially after her unforgivable betrayal. It does not matter if she has changed–he won’t be making the same mistake twice. But the more he discovers about this new, feisty and vulnerable Dasha, the more he wants to get close to her.

Uncovering Her Secrets by Amalie Berlin is a story about forgiving your loved one and seeing beyond their past mistakes for a brighter future. Dasha and Preston had tons of problems to solve before they could start their journey once again. Their second chance romance wasn’t easy for either of them because they both had to fight their demons. I love flawed characters because I find them more realistic and therefore I loved Dasha because she is not a perfect character. She has her flaws and yes she has an unforgivable past but then who’s perfect in the real world..?. Preston was frustrating at times but I think it was understandable given his circumstances. Forgiveness is easier said than done so I could relate well with his character–even though I seriously wanted to strangle him at times.The medical details are one of the best parts of the story and I loved reading them.

Overall, Uncovering Her Secrets by Amalie Berlin is a well written story that takes you on an emotional ride and keeps you hooked throughout. If you can see past the characters flaws, this story is sure to leave you amazed.

A chance to make amends…

By hiring her ex-boyfriend, the irresistible Dr Preston Monroe, Dr Dasha Hardin hopes to save his brilliant yet volatile career – her secret atonement for her unforgivable past…But her perfect plan is suddenly complicated by his touch, which still makes her heart zing!

Preston is forced to trust Dasha, but he won’t be getting any closer – even if she has changed. Only getting to know her again leaves him wanting to discover more about this new, feisty and vulnerable Dasha – the only woman with the strength to fight for his irredeemable soul…

2 Responses to “REVIEW: Uncovering Her Secrets by Amalie Berlin”