Who’s That Earl by Susanna Craig is the first book in the new series Love and Let Spy. I’ve not read 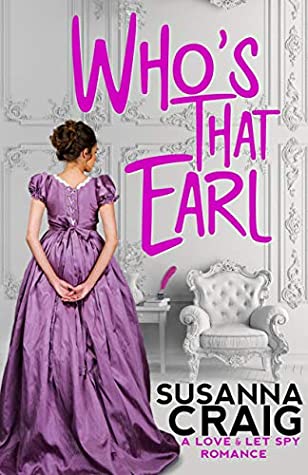 a lot of books by this author, so I wasn’t sure what to expect. It started interesting and my attention was caught by the possibility of a gothic novelist and a British spy having a second chance at love. I did feel as if the book dragged in the middle, but the suspense kept me reading until the end.

Jane Quayle and Thomas Sutherland had met several years before in London, but their romance ended abruptly when Thomas left for war. He never got the chance to see her before he left, but he had thought about her over the years and wondered what had happened to her. He never expected to leave the army and return to the Highlands or inherit the title of Earl of Magnus, but General Scott insisted he had a duty to his new title. Thomas returns to Dunnock Castle in Scotland hoping to hire an efficient estate manager so he could return to the army. He knew the estate had been leased to a novelist, but he never expected to find Jane living in the castle.

After being thrown out by her father at the age of eighteen, Jane Quayle had learned she only had herself to rely on. With her creative mind, she starts to write gothic novels under the pen name of Robin Ratliff. She leases an isolated crumbling castle in Scotland and establishes herself as a widow who assists Mr. Ratliff with his books. She was receiving threatening letters but thought she was safe as the widowed Mrs. Higginbotham. Hiding her identity and feelings from Thomas became difficult, but she was too scared to depend upon someone else.

The book was full of suspense, twists, and just as you think the person who is sending the threatening letters has been revealed, the story takes an unexpected turn with a surprise ending. Neither Jane nor Thomas had ever expected to see each other again so maybe fate had a hand in their meeting again or could General Scott have had a hand in it? The ending leads the reader to believe that General Scott likes to “help” his soldiers find their happy ever after.

Miss Jane Quayle excels at invention. How else could the sheltered daughter of an English gentleman create lurid gothic novels so infamous someone wants their author silenced forever? Fortunately, Jane has taken steps to protect herself, first by assuming a pen name, and second, by taking up residence at remote Dunnock Castle, surrounded by rugged scenery that might have been ripped from the pages of one of her books. Her true identity remains a secret, until one dark and stormy night…

After years of spying for the British army, Thomas Sutherland doubts the Highlands will ever feel like home again. Nevertheless, thanks to a quirk of Scottish inheritance law, he’s now the Earl of Magnus, complete with a crumbling castle currently inhabited by a notorious novelist. When the writer turns out to be the woman Thomas once wooed, suspicions rise even as mutual sparks reignite. As danger closes in, can Jane and Thomas overcome their pasts to forge a future together?