In You Say It First (Happily Inc #1) by Susan Mallery, Leaving Fool’s Gold for the foreseeable future was a move Nick Mitchell made 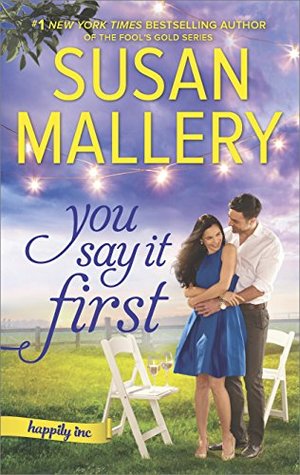 to keep his sanity and to find a new project to keep him occupied. As a sculptor and woodworking artist, he’s in line to get a lucrative job overseas but he makes a pit stop in Happily Inc, California, to do some carpentry work in the meantime. His boss, Pallas Saunders, turns out to be as beautiful as she is smart and proves to be a lovely distraction. But even though Nick knows better than to get too emotionally tangled up with someone after watching his parents’ explosive relationship over the years, he goes and falls for Pallas. And with every project he assists the gorgeous wedding business owner, he’s not sure how he’s going to be able to walk away when it’s time.

‘Passion consumed, destroyed… He’d believed that most of his life. Yet without passion, what was the point? As she’d pointed out, without love, weren’t they all just going through the motions?’

Working at Weddings in a Box has been a blessing for Pallas the last several years. And now as the new owner of the business, she is poised to either go all in and make things her own or to finish the season and sell it off. She’s still on the fence, knowing what is expected of her is to work at the family bank alongside her overbearing mother. To further complicate matters, the carpenter she hired is not only a famous artist but he’s also a charismatic, good lookin’ guy with whom she has instant chemistry. Pallas isn’t looking for a fling or even a long-term relationship, with her life already in disarray. But Nick is too tempting to resist. He also becomes one of her biggest supporters when it comes to her complex relationship with her mother and with her struggles figuring out the future of her business. Although it’s her future with Nick that’s confusing Pallas the most.

“What’s up?” she asked, staring into his dark eyes.
“Can’t a guy want to see his girl?”
His girl. Was she? She wanted to be. Wanted what they had to last for as long as possible. Forever sounded good.

You Say It First was a satisfying romance that starts off this latest series by Susan Mallery nicely. With lots of great characters and a quirky new town to learn about, I think readers will be completely entertained with this story.

‘Being his father’s son, he knew the best place to totally get lost was in work. Because when you were in a project, the demons couldn’t find you.’

In my humble opinion, I think Susan Mallery is one of the best, most solid writers out there today in terms of small town romances. If you’ve read her Fool’s Gold series then you know what I mean. But even if you haven’t, You Say It First is the perfect introduction into the charming characters and the offbeat but still down to earth communities she creates. And in this book we toured Happily Inc, California, and met several of our heroine Pallas’s friends. Who it sounds like will get their own stories at some point–and I can see how fun they’re going to be already!–so it sets the series up in grand style.

All of the characters as well as Pallas’s business predicaments stole the show for me. I adored Nick and Pallas as a couple and thought they were so darn sweet together. There was a nice amount of heat between them but they just seemed to fit personality-wise. Nick was a fairly famous artist from Fool’s Gold who was sexy, laid back, and not afraid of hard work when it came to his art or helping someone out. Pallas was loyal, had a great sense of humor, and was a very loving friend but had some issues with her self-esteem, courtesy of her relationship (or lack thereof) with her mother Libby. She grew up thinking she had to earn love and that nothing she did was good enough which carried over into her adult life as you would expect. Nick also had it tough growing up with a father who basically taught him that “passion consumes” and causes nothing but drama.

I did feel like Pallas’s problems with her mother took over the storyline a few times but I understood why. Her mom was right there in Happily Inc (whereas Nick’s father was not) and was a constant negative presence in her life. I loved that Nick not only gave Pallas a boost to her confidence but that he stood up for her without her even asking him to do so. That’s just the kind of caring, good guy that he was. I will also say that Nick proved to be rather decisive towards the end after having an internal battle over a few things, and that once he made up his mind, there was no stopping him. It made for a quick turnabout in his relationship with Pallas but a wonderfully romantic ending.

There’s something both exciting and comforting about reading a book by Susan Mallery. And as with Pallas and Nick’s romance, I think readers will continue to connect with the majority of the characters in future novels. And I have a feeling that the journey to each couple’s HEA will be unique and just as equally heartfelt as this one was.

The #1 New York Times bestselling author of the Fool’s Gold romances invites you to visit Happily Inc., a wedding destination founded on a fairy tale

Sculptor Nick Mitchell grew up in a family of artists and learned from his volatile father that passion only leads to pain. As he waits on a new commission, he takes a day job as a humble carpenter at a theme wedding venue. The job has its perks—mainly the venue’s captivating owner, Pallas Saunders. Although he won’t let love consume him, for ecstasy with an expiration date, he’s all in.

Pallas adores Weddings in a Box. But if she can’t turn the floundering business around, she’ll have no choice but cave to her domineering mother and trade taffeta for trust funds working at the family’s bank. Then when a desperate bride begs Pallas for something completely out of the box, her irresistible new hire inspires her. Nick knows she doesn’t belong behind a desk, and she knows in her heart that he’s right—where she really belongs is in his arms.

10 Responses to “REVIEW: You Say It First by Susan Mallery”