Today, HJ is pleased to share with you Sinclair Jayne’s new release: A Baby for the Texas Cowboy

Neither one of them had any intention of settling down… 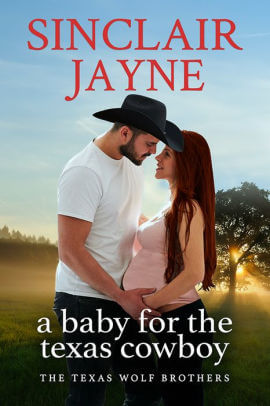 Tinsley Underhill left everything behind five years ago and hasn’t looked back. She loves life on the road following the American Extreme Bull Rider’s tour representing sponsor Four Wolves Whiskey. She rocks sales and pouring shots, and the bull riders are a sexy perk. She exults in the flirting and the chase, but when she lets her favorite champion catch her for a steamy fling, she knows they both have one foot out the door.

Bull rider Anders Wolf is on top of more than just the leaderboard. Life is good. Women are better, especially the intriguing and gorgeous Tinsley. The fireworks are more explosive than he imagined, but even the best mind- and body-blowing pleasure must end. No way he’ll be roped early…then Tinsley’s casually announces she’s pregnant. Anders intends to do the right thing, but Tinsley’s plans don’t include him, marriage or happy ever after on his Texas ranch.

Anders has never backed down from a challenge, and he’s not about to start now.

Enjoy an exclusive excerpt from A Baby for the Texas Cowboy

Excerpt. ©Sinclair Jayne. Posted by arrangement with the publisher. All rights reserved.

Giveaway: Digital ebook of A Baby for the Texas Cowboy

Sinclair has loved reading romance novels since she discovered Barbara Cartland historical romances when she was in sixth grade. By seventh grade, she was haunting the library shelves looking to fall in love over and over again with the heroes born from the imaginations of her favorite authors. After teaching writing classes and workshops to adults and teens for many years in Seattle and Portland, she returned to her first love of reading romances and became an editor for Tule Publishing last year. Sinclair lives in Oregon’s wine country where she and her family own a small vineyard of Pinot Noir and where she dreams of being able to write at a desk like Jane Austen instead of in parking lots waiting for her kids to finish one of their 12,000 extracurricular activities.

« Spotlight & Giveaway: Close to Me by Monica Murphy
REVIEW: Her Scandalous Pursuit by Candace Camp »

25 Responses to “Spotlight & Giveaway: A Baby for the Texas Cowboy by Sinclair Jayne”