Today it is my pleasure to Welcome author Gerri Russell to HJ!

Hi Gerri and welcome to HJ! We’re so excited to chat with you about your new release, A Laird and a Gentleman! 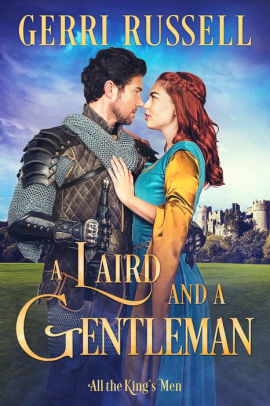 A Laird and a Gentleman is a reverse Beauty and the Beast story—where the heroine is the beast…or in this case…a witch. Mariam is frightened of who she is at the beginning of the book, but by the end of the story she not only learns how to stand up for herself, she embraces what it is that makes her different.

This might not be the most exciting quote in the book, but I truly feel for the time we are living in, this quote is the most profound. The chatelaine at Ravenscraig Castle and Mariam’s friend says, “We must all learn to live with the challenges life gives us.”

The quote is a great reminder that we are not alone in our struggles, and that everyone has them!

I have always been fascinated with the “burning times” in Scotland and I wanted to learn more about what started them, who was caught up in them, why there are so few memorials dedicated to the men and women who died, and how witch-fever finally came to an end. I answered all those questions over the course of the five books series. In the pages of A Laird and a Gentleman, I wanted to explore what would happen if one of my heroines was actually a witch…

One thing I found particularly interesting, while writing the All the King’s Men series, there were two substantial academic papers that were published about the victims of this period in Scottish history, and a memorial was erected in Fife dedicated to those who died. I was thrilled to learn that others were as interested in exploring this forgotten moment.

Mariam Swinton is the daughter of the king’s official witch pricker. She spent her entire life hiding who she is from everyone around her. She is damaged and somewhat cruel at the beginning of the book. It was fun watching Mariam grow and change when, for the first time in her life, she is supported and simply loved for who she is by the hero. Mariam’s strength and resilience surprised me. No matter what I threw at her—and I threw a lot at her—she found a way to overcome the obstacles.

Cameron Sinclair is a warrior, a merchant sailor, and just about the nicest man you’ll ever meet. He can be your best friend and your book boyfriend, all wrapped up in tartan cloth.

My favorite scene to write was one of the final scenes where Mariam must use her magic to save everyone and everything she loves. The entire book she fears using her magic because she will either become like her father who is evil or her mother who is good—but in the end she risks it all because her love for the hero is greater than her fear.

Mariam gathered the wind at her feet, swirling, gusting, until she could barely stand. Overhead, lightning slashed the sky in jagged bolts. Thunder rattled, loud and booming, over the howling of the wind. The ground beneath her feet pitched and rolled as she gathered her power from the elements around her. The wind writhed and thrashed.
She locked her gaze on Cameron’s as her soul divided; one half leaning toward the light, the other toward the dark. She might have been torn in the past by her two desires, each as strong as the other, but no longer. There was another force inside her stronger than either of those two things.
Love.
Instead of shielding her emotions from him, Mariam allowed all the love in her heart to show on her face, in her eyes as she reached deep inside, grasping every fragment of power she possessed and sent it outward, blasting both Cameron and her mother away from her.
With her next breath, she raised her arms, gathering the churning sky in her mind—all the ash, all the darkness, and all the sickness before her life came to an end.

The most difficult scene for me to write was the one where Mariam and Vivian (from Seven Nights With a Scot) come together to heal those who are falling ill to an unknown illness. And as if the illness isn’t bad enough, a volcano erupts and sends volcanic ash across Scotland. This was a difficult scene for me because I live in the Greater Seattle area and when Mount Saint Helens erupted on May 18th, 1980 I witnessed that eruption and the fallout of the ash for weeks afterward. I used my own memories from that time to add realism to the scene.

Mariam sat upright and looked at the sky. The world around them fell silent—devoid of all noise. The clouds overhead shifted from gray to black and the sun disappeared, blotted out by sudden darkness. The wind that had been so sweet moments before was suddenly filled with the smell of sulfur. Dry leaves flew up in a whirlwind of rustling brown and gold, striking Mariam’s body and leaving a sting of pain behind as they moved on.
“Are you causing the wind?” Vivian asked, her features filled with concern as she stood.
“Nay!” Mariam jumped up as a coil of fear knotted her stomach.
“It must be a dust storm.”
Mariam looked up. The darkness edged forward, until it engulfed them entirely. Visibility dropped until Mariam could only see a hand’s length in front of her. The castle she knew was there, but it had vanished into darkness.
The whole world was simply gone.
A chill chased down Mariam’s spine at the recollection of her dream. Black soot floated in the air, like a fine mist, but it didn’t vanish upon hitting the ground. Nay, upon the earth, it swirled like cold snow, accumulating about her booted feet.
“We must return to the castle,” Vivian said.
“Agreed. I fear this is going to get much worse.” Mariam gulped ashy air as she shuffled slowly forward.

A Laird and a Gentleman definitely showcases my writing style. I write historical books that are filled with adventure and emotion anchored in real historical events.

Without really knowing what was coming…I wrote about an influenza pandemic which was very true to this historical period. When sailors started exploring new lands, they often brought illness back with them. Without immunizations or antibiotics, and less stringent sanitation, it was easy for things like the plague and influenza to wipe out huge portions of the population.

We are living through our own pandemic, and while we don’t have Mariam’s magic to help save the day, we have the “magic” of knowledge, medical facilities, and the possibility of a vaccine that will eventually help. The pandemics of the past eventually died out, and ours will too. In the meanwhile, we can read lots of interesting stories to help keep us entertained.

I just finished the final book in the All the King’s Men series, Much Ado About a Scot. It comes out in October 2020. And I’m starting a new series called The Guardians of the Isles which will feature a little fairy magic!

Giveaway: An ebook copy of A Laird and a Gentleman & 3 Tule ebooks of your choice

To enter Giveaway: Please complete the Rafflecopter form and Post a comment to this Q: What has been the biggest insight for you during the COVID-19 pandemic? Have you learned something about yourself? Started a new hobby?

Excerpt from A Laird and a Gentleman:

At a time when witches are hunted with fanatical zeal, Cameron faces the ultimate test—protect the woman he’s grown to love or risk it all to help her unlock the mystery of her powerful past?

Scottish Laird Cameron Sinclair is one of the king’s elite warriors. Despite his legendary reputation on the battlefield, he’s tasked to protect the daughter of the king’s infamous witch pricker. Cameron does his duty, taking the lass home to his castle and keeping her safe, but he’s not expecting the mysterious beauty to test his every nerve.

Mariam Swinton struggles daily to keep her secrets safe. Her intense attraction to her handsome and astute guardian, who rules the vast Ravenscraig with strength and kindness, scares her almost as much as her growing magical abilities. But danger stalks Mariam. Can she trust Cameron to protect her or must she leave to save herself?

Gerri Russell is the award-winning author of historical and contemporary novels including the Brotherhood of the Scottish Templars series and Flirting with Felicity. A two-time recipient of the Romance Writers of America’s Golden Heart Award and winner of the American Title II competition sponsored by RT Book Reviews magazine, she is best known for her adventurous and emotionally intense novels set in the thirteenth- and fourteenth-century Scottish Highlands. Before Gerri followed her passion for writing romance novels, she worked as a broadcast journalist, a newspaper reporter, a magazine columnist, a technical writer and editor, and an instructional designer. She lives in the Pacific Northwest with her husband and four mischievous black cats.
Website | Facebook | Twitter | Instagram | GoodReads |

« REVIEW: To Catch an Earl by Kate Bateman
REVIEW: Home to Me by Catherine Bybee »

14 Responses to “Spotlight & Giveaway: A Laird and a Gentleman by Gerri Russell”