Hi Nicole and welcome to HJ! We’re so excited to chat with you about your new release, A Merry Texan Christmas! 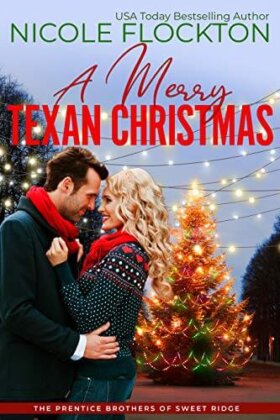 A Merry Texan Christmas is a feel good, small town Christmas romance where love and family win the day.

One of my favorite lines is a bit of a turning point in Trey and Maggie’s relationship. There’s some light hearted banter which leads into a situation where they shared things with each other.

“You’re trying to see what my display is and then you’re going to critique it. Well, you can turn around and march right back to your shop or wherever you were heading. Like everyone else, you’ll get to see it tomorrow morning.”
“I can’t even get a little peek? I promise I won’t breathe a word of it.”
“Please, you think batting your baby blues is going to tempt me to give you a glimpse? You are far too full of yourself, Trey Prentice.”

Well Christmas is the big one. I love everything about Christmas and writing books about the season. This is my fourth one, in fact. I wanted to do a story with a little bit of rivalry so decorating windows seemed like something a little different. Family is also important to me at this time of year so I wanted to create a story where the family dynamic is a big part of it.

Trey is a retired baseball player. He’s returned home after he found a second love while playing his sport – books.

Maggie is the town librarian who lives for 1st December so she can pull out her Christmas skirts and put seasonal bow-ties on her lovable Boston Terrier, Chester. She loves to spread the Christmas cheer around the town as well.

Both characters were fully formed in my mind, in fact I had this idea first for the Prentice Brothers series, but wrote the other two before this one.

As I wrote the story, Trey went from being happy to be retired to maybe not so much. So that was a surprise. And does he stay retired? Well you’ll have to read to find out!

I think my favorite scene is when Trey and Maggie really talk for the first time. They share things with each other that by the end of the conversation they understand each other better. This little snippet is a lead into that scene.

“Maggie, it’s me—Trey.”
Trey?
What was he doing here again? She was sure she’d gotten rid of him when he’d been spying through the window. Whatever plan he had in mind, no way was she letting him in.
“Shush, Chester,” she said as she walked to the front door, opening it a little. “I thought we had this conversation not too long ago. I’m not letting you in.”
Trey held up a drinks tray with two to-go cups in it and a bag from Betty Lou’s Diner. Oh, please don’t be hot chocolate and donuts.
“I come bearing gifts—hot chocolate and donuts.”
Nuts. Had he read her mind and was teasing her, or did he really have those items? Probably more the latter than the former. But she was going to stand strong and firm and not give into the desire to have two of her favorite things.
“I’m not hungry or thirsty. Enjoy yourself.” Maggie at- tempted to close the door but Trey stuck his foot in preventing her from completing her task. She looked down at the offending limb and then at Trey. “Really? That old chestnut?”
Trey waved the bag. “Donuts not chestnuts. And they’re peppermint infused. Same with the hot chocolate. Betty Lou told me how much you love peppermint.”
Of its own free will her mouth watered. Dinner had been a long time ago.
No, don’t be tempted.
But the thought of the sugary, peppermint treat in Trey’s hand was so tempting. It was like she had an angel and a devil on her shoulder. One telling her to stay strong, the other telling her, one little bite won’t matter. They could eat outside and then he wouldn’t see her display at all.
Trey waved the bag again and she caved.

Hmm probably one of the difficult scenes to write was between the brothers. Their relationship is strained and when Trey finds out that his brothers are having their usual monthly lunch – without him, he feels betrayed because he thought their relationship was starting to get on an even keel.

“Trey Prentice, you know what I’m going to have to do?” Sally, the main server at Silver Spurs, sidled up to him, scissors in her hands.
“I’m counting on it, Sally.” He laughed and lifted the tie so she could cut it.
Once she completed the task, she inspected it. “A Christmas one, huh? I don’t think we’ve got one of those.” He winked. “This place needs a little Christmasfying.”
She chuckled and tucked the tie and scissors in her apron pocket. “So I take it you’re here to meet with Tate and Tyler? They’re here for their monthly lunch.”
His brothers had a regular monthly lunch? And they
didn’t invite him his first official month back in town? His smile faltered, but he forced it to stay in place. No way was he going to let Sally know how her words affected him. “Not today, my purpose here has been completed. I’ll see you around.”
Trey hurried back out before his brothers could see him, ripping at the tattered edges of the tie still around his neck. Balling it up, he tossed it in the trash can on his way to his vehicle.
He sat in his car but didn’t turn it on. A gamut of emo- tions whirled in his mind.
Had he assumed things with his brothers were okay after the tree decorating at the farm? They’d had a difference of opinion about how to decorate the branches, but when he and Maggie had left, everything seemed to be good between them all. They’d reached a common ground.
Hell, weren’t he and Tyler in a good place now? Had he read the situation all wrong? Geez, he could read the way a pitch was going to come, but when it came to his brothers he was batting blind.

This book very much showcases my style. You get heart, emotion, laughs, sweet times and sexy times and most of all a happy ever after.

I would love for readers to get into the Christmas spirit after they finish reading A Merry Texan Christmas– it’s been a tough year. And to appreciate those around you. I live half a world away from my family and I miss them the most at Christmas. Maybe this year is a year they create a new tradition too.

I’m currently working on the second book in Station 7: Crew 5 fire fighter series. I have one more book coming this November which starts of a new Navy SEAL series set in Susan Stoker’s Operation Alpha world. For next year I have five planned releases.

Excerpt from A Merry Texan Christmas:

This former all-star never knew Christmas could be so competitive.

Former baseball star Trey Prentice is happily adjusting to life as a bookstore owner in his hometown of Sweet Ridge, Texas. While he loved his competitive and elite lifestyle in New York, he craved a quiet life with friends and family more. As Christmas approaches, Trey is excited to decorate his newest venture and participate in the town’s holiday traditions. He never expected to find himself battling Sweet Ridge’s very own Miss Christmas. Game on.

The only thing librarian Maggie Watson loves more than books is Christmas. She’s even earned the nickname of Miss Christmas because she decorates shop windows and spreads Christmas cheer around town. But this year she’s got some competition. No way is she going to let the cocky Trey Prentice take away her Christmas crown, even though he makes her heart flutter.

When their verbal sparring turns to flirting, Maggie finds there’s more to life than books and Christmas. But will her past insecurities steal her newfound happiness?