Hi Andrea and welcome to HJ! We’re so excited to chat with you about your new release, Adventure with a Secret Prince!

Hi Readers! Thanks for being here. 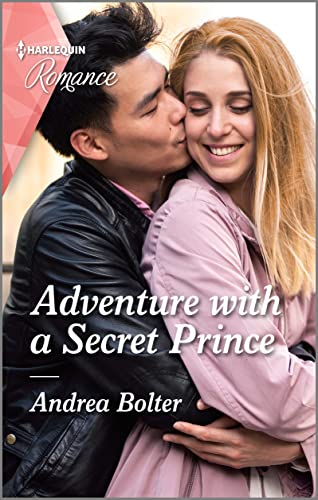 Prince Ras is set to marry a princess he doesn’t love. But first he’s going to experience his dream of traveling without all the princely pomp and protection that usually surrounds him. Gracie is out for a reset after heaving her heart broken. Together, the journey they take is to each other.

“Take the controls,” Ras said after a while.
“What?”
“You do it. You fly the plane.”
Shock widened her eyes. “Ras, I don’t know how to operate a plane.”
“I’ll talk you through it. Take hold of the yoke.” He pointed to the U-shaped handle that was twin to the one he was using to maneuver their flight.
“I can’t. You don’t want to die, do you?”
His laughter bounced around the cockpit.

I’ve visited all of the places Ras and Gracie go to but I had so much fun looking up the details at each place. I’d wanted to write about the US east coast because there’s so much to see there. I only got from Miami to New York with this book, so I guess I’ll have to do another that takes place in New England!

Ras and Gracie are able to have straightforward conversation with each other. They have a connection right away. Ras finds Gracie down to earth. And he makes Gracie feel respected and encouraged. As the book goes on, though, their differences get in their way.

They make love on the ship, let’s say in several locations on it:

When she lifted her arms up and around his shoulders, yearning coursed through him. His hands slid down her sides and to her waist, where he pulled her tightly against him, wanting to shore up any gaps between their two bodies. With her back against the ship’s railing, he moved into her, a crush of their bodies with every kiss, using the groove he created with her in the nightclubs of Miami. But now they provided the melody themselves in a dance only for them. And the ocean. And the moonlight. And the heavens.

Gracie and Ras experience deep emotions in the course of the story along with silliness and the thrill of travel.

I’m working on a best man and maid of honor romance. I’m enjoying planning the wedding!

Giveaway: Signed copy of Adventure with a Secret Prince (paperback or e-copy if in the US, e-copy only if outside US)

To enter Giveaway: Please complete the Rafflecopter form and Post a comment to this Q: Gracie flies a plane even though she doesn’t think she can do it. Do you have something that would be considered daredevil that you’ve done or always wanted to?

Excerpt from Adventure with a Secret Prince:

They started in Miami…
And found forever in New York! Prince Ras has a few weeks of freedom left before he must marry for duty. He doesn’t plan on wasting a second! But when he meets Gracie aboard a cruise ship, he recognizes the same need for adventure in her eyes. As they travel the East Coast, Gracie welcomes the distraction, which takes her further from her disastrous past—and closer to Ras! Except the secret he’s hiding could change everything…
Book Links: Amazon | B&N | iTunes | kobo | Google |

Andrea Bolter has always been fascinated by matters of the heart. In fact, she’s the one her girlfriends turn to for advice with their love lives. A city mouse, she lives in Los Angeles with her husband and daughter. She loves travel, K-Pop and rock n’ roll, sitting at cafés, and watching romantic comedies she’s already seen a hundred times. Say hi at andreabolter.com.
Website | Facebook | Twitter | Instagram | GoodReads |

15 Responses to “Spotlight & Giveaway: Adventure with a Secret Prince by Andrea Bolter”