Today, HJ is pleased to share with you Tarryn Fisher’s new release: AN HONEST LIE

An Honest Lie is riveting suspense, but it’s also a scream of defiance, a howl of rage. 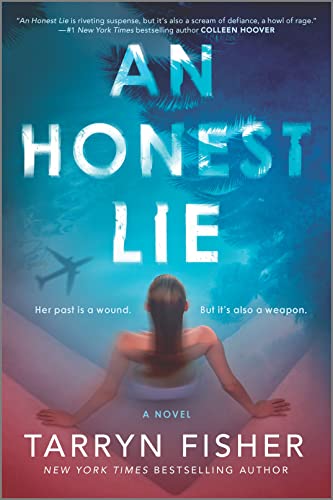 Lorraine—“Rainy”—lives at the top of Tiger Mountain. Remote, moody, cloistered in pine trees and fog, it’s a sanctuary, a new life. She can hide from the disturbing past she wants to forget.

If she’s allowed to.

When Rainy reluctantly agrees to a girls’ weekend in Vegas, she’s prepared for an exhausting parade of shots and slot machines. But after a wild night, her friend Braithe doesn’t come back to the hotel room.

And then Rainy gets the text message, sent from Braithe’s phone: someone has her. But Rainy is who they really want, and Rainy knows why.

What follows is a twisted, shocking journey on the knife-edge of life and death. If she wants to save Braithe—and herself—the only way is to step back into the past.

This seething, gut-punch of a thriller can only have sprung from the fiendish brain of Tarryn Fisher, one of the most cunning writers of our time.

Looking for more great reads by Tarryn Fisher? Don’t miss The Wives and The Wrong Famil

Enjoy an exclusive excerpt from AN HONEST LIE

Excerpt. ©Tarryn Fisher. Posted by arrangement with the publisher. All rights reserved.

Giveaway: One Print copy of AN HONEST LIE to anyone in the U.S.

Tarryn Fisher is the New York Times and USA TODAY bestselling author of nine novels. Born a sun hater, she currently makes her home in Seattle, Washington, with her children, husband, and psychotic husky. She loves connecting with her readers on Instagram.

27 Responses to “Spotlight & Giveaway: An Honest Lie by Tarryn Fisher”