Today it is my pleasure to Welcome author Anna Harrington to HJ!

Hi Anna and welcome to HJ! We’re so excited to chat with you about your new release, An Inconvenient Duke! 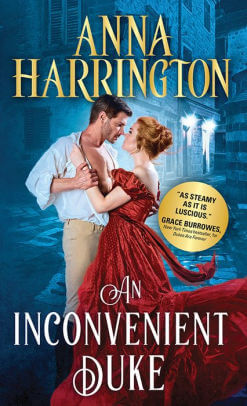 When Marcus Braddock’s sister Elise died, he was a genera away at war. But now that he’s returned as a duke, he’s discovered some troubling information that leads him to believe that her death wasn’t an accident. He goes on the hunt to find the person responsible, enlisting the reluctant help of Danielle Williams, his sister’s best friend who has been secretly running a network which helps women in need. As they work together to learn the truth, clues lead them to suspect that Elise was murdered by a criminal organization called Scepter—an organization that now wants to silence both of them. Marcus will do anything he can to keep Dani safe, but Dani refuses to give up her work with the network, even if it means risking her life the same way Elise risked hers.

“Only a damn fool wants a submissive woman.”

D is for…a duke who is determined to find answers
U is for…a couple who is uncompromising in their convictions to help others and uncover the truth
K is for…the keepsake music box Marcus gives to Dani in memory of his late sister
E is for…ever after, of course!

The society party! Picture it — in the midst of a ball, the dashing war hero turned duke is determined to learn the truth about his sister’s death and so interrogates her best friend, who is just as determined to keep her own secrets while also harboring a long-time affection for him, and all of it happening…while waltzing! The actors have to dig deep emotionally to set up the complicated tug-o-war between their distrust and their affection for each other, and they have to make it all believable while whirling about the dance floor. I’d pay good money to see Chris Pine and Jennifer Lawrence try to do that!

And here’s the snippet:
Dancing with Marcus proved just as wonderful as Dani had always suspected it would be during all those evenings as a young miss when she’d watched him partner with other women beneath the glittering chandeliers at so many otherwise forgotten parties. Although nervous suspicion still lingered inside her, so did pleasure, helped along by the hard muscles in his legs that she tried unsuccessfully not to notice every time they accidentally brushed against hers in the tight turns they were forced to make on the crowded dance floor. She couldn’t help but follow yieldingly in his arms, couldn’t help but ignore the rest of the world spinning around them.
When his lips curled faintly into a smile, a jolt of raw attraction sparked inside her so unexpectedly that it shocked the daylights out of her.
“You seem surprised,” he said, amusement coloring his voice. “You didn’t think I could waltz?”
He’d misunderstood her stunned bewilderment. Thank God, because she couldn’t have borne the humiliation if he realized how her body tingled in response to his.
“I thought you’d be rusty in your steps,” she dodged. “I didn’t think you’d have had much opportunity to practice during the past few years.”
“Not often, that’s true. And my horse made for a damnably clumsy partner.”
She laughed despite the fluttering butterflies in her belly. “Four left hooves?”
He grimaced. “The rascal kept wanting to lead.”

I want everyone to a rollicking good time! This is a fast-paced book with plenty of action but also elements of traditional romance, trips into London’s seedy criminal underworld but also waltzing at a ball, lots of tearful revelations but also lots of humor…one I hope that readers can’t put down. Of course, there’s information about how women were treated during the Regency, but the whole series was inspired by all those heart-thumping, action-packed comic book hero movies that have been coming out recently—good vs. evil, all a bit larger than life, and just great fun.

“Trust each other! You both want the same things; you just need to trust in the other to help you achieve them.” When the book opens, they’re not enemies and it’s not a second chance at love—but they don’t trust each other, with both keeping secrets that could come back to haunt them. They’re both fiercely independent, strong, and headstrong people, and neither of them wants to admit that they need help and that they need each other until their lives are in danger.

Giveaway: A paperback copy of An Inconvenient Duke by Anna Harrington

To enter Giveaway: Please complete the Rafflecopter form and Post a comment to this Q: What is it about comic book superheroes that makes us love them so much?

Excerpt from An Inconvenient Duke:

All’s fair in war…and in love…
Marcus Braddock, former general and newly appointed Duke of Hampton, is back from war. Now, not only is he surrounded by the utterly unbearable ton, he’s mourning the death of his beloved sister, Elise. Marcus believes his sister’s death wasn’t an accident, and he’s determined to learn the truth—starting with Danielle Williams, his sister’s beautiful best friend.

Danielle is keeping deadly secrets of her own. She has dedicated her life to a charity that helps abused women—the same charity Elise was working for the night she died. When Danielle’s work puts her life in danger, Marcus comes to her rescue. But Danielle may not be the one in need of rescuing…

Anna Harrington is an award-winning author of Regency romance. She writes spicy historicals with alpha heroes and independent heroines, layers of emotion, and lots of sizzle. Anna was nominated for a RITA in 2017 for her title How I Married a Marquess, and her debut, Dukes Are Forever, won the 2016 Maggie Award for Best Historical Romance. All About Romance named her Best Debut Historical Romance Author for her first series, The Secret Life of Scoundrels. A lover of all things chocolate and coffee, when she’s not hard at work writing her next book or planning her next series, Anna loves to fly airplanes, go ballroom dancing, or tend her roses. She is an English professor in Chattanooga, Tennessee. www.AnnaHarringtonBooks.com

37 Responses to “Spotlight & Giveaway: An Inconvenient Duke by Anna Harrington”