Today it is my pleasure to Welcome author Tracy Solheim to HJ!

Hi Tracy and welcome to HJ! We’re so excited to chat with you about your new release, Between Love and Honor! 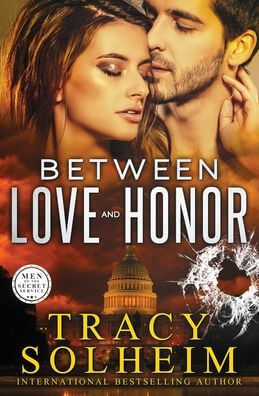 The country’s top cyber asset, Ben Segar, is suddenly reunited with the woman who ghosted him at their senior prom thirteen years earlier. Quinn Darby has been living a double life literally since the day she was born. When the two cross paths again, they find themselves embroiled in a cat-and-mouse game with the enemy—and each other. Neither knows the other is a covert operative. Soon, Ben is risking his job, national security, and his life for a woman he swore to never trust again. And as Quinn does her best to protect Ben, she begins to question the life that took her away from him in the first place. As the case intensifies, so does the heat between them, until the op’s greatest casualties may be their hearts.

There are lots of funny lines between the three Secret Service agent buddies as they banter with one another, and many are my favorites. But I think one of the most significant lines in the book is when Ben utters, “I thought you were dead.” It shows both the readers and Quinn that he is vulnerable and not so blasé about her turning up out of nowhere after thirteen years. For Quinn, the line shocks her because she’s not used to anyone caring if she’s dead or alive. She’s not sure how she feels about another human being worrying about her. She’s been a one-woman show for so long. It’s a subtle turning point in both the character’s journey within the story.

I’ve always wanted to write a book involving spies—especially one where you don’t always know who is on what side. The movie No Way Out is a favorite of mine, and I wanted to write something similar. Unfortunately, since this is a romance requiring an HEA, I couldn’t exactly end it with the same dramatic twist as in the movie. Or could I?

Ben was easy to write. As one of the “band of brothers” in this trilogy, he’s been featured in the two books preceding this one. He’s the boy scout of the bunch, always prepared to MacGyver something. He’s brainy, loyal, and perpetually hungry. But, as we find out in this book, there’s a lot more to him than his friends think. He’s been living a double life, one that he’s kept secret from everyone he knows. The work is challenging and enables him to outwit criminals with his greatest weapon—his mind. But the lonely existence is wearing on him.

Quinn was the most difficult character I’ve ever written. Seriously, it took me three attempts to get her right. She needed to be compelling yet empathetic enough that readers would like her even when they were unsure if she was working for our side or against it. To get her psyche as a ruthless operative correct, I researched all the articles I could find on female CIA agents and their experiences. As one would expect, there wasn’t much out there, but I was able to find some nuggets that I incorporated into Quinn’s personality.

I have lots of favorite scenes, but this one stands out because it illustrates the push-pull between two agents who don’t know the other one is also an agent. Each one thinks they are protecting the other.

“He tried to kill you,” he murmured against her soft skin. “Don’t you dare try to protect him.”
“I’m not protecting him,” she whispered.
She was protecting someone. Every fiber of his body was telling him so.
“Talk to me, Quinn. Let me help you.”
Gripping the towel wrapped around her with one hand, she reached up with the other to trace her fingers along his jaw. “This is something I need to handle myself.”
Unable to tame his frustration, he gave her body a little shake. Who the hell did she think she was, Wonder Woman?
She caressed his cheek with her palm. “Please, Ben. It’s best for everyone. Let me go.”
Let me go.
Those three little words seemed to unleash something within him. The roaring in his ears was brought on by years of pent-up emotions wondering why she’d left and what had become of her. And agonizing over ‘what if?’ No way was he letting her go again. Not until he had answers.
And maybe not even after that.
“I didn’t pull you out of the damn Chesapeake Bay to let you go,” he growled.
And before either of them knew what was happening, he captured her mouth in a fierce kiss.

If I give a snippet of this, it will spoil the plot for readers. Sorry!

I think my writing style is consistent throughout all my books. I enjoy creating books with family members or close friends who have each other’s backs. Fun, sexy banter is also something I’m known for. Where this series of books differ is the suspense element. Whenever I got bogged down, I could just kill someone off or blow something up. It was quite cathartic.

Mainly, I hope it’s a fun escape for readers. The world is so crazy right now. It’s nice to leave it behind for a few hours. Throughout this series, I’ve highlighted places in Washington DC and the surrounding area that I visit with my family. For this book, that included the US Botanic Gardens next to the Capitol. It’s free to visit, and I hope my descriptions will inspire others to seek it out when they are in the nation’s capital. National Harbor and the Capitol Wheel shouldn’t be missed either. Just don’t ride that VIP car alone!

I started out writing sports romance, and right now, I’m creating a new series of rom-coms featuring a new team—the Milwaukee Growlers. The first book is a twist on The Proposal featuring a kilt-wearing placekicker, a pink-haired loner, and their Star Wars-themed marriage of convenience!

Giveaway: An ebook copy of Between Love and Honor and 3 Tule ebooks of your choice

To enter Giveaway: Please complete the Rafflecopter form and Post a comment to this Q: If you were a spy, what would your code name be?

Excerpt from Between Love and Honor:

Will their double lives deceive their hearts?

The Secret Service’s number one cyber asset, Special Agent Ben Segar, has a reputation for playing it straight… until a top-secret assignment has him cozying up to an enigmatic beauty from his past – his runaway prom date. Now, he’s willing to break a few rules to even the score, including unmasking a potential traitor, which would make his revenge even sweeter.

Photographer Quinn Darby was born into the spy game. When her life is threatened, she turns to the one man she knows she can trust, but Ben is no longer the mild-mannered lab partner she once loved. Instead, he’s a full-grown, alpha-man whose appeal is even more irresistible. She’s vowed to never again deceive him, but to protect him, she must keep her double life a secret.

Soon, Quinn and Ben are embroiled in a cat-and-mouse game with the enemy – and each other. As the case intensifies, so does the heat between them. Will the greatest casualties be their hearts?

Tracy Solheim is the international bestselling author of the Out of Bound Series for Penguin. Her books feature members of the fictitious Baltimore Blaze football team and the women who love them. In a previous life, Tracy wrote best sellers for Congress and was a freelance journalist for regional and national magazines. She’s a military brat who now makes her home in Johns Creek, Georgia, with her husband, their two children, a pesky Labrador retriever puppy and a horse named after her first novel.
Website | Facebook | Twitter | Instagram | GoodReads |

28 Responses to “Spotlight & Giveaway: Between Love and Honor by Tracy Solheim”