Today it is my pleasure to Welcome author L.E. Rico to HJ!

Hi L.E. Rico and welcome to HJ! We’re so excited to chat with you about your new release, Blame it on the Bet! 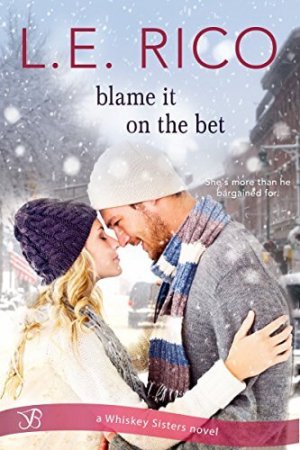 M is for: Marriage—and the crazy things that can happen on the way there.
A is for: Adorably horrible toddler
Y is for: You’ll want to move to Mayhem!
H is for: Hilarious, Heartwarming
E is for: Entertaining, escapist—spend a little time in Mayhem, MN!!
M is for: Memories of the past—and honoring them in the present.

“Swans?” Bailey asks, fork poised midway between her plate and her mouth. “Really? Swans?”
“Sure, why not?” Bryan responds amiably.
“Uhhh…because all the water will be frozen. Where do you expect these swans to be? In the bathtub?” Walker pipes up from across the table.

Oh, wow… Yeah, I guess it would have to be the “Flaming Puppets” scene in the Baby Bedlam portion of Mistletoe in Mayhem… Mainly because I was laughing so hard I couldn’t type…

Father Buddy has ducked behind the altar to pull out two bright red, black-horned devil moppets. One is your basic, garden variety Mephistopheles. A “worker bee” devil, if you will—with a white number one on his chest. The other is much more sophisticated—a sort of metrosexual Satan with wavy, dark yarn hair and matching beard. He’s dressed in a white, button-down shirt and a black cape. Oh, yeah, this is the head heathen for sure.
We’re all riveted as Father Buddy dons first one puppet and then the other, his hands bringing the two characters to life.
“There is a fable,” the priest begins, facing the congregation, “that tells of three apprentice devils who were coming to earth to finish their apprenticeship. They were talking with Satan, the chief of the devils, about their plans to tempt and to ruin humanity.”
At this point, the lesser devil—on the left hand—addresses the uber devil on the right.
“I will tell them there is no God,” the first devil puppet says to Satan and I’m transfixed by Father Buddy, who’s lips barely move as he delivers these lines on behalf of the puppets.
“‘That will not delude many, for they know there is a God,’ Satan replies.
That’s when the second devil comes along,” Father Buddy informs us, taking the less-impressive devil, putting it behind his vestments and pulling it out again—this time with a white number two on its chest.
“How did he do that?” Scott whispers from next to me. “He’s got puppets on both of his hands! How do you suppose he swapped out the numbers like that?”
Before I can tell him I don’t know—and I don’t really care—the homily resumes. “The second devil said, ‘I will tell them that there is no hell.’ Satan answered, ‘You will deceive no one that way, they know even now that there is a hell for sin.’
Whoa. Satan is not having that answer either. Away with devil number two—behind the back once more, returning with the number three emblazoned on him this time around. Father Buddy continues his narration.
“The third devil said, ‘I will tell them that there is no hurry.’”
Clearly devil number three is “the man” as Satan is high-fiving him after this suggested course of action.
“‘Go,’ said Satan,” Father Buddy conveys, “‘and you will ruin people by the thousands.’” At this point, the priest drops both of his arms down to his sides, so that the fuzzy characters are hanging upside down. “The point here, my friends, is that the most dangerous of all delusions is that there is plenty of time. We think we have forever to ensure our mortal souls will live on in the kingdom of heaven. We do not. And anyone who is fool enough to believe he has all the time in the world, will find himself in a very, very precarious position…”
I’ve stopped hearing what Father Buddy is saying. Everyone has. Because, what he doesn’t know, is that the impressive mane on Satan’s head has gotten a little too close to one of the candelabras and in, an instant, his hair is on fire. Literally.
“…that’s why we must ask for guidance from the Lord…” the priest drones on, totally unaware as we all just stare, as if hypnotized by the devil himself.
“Father! You’re on fire!” a young acolyte yells from the side of the alter where he’s just looked up from his iPhone to see the catastrophe in the making.
Father Buddy looks over his shoulder at the teenager and smiles proudly. “Why, thank you, young man! But you really should hold your compliments for after the end of the sermon…”
“No! You’re on fire!” the choirmaster calls out.
At last the spell is broken as parishioners point at the dangling inferno and yell.
I don’t know if it’s the increasing alarm…or the increasing heat, but Father Buddy finally realizes what’s happened.
“Oh! Oh, my dear… Oh! Oh! Oh!” he exclaims, using little devil to pummel Satan in an attempt to snuff him out. No such luck—this tactic only serves to propel the lesser Lucifer into his own blazing ball. The priest stands there, both hands raised in front of him, looking from one fiery hand to the other.

That—no matter what—at the end of the day, it’s your family who will be there for every step of the way. And I use the term “family” loosely because, in this instance, the entire town of Mayhem rallies around the O’Halloran sisters—their native daughters, so to speak.

To enter Giveaway: Please complete the Rafflecopter form and Post a comment to this Q: What’s the funniest thing you’ve ever seen happen at a worship service or wedding, christening, etc?

Welcome to Mayhem, Minnesota, where the cats wear sweaters, the local priest dispenses dating advice, and you can find your fortune in the bottom of a pie tin.

When her family’s pub is threatened with foreclosure, Hennessy O’Halloran, along with her three sisters, is determined to raise enough money to keep it out of the hands of the L.A. real-estate developer trying to raze it and replace it with a—god forbid!—multiplex theater.

Bryan Truitt always gets what he wants. And what he wants is the sweet corner property on Mayhem’s Main Street where O’Halloran’s Pub sits. But his “quick business” turns into more than he bargains for when he meets the feisty Hennessy. Next thing he knows, he’s betting her he can outlast Mayhem’s punishing winter in time to make the pub his—or he’ll gift it to her for free.

Hennessy knows better than to flirt with the enemy. But suddenly Bryan’s not sure which he wants more…the property or the woman who owns it.

L.E. Rico didn’t set out to be an author. In fact, she’s made a name for herself as a classical music radio host—doing her best to make the music and the composers relevant by putting them into a modern context. It was just a few years ago that she discovered a passion for writing that blossomed into an entire novel. And then another. And another. And, while she still spends plenty of time on the radio, telling the stories of the great composers, she spends even more time composing her own great stories.
www.LaurenRico.com
Twitter: @TheLaurenRico
Instagram: LaurenRicoAuthor.

54 Responses to “Spotlight & Giveaway: Blame it on the Bet by L.E. Rico”