Today, HJ is pleased to share with you Jayci Lee’s new release: Booked on a Feeling.

Jayci Lee’s romcom Booked on a Feeling features an overachieving lawyer. A failing bookstore. A childhood friend. And the chance of a lifetime… 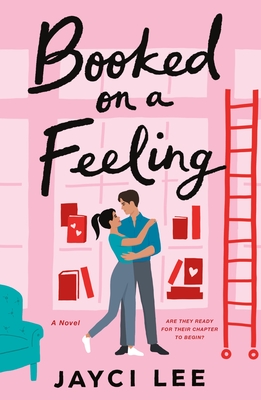 If all goes to plan, she will check off that last box in a couple years, make her parents proud, and live a successful, fulfilled life in L.A. What was not in her plans was passing out from a panic attack during a pivotal moment in her career. A few deep breaths and a four hour drive later, Lizzy is in Weldon for three weeks to shed the burnout and figure out what went wrong. And what better place to recharge than the small California town where she spent her childhood summers with her best friend, Jack Park.

Jack Park didn’t expect to see Lizzy back in Weldon, but now he’s got three weeks to spend with the girl of his dreams. Except she doesn’t know of his decades-long crush on her–and he intends to keep it that way. She’s a high-powered attorney who lives in L.A. and he’s a bookkeeper at his family’s brewery who never left his hometown. He can’t risk their friendship on a long shot. Can he? When Lizzy decides that the local bookstore needs a little revamp, of course, Jack is going to help her bring it back to life. But the more time they spend together, the harder it becomes to ignore there might be more than just friendship among the dusty shelves and books…

Sometimes the path to the rest of your life has been in front of you all along.

Enjoy an exclusive excerpt from Booked on a Feeling

From Booked on a Feeling by Jayci Lee. Copyright © 2022 by the author and reprinted by permission of St. Martin’s Publishing Group.

Giveaway: One print copy of BOOKED ON A FEELING by Jayci Lee , US winner only.

JAYCI LEE writes poignant, sexy, and laugh-out-loud romance every free second she can scavenge and is semi-retired from her fifteen-year career as a defense litigator. She loves food, wine, and travelling, and incidentally so do her characters, in books like The Dating Dare and A Sweet Mess. Jayci lives in sunny California with her tall-dark-and-handsome husband, two amazing boys with boundless energy, and a fluffy rescue whose cuteness is a major distraction.

« REVIEW: My Better Life by Sarah Ready
Spotlight & Giveaway: In Her Boots by KJ Dell’Antonia »

29 Responses to “Spotlight & Giveaway: Booked on a Feeling by Jayci Lee”