From Wendy Roberts, author of Grounds to Kill and the Bodies of Evidence series, comes a new paranormal mystery featuring an amateur sleuth kindling a deep secret… 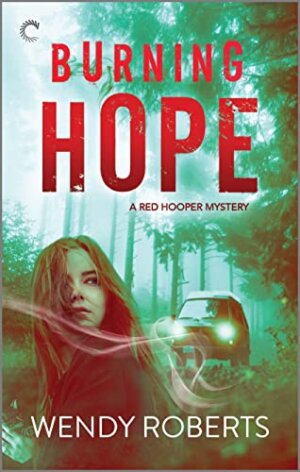 Red Hooper’s never been what you’d call lucky, but searching for coffee and finding a dead body instead takes things to a whole other level. Even worse, she and her camper van, Bubbles, just rolled into town, and being the new girl makes her suspect number one.

Red never lingers in one place for long—she’s got secrets better left undiscovered—and this time she’s definitely overstayed her welcome. Caught in the crosshairs of a police investigation and creeping to the top of the real murderer’s to-do list, Red will have to plant some roots if she’s going to survive.

Easier said than done. It seems like everyone in town has made up their mind about Red…except the mysterious Noah Adams. The gruff townie might be the key to proving her innocence—if he doesn’t bring even more trouble her way. Together they unravel the mystery surrounding the murder, but Red will be forced to embrace her psychic gifts if she’s going to clear her name before the real murderer snuffs her out.

Excerpt. ©Wendy Roberts. Posted by arrangement with the publisher. All rights reserved.

Giveaway: One (1) eBook copy of BURNING HOPE by Wendy Roberts (open to the US and Canada).

Wendy Roberts is a mystery & supernatural writer. She is the author of 4 novels in the Bodies of Evidence series, 5 Ghost Dusters mysteries, as well as Dating Can Be Deadly, & Grounds to Kill. Wendy resides in Vancouver Canada. When not at her desk, you may find Wendy in a forest writing inside her camper. website: www.wendyroberts.com Instagram: @wendyroberts_author Facebook: www.facebook.com/WendyRobertsAuthor TikTok: @wendyroberts_author