Today, HJ is pleased to share with you Sariah Wilson’s new release: Cinder-Nanny

What could come between a nanny and an earl in a fairy-tale love story? A reality check—in an endearing and witty romance by Sariah Wilson 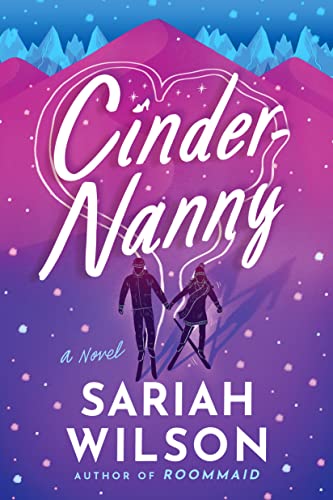 With her sister’s medical bills mounting, Diana Parker can’t say no to a high-paying opportunity like this: accompany a wealthy couple to Aspen and nanny their precocious five-year-old son for three months. Necessary qualifications? She must know how to ski and teach math, speak fluent French, excel at social graces, and hold a master’s degree in childhood development. Who’ll be the wiser that Diana’s only skill is packing for Colorado?

So far, so good—having a con woman for a mother has turned out to be a benefit, even if Diana has complicated feelings about telling lies. But she’s doing this for her sister. And the perks—like a ticket to a lavish charity fundraiser, a new gown, and a Prince Charming–adjacent earl named Griffin Windsor—are pretty irresistible. Diana can’t deny the Cinderella vibe.
Wary of gold diggers and scandal, England’s most eligible bachelor is nevertheless falling for Diana, and sweeping the not-quite princess off her feet.

The warmer their relationship becomes, the slipperier the slopes are for Diana. Sooner or later, she’ll have to come clean. When that happens, does an honest-to-goodness happy ending stand a chance?

Enjoy an exclusive excerpt from Cinder-Nanny

Excerpt. ©Sariah Wilson. Posted by arrangement with the publisher. All rights reserved.

Giveaway: One print copy of Cinder-Nanny (US only)

Sariah Wilson is the author of CINDER-NANNY (June 21, 2022; Montlake). A passionate believer in happily-ever-afters, Sariah and her own soulmate live in Utah with their four children and the two family cats. Her belief in true love has inspired many other standalone novels including ROOMMAID (2020), THE SEAT FILLER (2021) and THE PAID BRIDESMAID (2022), and several bestselling romance series, including End of the Line (THE FRIEND ZONE, JUST A BOYFRIEND); Lovestruck (#STARSTRUCK, #MOONSTRUCK, #AWESTRUCK); Ugly Stepsisters (THE UGLY STEPSISTER STRIKES BACK; PROMPOSAL), and Royals of Monterra (ROYAL DATE, ROYAL CHASE, ROYAL GAMES, ROYAL DESIGN). You can connect with Sariah online at sariahwilson.com.

« REVIEW: Between Hello and Goodbye by Emma Scott
REVIEW: In Bali with the Single Dad by Annie O’Neil »