Hi Melanie and welcome to HJ! We’re so excited to chat with you about your new release, Cinderella’s Invitation to Greece (Weddings Worth Billions Book 1)! 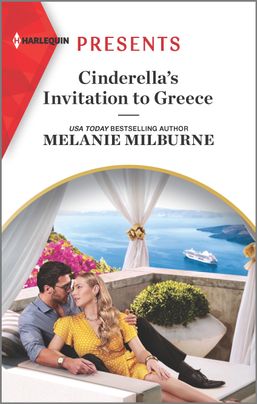 Lucas Rothwell, a brooding billionaire, who is currently blind after surgery is keen to hide away from the spotlight. But when the housekeeper’s granddaughter Ruby Pennington turns up and begs him to allow her to host a celebrity wedding at his remote Yorkshire castle, he has to come up with a compromise and fast. She can host the wedding but she must first come with him to his private island in Greece.

I loved writing the end of Chapter One as up until the last line, Ruby has no idea that Lucas is blind.
Snippet:

Lucas placed his broad-spanned hand over hers and lifted it off his arm as if it was speck of lint. ‘Do you really think that tactic is going to work?’
His tone was liberally laced with scorn and another wave of heat flowed to her cheeks.
Ruby glowered up at him, but all she could see was her own furious reflection in his aviator glasses. ‘Firstly, I’m not leaving until you agree to hear me out. And secondly, I can’t leave my gran struggling all by herself with a burned wrist. Why haven’t you engaged another housekeeper? This place is clearly too much for her now.’
‘She insists she doesn’t want to retire.’
‘But can’t you see how neglected this place is at the moment? There are cobwebs everywhere.’
His mouth went into a thin tight line. ‘No, I can’t see.’
Something about his bleak-sounding tone made Ruby frown. ‘But there’s heaps of them. Look at that one at the top of the window, and on the light there. You’d have to blind not to see them.’
The line of his mouth became embittered. ‘But that’s exactly my point—I am blind.’

It’s actually quite tricky writing about someone with a disability and I had to make sure the whole way through the book, when I was in Lucas’s point of view, that I wasn’t allowing him to see things. He could only make out shapes and shadows, but no definition. I actually walked around my house with a blindfold on just so I could concentrate on powering up my other senses. That wasn’t exactly fun because I kept bumping into things. But it gave me a bit of insight in what it is like to be legally blind.

Because Lucas and Ruby already know each other, I had to work on Lucas finally seeing Ruby for the first time, but not with his eyes but his other senses. And Ruby, who always had a bit of a crush on him begins to move from infatuation to love.

When Lucas organises to take Ruby to his private Greek island, she doesn’t realise they will be travelling by helicopter. She is phobic about helicopter flights but his gentle support helps her get through it.

Want a feel good fantasy about Cinderella unlocking the heart of her Prince Charming and living happily ever after.

I am currently doing some slight revisions of Book Three of this trilogy- Forbidden Until Their Snowbound Night, which will be out in January 2022. Book Two- Nine Months After That Night is in out in October 2022.

To enter Giveaway: Please complete the Rafflecopter form and Post a comment to this Q: My hero Lucas is physically blind but he is also emotionally blind until he finally allows himself to fall in love. What issue or situation have you faced where you have been a little blind to the truth about yourself or someone else?

Excerpt from Cinderella’s Invitation to Greece (Weddings Worth Billions Book 1):

Renowned billionaire Lucas Rothwell has a secret he will keep from the world’s media. And he’s shut everything and everyone out to do so. Until gentle wedding caterer Ruby Pennington arrives on his mansion doorstep seeking his help-and discovers the truth.
In exchange Lucas requests payment in kind: a week on his private Greek island, where Ruby will assist in shielding him from the spotlight. But can this determined Cinderella convince Lucas she’s the one person he should let in when seven days become seven dangerously decadent nights?
Book Links: Book Links: Amazon | B&N | iTunes | kobo | Google |

« REVIEW: All Fired Up by Dylan Newton
Spotlight & Giveaway: Desperately Seeking a Duchess by Christi Caldwell »