Hi Annie and welcome to HJ! We’re so excited to chat with you about your new release, Claiming His Virgin Princess!

It’s wonderful to be here again. Happy New Year everyone. Here’s hoping 2022 is a much better year for us all. 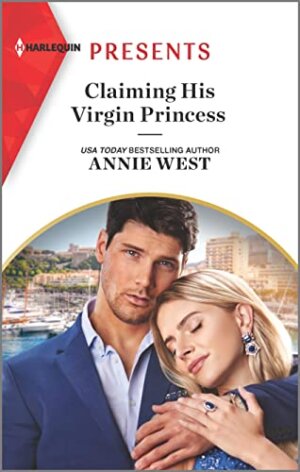 After two disastrous engagements Princess Ilsa is tired of public pity. Her world is falling apart and after a lifetime of putting her people first and herself last, she finds it hard to put on a smiling face. When sexy tycoon Noah Carson sweeps her out of a Monaco club onto his yacht, it’s her chance to live passionately and recklessly for a little while. Until their scandalous affair turns to heartbreak when it seems they want different things. Ilsa tries to protect her heart, but everything changes when she discovers that against all odds, she’s pregnant with the child she’d always wanted and never believed she could have. Can the self-made billionaire from the wrong side of the tracks and the blue-blooded princess build a new sort of fairy tale happy ever after?

For a change I won’t choose one that shows the interaction between the hero and heroine. This one at the beginning, gives us an insight into Ilsa’s situation. On an official visit she walks in on someone reading a gossip magazine with headlines about her broken engagement. She and her ex happily agreed to end their dynastic betrothal but the public doesn’t know the full story. Everyone sees her as a victim and the continual speculation about her love life and her emotions are driving her crazy. The person reading magazine quickly hides it and Ilsa thinks:

She needn’t have bothered. The palace media team briefed Ilsa daily. If she remembered right that one led with “Ilsa Heartbroken as Lucien Flaunts New Lover” then went on to describe her as :tragic and lonely”. Sometimes she wished she didn’t have such a retentive memory.

I felt such sympathy for Ilsa and feel that line tells us a lot about her true feelings, her dry sense of humour and her determination to appear unfazed .

In this case it really is love at first sight, or at least bolt-from-the-heavens attraction at first sight. Noah has previous, bad experience with a privileged woman so his first instinct, after realising how attracted he is to Ilsa, is to avoid her. But his caution lasts only a day because he’s so drawn to her. Especially when she doesn’t act like the shallow, selfish woman he expects. Instead he detects unexpected vulnerability and humour. Ilsa, too, is wary But at the same time, she’s ready to discard hey good girl image and, just for once, to live for the moment … with fascinating consequences.

If you love deep emotion and sexual tension in your romances. Both Ilsa and Noah leapt of the pages when I wrote, the story coming alive in a way that tugged at my heart and made me smile when they found their HEA. I hope you have the same reaction. Plus, if you enjoy gorgeous, exotic locations, this one is for you. From the bazaars of Istanbul to white sand Mediterranean beaches, from glam Monaco to a billionaire’s private yacht, the settings are enough to make anyone dream of their very own romantic escape.

Thanks for asking. My next release is One Night with Her Forgotten Husband, out in April. As well as the amnesia theme, it features a dark, brooding hero and an initially bewildered heroine, who must stand up for herself against the odds. Emotions and sexual tension run very, very high in this one. After that, in August look out for ‘The Desert King Meets His Match’ about a sheikh who hires a matchmaker to find him the perfect wife and ends up finding himself far too distracted by his feisty, sexy matchmaker. That was enormous fun to write. As a writer I love presenting a powerful, alpha hero and making his world unravel around him due to one, special woman.

Giveaway: Two readers will each receive a signed Annie West paperback. It will be another romance featuring a royal princess!

To enter Giveaway: Please complete the Rafflecopter form and Post a comment to this Q: In ‘Claiming His Virgin Princess’ Ilsa and Noah see each other across a crowded room at an official event but actually meet on the dance floor at a party. If you could choose, where would you like to have a hero and heroine meet? If you can’t decide, can you think of a great meeting scene from a book you like?

Excerpt from Claiming His Virgin Princess:

A sheltered princess…
And the man who could set her free!

Hounded by the paparazzi and pitied by the public after two failed engagements, Princess Ilsa of Altbourg escapes to Monaco. She’ll finally let her hair down in private. Perhaps self-made Australian billionaire Noah Carson can help her do that…

Women like Ilsa have always scorned Noah’s humble roots. So when an inferno sparks between them, he’s cautious, even while whisking Ilsa away on his lavish yacht! It’s clear opposites do attract…but if Noah claims her, can he be sure they can bridge the gap between their different worlds?
Book Links: Amazon | B&N | iTunes | kobo | Google |

USA Today Bestselling author Annie West loves writing passionate, intense love stories. She has devoted her life to an in depth study of tall, dark, charismatic heroes who cause the best kind of trouble in the lives of their heroines. Creating heroines who are a perfect match for those strong, stubborn men is one of her all time favorite things. As a sideline she’s also researched dreamy locations for romance, from vibrant cities to desert encampments and fairytale castles. She lives on the east coast of Australia and her favorite things are books, good company, good food and travel. For behind the scenes news, early release information and free giveaways, sign up for Annie’s newsletter: https://tinyurl.com/ya56pe7c then look out in your inbox for your first free read – if you don’t see it check your spam folder.
Website | Facebook | GoodReads |