In Lease on Love by Falon Ballard, Sadie Green has been putting in insane hours for years as a financial analyst to guarantee 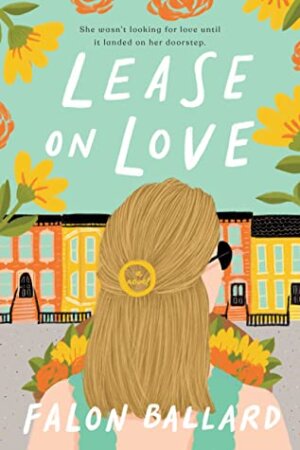 she’ll be the next one promoted to the senior level. So when she doesn’t get the job, things…well, they don’t go so well. Sadie is soon looking for a new job and will likely need a much less expensive apartment. Not easy to find in NYC. She somehow manages to land on her feet, though, when she logs into her roommate-finding app instead of her dating app. And just like that, Jack Thomas enters the picture, offering her a room to rent at bargain basement price. How can a girl refuse? Especially considering Jack was willing to put up with a confused and hungover Sadie when she realized her mistake.

I turn the phone back to face me, feeling like I’m in some kind of horror movie. And then true horror overtakes me. ROOMMATEZ is splashed over the top of my screen, right there in bright orange letters.
“In my defense, I was completely wasted at the time.”
“I don’t think that’s a defense.”

Sadie takes some time to figure out her next career move. Something she’s never had the option of doing before. Her true dream of owning her own florist shop begins to seem more plausible, like it’s time to give it her best shot. But when Sadie’s past keeps niggling at the back of her mind, making her doubt her capability, it’s her awesome friends–and Jack–who step in to boost her up. Along the way, she realizes that for as much as she’s helping Jack break out of his hermit-like ways after losing his parents several years ago, Sadie’s not doing it only as his friend. She would very much like to see where their attraction leads. Even if it scares her to pieces.

I squeeze his hand. “You’re not an emotional disaster.”
“I am. But maybe slightly less of one since you came around.”

A thoroughly modern rom-com that had me in stitches when a bold woman and an introverted man were thrown together as roommates, Lease on Love had sparks aplenty and enough heart to make readers fall in love with this couple hard and fast.

“I think you’re going to be good for me, Sadie Green.”
“Oh, I definitely won’t be. Like literally no one has ever come away from knowing me thinking that, promise,” I blurt out…
“When can you move in?”

Talk about a delightful debut novel! Falon Ballard created a group of characters that I would absolutely love to spend time with in real life, which I think most readers will too. Sadie’s group–the fearsome foursome–was everything. Along with Gemma, Harley, and Nick, she made up a team of friends who were always there for each other in a wonderful way that we all could use in our lives. Not to mention the hilariously epic text threads Ballard wrote between them all. The group occasionally stole the show but not in a way that overshadowed what was happening between Sadie and Jack. It was just a fun bonus–and even added another romance to the mix.

I always love to see how authors handle an opposites-attract trope. In this case, Sadie was boisterous, had a serious(ly funny) potty mouth, and basically had no verbal filter. But she had a good heart. And she was always there for Gemma, Harley, and Nick. Sadie had some self-esteem issues that stemmed from her childhood–something that some readers might have a tough time with. But it did help her understand Jack’s own personal struggles in some ways.

Okay, let me just say that Jack was a superb hero. Kind of beta, charming but not outgoing, and so very, very kind. I couldn’t get enough of him. And I thought that he was the right person to help keep Sadie down to earth and to rein her in when she started doubting herself. My one gripe was the “black moment” between Sadie and Jack. To me it wasn’t the huge issue it was made out to be by one of the characters so in turn wasn’t handled very well in my opinion. I have a feeling Ballard meant for it to be a way for one of them to push the other person away, but it just felt…off a bit. Other than that, I adored Lease on Love and cannot wait to see what Falon Ballard hits us up with next.

QOTD: The text messages in Lease on Love are going to keep me chuckling for quite some time. Have you read any books with texts or letters between characters that have enhanced the story?

Beach Read meets The Flatshare in this warmly funny and delightfully sharp debut rom-com about a down-on-her-luck young woman who turns an innocent mix-up between a dating app and a roommate app into a new chance at love.

She wasn’t looking for love until it landed on her doorstep.

After getting passed over for an overdue—and much-needed—promotion, Sadie Green is in desperate need of three things: a stiff drink, a new place to live, and a one-night stand. When one drink turns into one too many, Sadie mixes up a long-ignored dating app for a roommate-finding app and finds herself on the doorstep of Jack Thomas’s gorgeous Brooklyn brownstone. Too bad she’s more attracted to his impressive real estate than she is to the man himself.

Jack, still grieving the unexpected death of his parents, has learned to find comfort in video games and movie marathons instead of friends. So while he doesn’t know just what to make of the vivaciously verbose Sadie, he’s willing to offer her his spare bedroom while she gets back on her feet. And with the rent unbeatably low, Sadie can finally pursue her floristry side hustle full-time. The two are polar opposites, but as Sadie’s presence begins to turn the brownstone into a home, they both start to realize they may have just made the deal of a lifetime.