Today it is my pleasure to Welcome author Geri Krotow to HJ!

Hi Geri and welcome to HJ! We’re so excited to chat with you about your new release, Colton Bullseye! 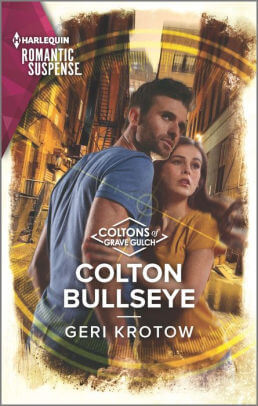 Colton Bullseye is Book 4 in the Coltons of Grave Gulch series. The entire series is popping with scary villains and dangerous situations–all with intrepid heroines who fight alongside their sexy heroes. In Colton Bullseye, Dominique is an investigative reporter seeking justice for a murdered student in her creative writing class she teaches at the County Prison. Stanton is the bodyguard hired by her overprotective father, and also her former lover. They had a tumultuous affair that ended two years ago, but their chemistry has only strengthened during their time apart. They struggle against their attraction while Dominique tracks down the criminal who falsely put her student behind bars.

I love when Stanton takes Dominique back to his family home for safety, where his mother assumes he and Dominique are getting back together. She refers to Stanton with the Italian word for ‘girlfriend’ or ‘fiancee.’ Stanton makes the mistake of speaking with his mouth full.

“Don’t be such a slob around your fidanzata, son.”

Spoken like a Mom, her comment puts them both on the defensive, but in a humorous manner.

I’ve been inspired by investigative reporters like Dominique, who aren’t afraid to dig for the truth, whatever the costs. I was inspired by a close friend who, like Stanton, works in private security for all the hard work they do on a daily basis with little to zero thanks (except for their paychecks).

Oh my gosh, yes! My characters are always coming up with new ways of looking at and reacting to life. Dominique and Stanton surprised me with how passionate of a relationship they share. It’s more than sex or attraction, it’s at a soul level. Add in that they both respect one another on a professional level, and it makes for a very powerful couple. I had to stay on my toes writing them!

When Stanton brings Dominique back to the Colton estate, which is in Northern Michigan, they are left alone when his parents go out of town. Unable to fight their desire any longer, they begin to make love…on the dining room table. 🙂

The final showdown with the villain. I don’t want to give any spoilers, but even I wasn’t sure how it would all work out in the end. Yes, all of the Colton authors write HEAs, and Colton Bullseye is no exception, but getting there can be arduous, especially when an unpredictable villain shows up armed and aiming for the hero and/or heroine.

It definitely highlights my suspense/thriller style, and it stretches my usual heat level for a Harlequin Romantic Suspense. But Dominque and Stanton wouldn’t let me right a tame love scene for them. Nope, not at all!

If there’s a love out there that didn’t work out for you, but you’re both still available, maybe revisit whether you could consider reuniting. I know Stanton and Dominique are glad they did!

I’m hard at work on another Colton book for 2022, and I’m happy to announce I’ve been asked to write a prequel to the 2022 Coltons 2022. Please sign up for my Site News, on my website, to get the details as they’re available.

To enter Giveaway: Please complete the Rafflecopter form and Post a comment to this Q: What are you most looking forward to this spring?

He’d been hired to protect her…not fall back in love!

Acting as his ex’s bodyguard pushes Stanton Colton beyond his limits. Thanks to Dominique de la Vega’s determined investigative reporting, he’s vowed to keep her safe…and guard his own heart. As Dominique delves deep to get her story, Stanton works to find out who’s put a bullseye on her back. But can their rekindled attraction survive a threat on her life?

Geri Krotow is the author of over 28 novels and COLTON BULLSEYE is her 25th book for Harlequin. A Naval Academy graduate and Navy veteran, Geri lives in Pennsylvania with her empty nest family that includes a husband, a parrot, and two happy doggies. Kids boomerang back as needed. Find out more about Geri’s travels and her entire backlist on her website.
Website | Facebook | Twitter | Instagram | GoodReads |