Today it is my pleasure to Welcome author Dawn Altieri to HJ!

Hi Dawn and welcome to HJ! We’re so excited to chat with you about your new release, Dangerous Desires!

Hello, fellow junkies! I’m so excited to be here! 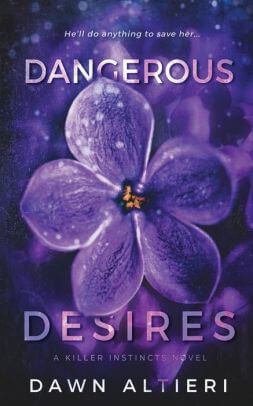 Dangerous Desires is the first book in my Killer Instincts series. It’s the story of Emma Sloane, a young woman stuck in a boring job who has always played by the rules and done exactly what everyone around her expects her to do. She recently lost her fiance in a tragic hit-and-run accident, and now she’s desperate for a fresh start, but her plans are stifled when she is attacked outside her apartment.

NYPD homicide detective Jake Quinn is assigned to Emma’s case, and he quickly realizes he already knows her – he worked her fiance’s case not long ago. He’s never forgotten her, or the fact that he couldn’t solve that hit-and-run. Now he suspects the man who attacked Emma might be the serial killer who has been targeting women who look just like her all around the city. When it becomes clear Emma is the killer’s ultimate target, Jake will stop at nothing to keep her safe.

And the best thing about Dangerous Desires is that right now, it’s on sale for only 99 cents!

– He slid his fingers to the handgun at his waist. If he hadn’t been searching her apartment for a killer, it would’ve been an incredibly sexy move.

– It may have been a while since Jake had had sex, but he’d never had sex like that.

– This wasn’t just some fling he was going to be able to shake off once she was out of danger and free to live on her own again.

– “You’re not the first person to make bad decisions because you thought you were in love.” Not that he knew anything about being in love. Bad decisions? Yes. Love? He still had a thing or two to learn about that.”

– He’d told her he couldn’t make her happy. So why had she been so damned happy with him? Why had she felt like she had everything she wanted when she’d believed she could have him?

– He’d put solving the case above Emma’s safety, and he’d sworn he’d never make that mistake again. He deserved every ounce of her anger.

Jake was attracted to Emma when he first met her soon after her fiance’s death, and though she
impressed him with her strength and poise in such a difficult situation, he couldn’t pursue her then, for obvious reasons. He never forgot her, nor did he ever expect to see her again, but acting on his infatuation now could cost him his job and put her life in danger.

Emma is intrigued by Jake’s dangerous career – so far removed from the boring daily grind of her own life. Of course, she noticed the sexy detective when he’d been assigned to her fiance’s case, but his inability to solve that case makes her leery about trusting him on this one. Once he becomes her self-appointed bodyguard, Emma has no choice but to get to know him better, and she sees he wants many of the same things she wants out of life, things she’d just recently gained the courage to go after for herself.

After weeks of an unsuccessful investigation, Jake reluctantly agrees with his lieutenant’s plan to try to lure the killer out. Jake brings Emma to the annual police department fundraiser, a high profile event covered by all the New York news media. Emma enjoys a fairy tale evening, only to realize Jake has used her as bait.

This scene was particularly difficult to write – I felt every bit of Emma’s roller coaster ride of emotions! She has just begun to trust Jake and believe they could have a future together, but now she feels so thoroughly betrayed, she can’t see how things could possibly work between them. It was hard not give up hope myself, even though I know they’d find a way!

His footsteps came up slowly behind her, and he placed his hands on her arms, rubbing them gently. “Emma…” he began, but his voice trailed off.
She turned to face him. “You were trying to lure him out. Bringing me here tonight, showing me off outside. You even had this room reserved, in case you needed to hide me. You were hoping he’d try to get to me. That’s why you put a tracking device on my earring.”
“I had no choice. I could have lost my job—”
“I could have lost my life!”
The color drained from his face, and a rush of air burst from his chest as if she’d punched him in the stomach. Good. He deserved to feel as sick over this as she did.
“I would never have let that happen,” he said, his voice low and tortured. “It was the lieutenant’s plan, not mine. I had orders to follow, but I never would’ve let anything happen to you.”

…because I absolutely loved writing it! Jake and Emma’s story was the first full-length novel I actually FINISHED writing (I started many others over the years, but we won’t go into that…) It took me a while to polish it up and get it published, and I’m so proud of the final result. These characters lived in my heart for so long, it’s a thrill to finally see them out in the world. If you love a forbidden romance with heart-pounding suspense, you’ll love Dangerous Desires. And it’s on sale for only 99 cents!

I’ve got at least two more books in the works for the Killer Instincts series, one of which will feature Jake’s colleague, Officer Adam Markowitz. Also in the pipeline are two more stories in the Romance in Ridgeport series, the first of which was my debut novel, Burn.

Giveaway: One reader from the comment will win a signed paperback copy of Dangerous Desires. US only.

To enter Giveaway: Please complete the Rafflecopter form and Post a comment to this Q: Who are some of your favorite romantic suspense authors?

Three years after Emma Sloane’s wealthy fiancé’s mysterious death, she’s finally ready to move on and pursue her own dreams. But her plans are derailed when she’s attacked outside her New York City apartment in what she thinks is a random violent incident. Then other women who look just like her start turning up dead…

Homicide Detective Jake Quinn is haunted by the one case he couldn’t solve. When he’s put in charge of a new high-profile murder case, he interviews a victim who escaped a similar attack—and to his shock it’s Emma, the former fiancée of his unsolved murder victim.

Neither expects the sparks of attraction between them. But the killer escalates, clearly targeting Emma, and Jake’s job is on the line. Can he solve this case before it’s too late for both of them?
Book Links:  Amazon | B&N | iTunes | kobo | Google |

With an overactive imagination and a slightly twisted mind, Dawn Altieri has been scribbling stories practically since birth. When she’s not curled up on the sofa with her laptop, her latest story, a box of chocolates and a cup of tea (or a glass of wine, depending on the time of day), she can be found volunteering in the world of animal rescue. She shares her home with her husband and daughter, and a menagerie of rescued fur-babies.
Website | Facebook | Twitter | Instagram | GoodReads |