Today it is my pleasure to Welcome author Hazel Prior to HJ!

Hi Hazel  and welcome to HJ! We’re so excited to chat with you about your new release, Ellie and the Harpmaker! 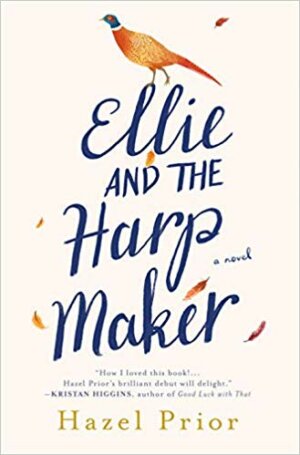 A story set in the wilds of the English countryside, it explores the themes of love, freedom, music and fulfilment. Ellie is a housewife with a dream which she has never quite managed to pursue. But when she meets eccentric harp-maker, Dan, that dream summersaults into reality and sets in motion a stream of unexpected events. Then Ellie unearths an important secret. Her decision to reveal it upends both their lives.

I had the idea for the book from the many people who came up to me at harp performances (I’m a harpist) and declared: “I’ve always wanted to play the harp!”
I wrote the first draft with pen and paper, sitting in a field with my cat beside me.
The cover of the book shows one of the characters: a pheasant named Phineas.

Dan is a charmingly quirky character who counts everything from the steps of his staircase to the mushrooms on his daily walk. He lives in an isolated old Barn on the moor. When he isn’t obsessively making harps he obsessively makes sandwiches. Ellie, on the other hand, has a suppressed creative side. She doesn’t realise how much more she could do with her life.

Dan has an unusual perspective and way of describing things. His voice came to me straight away, but I have no idea where it (or he) came from. I don’t know anybody remotely like him. There’s a strength and directness to him that I was immediately drawn to and I had to find out more. Ellie also surprised me in the way she slowly realises things, gathers strength and evolves throughout the book.

I think I’d use the first scene where they meet because it reveals quite a lot about their characters.

“Do you mind my asking, have you been here long?”
I informed her that I’d been here for one hour and forty-three minutes. Before that I was out in the woods, having my walk. She smiled and said: “No, I mean, have you had this place a long time? As a workshop?”
I told her I came here when I was ten years old and I was now thirty-three years old, so that meant (I explained in case her maths was not very good) that I’d been here for twenty-three years.
“No! I just can’t believe it!” she said again. She seemed to have a problem believing things. She shook her head slowly. “I think I must be in a dream.”
I offered to pinch her.
She laughed. Her laugh was interesting: explosive and a little bit snorty.
The next thing that happened was I went across and shook her hand because that is what you are supposed to do. You are not supposed to do pinching. I knew that really.
“My name is Dan Hollis, the Exmoor harp-maker,” I said.

First, I just want them to enjoy the read. Also I’d like them to see the loveliness of life lived simply and honestly, not dictated by society’s (often distorted) values. Beyond this, if anyone is lacking the courage of their convictions like Ellie, I want them to feel encouraged – to dare to follow their dream, whatever it may be.

I am at the editing stage of my second novel, now, which is due to be published next year.

Giveaway: One giveaway copy of ELLIE AND THE HARPMAKER by Hazel Prior. Winner must have a valid US shipping address.

To enter Giveaway: Please complete the Rafflecopter form and Post a comment to this Q: Have you ever had a chance encounter that changed the course of your life?

Excerpt from Ellie and the Harpmaker:

***This excerpt is from an advance, uncorrected proof***

A rich, heartwarming and completely charming debut that reminds us that sometimes, you don’t find love–love finds you.

Dan Hollis lives a happy, solitary life carving exquisite Celtic harps in his barn in the countryside of the English moors. Here he can be himself, away from social situations that he doesn’t always get right or completely understand.

On the anniversary of her beloved father’s death, Ellie Jacobs takes a walk in the woods and comes across Dan’s barn. She is enchanted by his collection. Dan gives her a harp made of cherrywood to match her cherry socks. He stores it for her, ready for whenever she’d like to take lessons.

Ellie begins visiting Dan almost daily and quickly learns that he isn’t like other people. He makes her sandwiches precisely cut into triangles and repeatedly counts the (seventeen) steps of the wooden staircase to the upstairs practice room. Ellie soon realizes Dan isn’t just different; in many ways, his world is better, and he gives her a fresh perspective on her own life.

Hazel Prior is a harpist based in Exmoor, England. Originally from Oxford, she fell in love with the harp as a student and now performs regularly. She’s had short stories published in literary magazines, and has won numerous writing competitions in the UK. Ellie and The Harpmaker is her first novel and she is working on her second.
Website | Twitter |

24 Responses to “Spotlight & Giveaway: Ellie and the Harpmaker by Hazel Prior”