Today it is my pleasure to Welcome authors Sarah Fischer & Kelsey McKnight to HJ!

Hi Sarah  & Kelsey and welcome to HJ! We’re so excited to chat with you about your new release, Falling in Puppy Love! 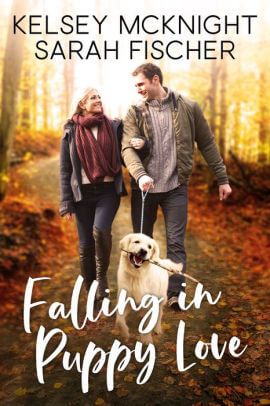 When journalist Aiden is hit with a scandal, he takes a job at his childhood hometown paper. Emily runs a dog rescue and is Aiden’s first interview. He helps her with publicity and she helps him figure out his new dreams. But his old dream comes calling in the form of a big job out of state. Aiden is left deciding between dreams and what he hopes is love.

“Aiden pulled her away from the party, away from the lights, away from the distraction. With just the moon shining and the lights glistening, it was easily one of the most romantic moments of his life. And what struck Aiden was, in any relationship he’d ever been in, he’d had to work for this level of romance. But with Emily everything felt natural. It just fell into place. He was just himself.”

We both grew up with rescue dogs and we wanted to write a book that highlighted the need to, not only rescue dogs, but donate to organizations that run the rescues. Also, we liked this idea of reinventing yourself at around 30. There are so many people who think by then you have to have your entire life figured out. What happens if you don’t fit that mold? Can you still find a successful career? Have a family? Yes!

We have recently started making “online dating profiles” as a way to get to know our characters. Emily is a huge movie buff but she has all the dogs to look after and not a lot of help. As a result, she has a killer movie collection with surround sound and a 4k flat screen. Her profile has must love movies on it. Aiden was a bit harder for us because he had the most growth. He decided the end of the book before we quite knew where it was going to go. I’d say that was a pretty big surprise for us!

Our favorite scene is the formal gala Emily hosts as a fundraiser for her rescue. There aren’t a lot of opportunities to get out a floor length dress outside of being a bridesmaid so we loved giving her this scene to get out of the fur covered clothes and into something beautiful. The quote mentioned above is from that scene. Aiden takes her away from dancing under the stars to a crooner, away from the romantic lighting, and far from the crowd to talk. This scene is one of our favorites because the romance happens without all of the added things. It’s just the two of them alone in a field. You don’t always need grand gestures for romance…but they’re still fun.

The most difficult scene was when Aiden gets the call about the job offer and tells Emily. We love our characters and this scene crushes Emily. She previously had a boyfriend who left her simply because he didn’t want to live in the small town forever. Now, it was happening all over again.

“Emily held her breath, waiting for some kind of response. Maybe he’d tell her no straight off. Maybe he’d tell her yes right away. If he went to Chicago, she knew it meant they weren’t destined to be together. But before he made a decision, he needed to know all the facts. But now at least he’d have the choice. He’d know how she felt. “Emily, I haven’t gotten the offer from them yet.” His voice was soft, and it wasn’t an answer, but it was something. “You will. And then you’ll have a decision to make. I just want you to have all the facts before you make that decision. So please, until you’re sure, don’t say anything at all.”

We hope people realize that it’s perfectly acceptable to take some time to figure out what you want out of life. Life is too short to do something you hate. We also hope people will look into dog rescues near them. They could use volunteers or donations or even homes for a new family member.

Together, we have another sweet romance coming out in January 2021. It’s a Valentine’s romance that takes place at the Hazel Oaks Resort. It’s a deluxe resort in upstate New York. We’re hoping to make it a trilogy that follows different members of the staff as they find, or are forced into, love. Kelsey has a book called To Wrangle a Rancher out in February 2021. It’s a romantic comedy set in Montana.

Giveaway: An ebook copy of Falling in Puppy Love & 3 Tule ebooks of your choice

To enter Giveaway: Please complete the Rafflecopter form and Post a comment to this Q: What is it about a character that makes you fall in love with them?

Excerpt from Falling in Puppy Love:

He’s used to stories with no happy ending…

Aiden Hughes never expected to return to Birdsong, but after a scandal rocked his professional world the former hard-hitting reporter needs a plan B. Covering local events for the small town newspaper after chasing down national news is a huge step backwards. But when he interviews the founder of a dog rescue whose heart is bigger than New York City, he wonders if there’s more to life than his byline in a prestigious paper.

Emily McLane has always had a sweet spot for animals. She plans an ambitious adoption festival to fund the expansion of her beloved dog rescue, but she needs publicity. When a former local boy offers to help her design a promotion, she finds herself falling in love for the first time.

They both have big dreams, but Aiden’s will take him far from Birdsong. Will they follow their hearts or are they only falling in puppy love?

Sarah Fischer
Sarah Fischer works hard fighting the good fight in personnel security. She graduated with a degree in criminal justice and married the calm to her crazy. Then Sarah had a health scare and needed heart surgery. While recovering, she finally had the time to write the stories playing out in her mind. Her college romantic suspense series, Elton Hall Chronicles, is now available in its entireity on Amazon. First Semester, Second Snowfall, and Third Wheel remind you what you loved about college, show you what you missed, and make you yearn for what could have been. Sarah also has a contemporary short story in the Craving Bad anthology. In her spare time, you’ll find her with a book in her hand, at the movies, or watching just one more episode of reality tv.

Kelsey McKnight
From Scottish lairds to billionaire businessmen, Kelsey McKnight will ignite your soul, no matter what century it lives in.

Kelsey is a university-educated historian from southern New Jersey. She has married her great loves of romance, history, and literature to create her own tales of dashing heroes, sultry bad boys, and lovable heroines who have their own stories to tell. They will take you through the ballrooms of Victorian London, the hills of the Scottish Highlands, New York City penthouses, and into small towns with big hearts, all at the flip of a page.

When she’s not writing, Kelsey can be found reading, drinking too much coffee, spending time with her family, and working for a nonprofit organization.
Website |  Instagram |

« REVIEW: In Case You Missed it by Lindsey Kelk
Spotlight & Giveaway: Once Forbidden, Twice Tempted by Karen Booth »