Today it is my pleasure to Welcome author Juanita Kees to HJ!

Hi Juanita and welcome to HJ! We’re so excited to chat with you about your new release, Fast Lane! 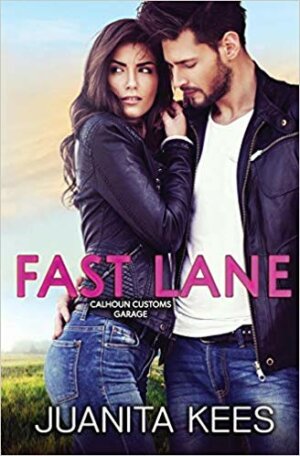 Fast Lane is the story of youngest Calhoun sibling, Trinity, a NASCAR racing driver who comes home to be with her family when her father is diagnosed with Parkinson’s Disease. She meets hero, Reece Balmain, a man broken by the loss of his foster siblings in a car accident, and raising his godson, Tyler, alone. They have many challenges (and a few fun, cheeky dares) to overcome to find their happy-ever-after. Fast Lane is a story of love, hope, trust, faith and a family bond so strong you’ll wish the Calhouns were real.

Trinity rolled her shoulders, eased the stiffness in her neck, and stretched her spine against the restraint of the body harness. Gloved hands tight on the wheel, legs braced, she lined up in fifth position behind the pace car and brushed aside the nagging feeling in the pit of her stomach. Pre-race nerves mixed with adrenaline.

Trinity is a strong, feisty character. She is lively and energetic. But behind that energy is a deep sense of sadness and loss too. Reece is more grounded, a little more serious, but with a big heart and a smile I hope will win readers’ hearts.
What surprised me most about Trinity was how hard it was to pin her personality in a way I could portray to readers. If you’ve seen The Sound of Music and heard the song “How do you solve a problem like Maria?”…well, that’s Trinity. “How do you keep a wave upon the sand? How do you hold a moonbeam in your hand?” (Rogers and Hammerstein)

Oh! Chris Hemsworth for Reece, yes please! And maybe Megan Fox or Mila Kunis as Trinity. Chris Hemsworth has a wicked chuckle and I can so see him playing the part of a rescue hero.

A drumbeat made her eyes water and her teeth hurt. Stark white light pierced her pupils as gentle fingers lifted her eyelids. She hissed out a breath at the pain that stabbed at her head.
“Trinity, can you hear me?” A male voice. Not Mitch. “Can you tell me where it hurts?”
“Everywhere.”
A chuckle. Deep with cynical ring to the tone. “That’s what happens when you slam into barriers at two hundred miles an hour. Lucky for you the safety gear did what it’s designed to do. Open your eyes for me.”
She cracked one open, the other refused to follow. He’d opened her visor. “Are you an angel?”
That chuckle again. More humor in it this time. “Honey, I’ve been called a lot of things in life. An angel isn’t one of them.”

That family is everything and love can overcome any hurdle life throws in the way.

I’m currently working on book 3, Burnout. Out of all the Calhouns, Mason is the one I’m most excited about. He has a really tough time in the over-arching plot in the series, and giving him his well-earned happy-ever-after gave me the most pleasure of all the Calhoun clan.

To enter Giveaway: Please complete the Rafflecopter form and Post a comment to this Q: If you had to give up one thing in life that you love because it stands between you and the person you’ve fallen in love with, what would it be and why? (Not a sacrifice but a compromise.)

Trinity Calhoun is a name everyone knows on the race circuit, but her days in the hot seat are numbered. She’s tired of the limelight, meaningless relationships and long hours behind the wheel. When her father calls her and her sister home, she’s ready. She slips right back into the family business, finishing off the custom car projects her father has lined up. But racing is in her blood and she’s lured back to risking her life on the hot rod drag strips outside of town. It’s there she meets paramedic and volunteer firefighter, Reece Balmain, who has her re-thinking the road her life is taking.

Reece Balmain arrives in Big Fork a broken man. He’s lived and breathed through horror accidents, haunted by the faces of the people he’s cut from vehicles. He knows one thing–speed kills. He’s hoping not to see too much of it in small town Montana, until he hears about the drag races taking place outside of town. He knows Trinity Calhoun. He’s watched her race, seen her win, held his breath when her car somersaulted into barriers in Daytona Beach. He doesn’t like what she does, but he can’t stay away from the woman who’s claiming his heart.

Juanita graduated from the Australian College QED, Bondi with a diploma in Proofreading, Editing and Publishing, and achieved her dream of becoming a published author in 2012 with the release of her debut romantic suspense, Fly Away Peta (recently re-released as Under Shadow of Doubt).

Under the Hood followed in 2013 as one of the first releases from Harlequin’s digital pioneer, Escape Publishing.

In 2014 Juanita was nominated for the Lynn Wilding (Romance Writers of Australia) Volunteer Award, and was a finalist in the Romance Writers Australia Romantic Book of the Year and the Australian Romance Readers Awards in 2014 and 2016. Her small-town romances have made the Amazon bestseller and top 100 lists. Juanita writes mostly contemporary and rural romantic suspense but also likes to dabble in the ponds of Paranormal with Greek gods brought to life in the 21st century.

She escapes the real world to write stories starring spirited heroines who give the hero a run for his money before giving in. When she’s not writing, Juanita is mother to three boys and a Daschund named Sam, and has a passion for fast cars and country living.
Website | Facebook | Twitter | Instagram | GoodReads |