Today it is my pleasure to Welcome author Charish Reid to HJ!

Hi Charish and welcome to HJ! We’re so excited to chat with you about your new release, Hearts on Hold! 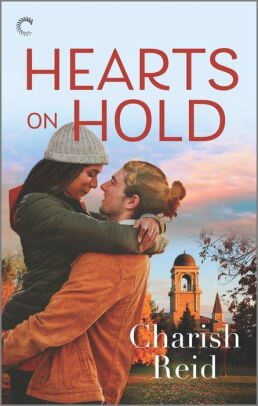 I wanted to do a few things with Hearts on Hold. First, I wanted to write about a black female professor, Victoria Reese, trying to do her best in a predominantly white university. The experience can be fraught with a lot of stress, but there are also joyful moments. I wanted to find that balance in one novel. I also wanted to try my hand at a few tropes: Workplace Romance and Opposites Attract. That’s where John Donovan, the hunky local librarian, comes in. He’s the laidback, loosy-goosy to Victoria’s tightly-wound. For him, the work that they need to do together will eventually get done. For Victoria, their project represents another thing that she cannot fail at. Lastly, I wanted to write about two mature adults who are still sorting out how relationships work. These two are in their thirties, already in their respective careers, but they still have stuff to learn about themselves and each other.

“Victoria did what she was good at; she held her tongue. The mask that she was accustomed to wearing settled over her face, covering any emotions that could betray her.”

“I don’t usually engage in sordid affairs,” he whispered. “But I’m painfully curious about a well-organized, extremely professional woman who’s so buttoned-up that she might pass out from suffocation.” So he can hear my labored breathing. “I want to know why she’s in love with a rakish duke. He is a rake, right?”

John Donovan didn’t start off with ADD, but as I continued to shape him through drafts, I realized that was coming out. It shouldn’t have been surprising that some of my neurological issues would crop up in his character, but it was really relieving when he finally took shape. Victoria Reese was easy to build because, after years of talking to my fellow professor girlfriends, we’ve all come up with a million teaching stories to bond over.

The tongue-lashing Dr. Reese gives her student after class was difficult. I’ve actually heard and then repeated iterations of her lecture as a young person and a professor. And while it was important to put it on paper, it still felt rough to sit with the words. There’s truth in what she says to her student, but she wonders if she should have been so honest.

There’s understanding rhetorical situations, and then there’s pleasing people without question. You can’t always “be on” and perform for every single person you meet. If you keep juggling all of these separate personalities, you will lose yourself in the acting.

I’m working on a jewelry heist! It’s an enemies to lovers, pulling off one last score, romance.

To enter Giveaway: Please complete the Rafflecopter form and Post a comment to this Q: What was the title of your last overdue library book?

Excerpt from Hearts on Hold:

When he’d created another pile of papers he smoothed down his shirt and reassessed the situation. She wasn’t asking for him to seduce her. Apparently, they were past that point, which was flattering. She was demanding that he compartmentalize his feelings for four weeks and then abruptly end an “affair.” They could skip the formalities of courtship, have illicit meet-ups, and go their separate ways. Someone like his friend, Chris, would jump at the chance to have a fuck-buddy like Victoria. A smart, sexy woman, who just wanted him for his body? It could be an entertaining proposition. “Do you have any more terms?”
Victoria nibbled her bottom lip before answering. “In our allotted time together, I’m up for almost anything,”
John almost did a double take. Just so there isn’t any confusion… “Please expand.”
“Do I have to?”
John leaned forward, resting his elbows on his desk. “While you were plotting out our schedule, you didn’t bother to think about your desires?”
“I was hoping you’d surprise me?” She gave a nervous cough as she shifted in her seat and crossed her legs.
He shook his head. “So you want a structured, well-planned passionate affair? Is this oxymoron more or less what the duke would agree to?”
She appeared to think about it. “The duke had some questionable ideas regarding consent that I think we should avoid.”
“I imagine that goes with the time period.”
“Right.”
“And what else?”
Her face reddened again.
“I can’t agree to what I don’t have full understanding of, Dr. Reese,” John said. He found himself already enamored by her demure demeanor. It appeared almost anything could make her blush. He wondered what brushing his fingers along the inside of her thigh would do. “Tell me what’s on your lists of wants.”
She appeared to think about it. “Alright…I’ve never done it in a public place. I wouldn’t mind that.”
“Noted.” He was already plotting.
“I’ve never done phone stuff either.”
John licked his lips. “You mean phone sex?”
Victoria nodded.
“Nor have I,” he admitted, his eyes darting to her lips. “But I now find myself motivated to try it.”
“I’m not a fan of anything too rough,” she said a stronger voice. “Like choking or spanking.”
John felt his own face redden. “Got it,” he said with a cough. “So a softer approach then?”
“But not too soft,” she added quickly.
Her list was making him a little hot under the collar. Beneath his desk, he adjusted his jeans and gave another cough. “Right, not too soft,” he repeated in a husky whisper. “Anything else?”
“I prefer condoms, but I am on the pill…” she paused, “…so, if one of us forgets while we’re, you know, in a public place or whatever, it won’t be a crisis.”
That was also good to know. “That can be arranged,” he said with a decisive nod. “That it?”
“Yep.”
“Okay.”
She flashed him a bright smile. “So, you’ll do it?”
John paused, making a little pros and cons list of his own.
Cons: Victoria was intense, a tight ball of nerves, and a taskmistress whose withering looks could shrink the balls of a lesser man. Following her schedule would probably cause him more stress than he needed.
Pros: He liked the idea of coaxing that tight ball of nerves into a more relaxed state. She was a gorgeous Pembroke girl whose withering looks certainly turned him on. And, upon closer observation, her sex schedule managed to work around his own.
Lastly, with all this talk about release, John felt like he was deserving of that as well. He wanted a little freedom from his many responsibilities at the library. And as much as he loved her, John would soon need a break from Becca. “Lay out those terms one more time?”
Victoria rolled her eyes with a sigh. “Three weeks of rigidly scheduled passion.”
“One week,” he corrected. “Of rigidly scheduled passion. The following week, we’ll do it my way.”
“Wait—”
“I assure you, it will be just as fun as your plan.”
“Deal,” she said in a resigned tone.
“Good,” he said with a quick nod. He wasn’t positive that this was a good plan, but he did appreciate an interesting challenge. Though he couldn’t put his finger on it, there was something about Victoria that made him sit up and take intense interest. She was captivating, witty, gorgeous, and not someone who he could keep his mind off of. Sure, he’d follow her arbitrary timeframe, but he was now dedicated to keeping things interesting. After all, she was down to have fun in public. “When do I start?”
“Tomorrow at one,” she said with a grin. “I’ll email the spreadsheet to you using my personal email account. We’ll have to do all Sordid Affair-related emails on personal accounts.”
She’s thought of everything. “And tonight we’ll just continue working like this isn’t a thing?”
“Exactly.”
John stood and moved around his desk towards her. “In that case, come join me in the Children’s Department so I can read Halloween books to the kids.”
Her mouth fell open. “Now?”
He leaned down and took her by the chin. “It’s in the job description, Dr. Reese. Or did you forget why we were meeting tonight?”

Professor Victoria Reese knows an uphill battle when she sees one. Convincing her narrow-minded colleagues at the elite Pembroke University to back a partnership with the local library is a fight she saw coming and already has a plan for. What she didn’t see coming? The wildly hot librarian who makes it clear books aren’t the only thing he’d like to handle.

When a tightly wound, sexy-as-hell professor proposes a partnership between his library and her university, children’s department head John Donovan is all for it. He knows his tattoos and easygoing attitude aren’t quite what she expected, but the unmistakable heat between them is difficult to resist.

And then there’s the intriguing late fee on her record. For the Duke’s Convenience… A late fee and a sexy romance novel? There’s more to Dr. Reese than she’s letting on.

John might like to tease her about her late fee, but when he teases her in other ways, Victoria is helpless to resist. Mixing business with pleasure—and oh, it is pleasure—always comes with risks, but maybe a little casual fun between the sheets is just what Victoria needs.

Charish Reid is a fan of sexy books and disaster films. When she’s not grading papers or prepping lessons for college freshmen, she enjoys writing romances that celebrate quirky black women who deserve HEAs. Charish currently lives in Sweden, with her husband, avoiding most forms of exercise.
Website | Facebook | Twitter | Instagram | GoodReads |

« Spotlight & Giveaway: Selected by Barb Han
REVIEW: Always the One by Tara Randel »

15 Responses to “Spotlight & Giveaway: Hearts on Hold by Charish Reid”