Today it is my pleasure to Welcome romance author Joanne Rock to HJ!

Hi Joanne and welcome to HJ! We’re so excited to chat with you about your new release, Her Texas Renegade!

Hello! I’m glad to be here to talk about books! I know many of us are reading more than ever lately. 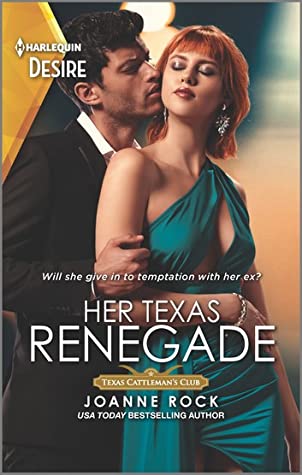 A divorced heiress must set her ex-husband’s estate to rest, but she needs the help of a sexy cybersecurity expert who walked away from her long ago.

Miranda Dupree Blackwood took deep breaths before the meeting with her ex-stepchildren where they would learn the contents of Buckley Blackwood’s last will and testament. Miranda had flown from her home in New York City to Royal, Texas, because of Buck’s highly unorthodox last wishes. Knowing what her wily ex-husband had planned for today made her ill, but she understood the role he wanted her to play, and she wasn’t going to turn her back on it.

This is a second chance romance, so we don’t get to see the *very* first thing that attracted these two… their affair is long in the past. But I do reference it, and they were attracted by their equal commitment to pursue their dreams/ambitions.

“As temporarily satisfying as it might be to indulge ourselves, Kai, I think we have too much painful and complicated history for any good to come from falling into old patterns. We can’t just pretend the hurtful parts didn’t happen.”
Had it been hurtful for her, too?
Her expression seemed to confirm it, but at the time, he’d viewed their breakup as one-sided. She’d moved on without him, turning her affections toward someone more successful. He’d thought he’d been doing her a favor by giving her up. The idea that there might have been more to it gnawed at him.
“You think renewing our affair is too risky.” He summarized her point, winnowing it down to the bottom line. He paced away from her as he thought it over, his gaze shifting to the silent spill of water at the edge of the infinity pool on the patio.
“Yes.” She sounded relieved that he seemed to understand.
But a good negotiator always had a backup plan.
“I disagree.” He strode toward her again, liking the vision of her here, in his home. “We’re both older and wiser. We wouldn’t fall prey to the false illusions we had about one another ten years ago.”
He stopped just short of her, his chest so close to her he could feel the heat radiating off her, the heat of their desire for each other. Except she looked ready to argue again.
“What about a compromise?” he suggested, before she could speak, still not touching her even though the ache for her was a tangible thing inside him.
She arched an auburn brow, questioning.
“One last kiss,” he suggested, presenting his real agenda.
For now.
“I think that’s a bad idea,” she said quickly, reaching for her water glass again. She took a sip, then kept the cut crystal in one hand, a barrier between them.
Her lips glistened with moisture. His heart slugged faster.
“Is it?” He leaned closer, but didn’t touch her. “Let me tell you why I think it’s the best idea.”
“Um.” She shifted, her knee grazing his as she moved.
The brief feel of her stoked a fire inside him, but still he didn’t touch her, needing her to make the decision. “It would let us end on a good note. Give closure to that chapter.”
She set her glass on the counter, the tumbler clinking unsteadily on the granite. “I don’t think so. And I’m not sure this is a fair discussion.”
“Good debate calls for supporting arguments.” He eased back enough to look into her eyes, a far deeper blue than the pool outside. “But if you’re not interested in hearing how a kiss might clear away the thoughts that cloud my head when you’re around—”
She closed her eyes for a moment, and he thought she was trying to shut down the conversation. But then she nodded. It was a gesture so slight it was almost imperceptible, but he’d seen it. Somehow that nod told him she was conceding the point. His pulse sped.
“If we’re going to do this, make it count.” Deliberately, she curved a palm around his neck and lowered his mouth toward hers.
She began by brushing her lips over his with a feather softness that made him groan.
Or maybe it was the feel of her luscious curves pressing into him that tore the sound from his throat. Either way, the sweet satisfaction of her hands on him, urgently gripping his shirtfront to draw him closer, was the best possible outcome.
Her lips parted, welcoming him, and he took his time savoring her, licking his way inside. He lingered in the places that made her breath hitch, remembering what she liked, reminding her what they could do to one another. He wrapped her in his arms, sealing her to him, positive no man could make her feel the way he could. The orange-jasmine scent of her skin fired through his senses while her fingers skimmed over his shoulders and down his back.
He tried telling himself it was just a kiss. That he couldn’t take any more than that. But the soft swell of her breasts against his chest, the shift of her hips muddled his thoughts. Her hips rocked, seeking, and he was lost.
The kiss went wild. Out of control. The needy sound she made in the back of her throat undid him. Her hands slid over his shirt and then her fingers made quick work of the buttons. She slipped one hand along the heated flesh of his bare chest, her nails lightly scoring. He forced himself back, knowing he needed to end this. Remembering she hadn’t signed on for more than a kiss.

I liked this scene set at a community center the hero built in his hometown. It lets us see what he’s done with his life since he first met the heroine long ago…

The hero and heroine first cross paths in this scene, and I think it is a good one to show the way they challenge each other-

For the sizzle and drama! Harlequin Desires offer lots of both, and I think the Texas Cattleman’s Club stories really highlight the soap-opera feel of stories that showcase the lives of the wealthy and powerful.

I’m starting a new series for Desire tentatively called Brooklyn Nights with heroines trying to get their start in the competitive worlds of fashion, makeup and theater in New York City. My next releases will be in January and February of 2021 when my Mesa Falls series wraps up with The Rancher and The Heir.

To enter Giveaway: Please complete the Rafflecopter form and Post a comment to this Q: Kai Maddox, the hero of Her Texas Renegade, rides a motorcycle. If you had to choose between a ride on a motorcycle or a horse, which would you choose?

Excerpt from Her Texas Renegade:

Mixing business and pleasure with a former flame, she’s bound to get burned…

Wealthy widow and business owner Miranda Dupree needs a security expert, and her ex, bad-boy-hacker-turned-security-magnate, Kai Maddox, is perfect for the job. But can they keep their steamy, tumultuous romance in the past when the renegade billionaire is so darned tempting? Miranda can’t help herself, and soon an innocent business proposition leads to a replay of passion beyond their control…
Book Links: Amazon | B&N | iTunes | Goodreads |

Joanne Rock is a USA Today bestselling author. She’s written over one hundred books, most recently focusing on sexy contemporaries and small-town family sagas. She enjoys romance for prioritizing relationships and encouraging readers to follow their dreams. A frequent speaker at regional and national writing conferences she enjoys giving back to the writing community that nurtured and inspired her early career. She has a Masters degree in Literature from the University of Louisville. When she’s not writing, Joanne enjoys travel to gather new ideas.
Website | Facebook | Twitter | Instagram |

« REVIEW: Sure Shot by Sarina Bowen
Spotlight & Giveaway: Every Little Piece of Me by Lexi Ryan »

44 Responses to “Spotlight & Giveaway: Her Texas Renegade by Joanne Rock”