Today it is my pleasure to Welcome author Lucy Monroe to HJ!

Hi Lucy and welcome to HJ! We’re so excited to chat with you about your new release, His Majesty’s Hidden Heir!

Hi! It’s so great to be back on HJ. Thanks for having me! 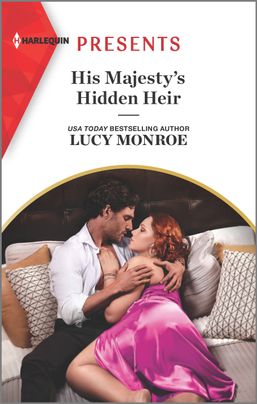 Prince Konstantin had to let go of the only woman who ever really mattered because of a business marriage contract he signed for the sake of his royal family and their country. Now, the contract has been nullified and he’s finally found her again. Only, he’s shocked to discover Emma has a son who looks just like him.

Emma despises what Kon did to her, but she believes her son deserves to know his dad. And the prince isn’t all bad, even if she’ll never trust him again.

Can Konstantin build a relationship with his child and woo the woman whose love he betrayed for the sake of duty?

She stomped back into the living room and threw the court papers at him. “No restraining order? Then what is that? A bedtime story?”

When I started writing this book, a friend of mine learned that most of it was set in Santa Fe, New Mexico. She’d lived there herself and still craved the chiles that are grown locally. Of course, loving chile peppers myself, I had to go on the hunt for them to see if maybe they were exported. And I found a jar of them at Costco of all places. Yes, they are delicious and they make for some very yummy dishes. I always do a lot of research when I’m writing, but I hadn’t expected that research to include cooking!

Kon is attracted Emma because she’s so forthright and certain of what she wants to do. Emma really enjoys the prince’s sense of romance and it’s easy, later for her to mistake that for something it isn’t. Or at least they are both convinced it isn’t … because for him, love simply cannot hold sway in his life. Their sexual chemistry is through the roof, but they really enjoy each other’s company and that gives them a place to start rebuilding later. When sex is so far off the table as far as Emma is concerned, it might as well be sitting in a timeout on another continent.

This scene was really emotional for me, but it also made me laugh a little. Emma is having a well deserved meltdown, as she realizes what her own fears have cost her son. But Kon’s reaction to her feeling guilty for *not* dating was kind of priceless too.

Emma had her own burden of guilt she was just coming face-to-face with. “I could have built a family for him. Mrs. Jensen wanted to be my friend but I wouldn’t even call her by her first name. It was Claire. I never used it. Not once. She needed a friend too.”
But Emma had been too raw with loss to make friends with her employer. Later, she’d built walls around her heart she hadn’t even realized were there.
“Because the people you had trusted with your heart crushed it.” Kon’s expression was as if light had dawned over the horizon to illuminate and turn dark, impenetrable shapes into something recognizable. “Your parents, me… We let you down so badly you didn’t trust anyone else.”
“And hurt my son in the process.” She gulped in air, trying to control the tears. “I thought I’d got it together. That I hadn’t let myself become that cynical, broken soul. But all the time I was so proud of my inner peace, I was that woman and I kept everyone who could have given Mickey a sense of security at a distance.”
“Mishka had you. He was safe. He was loved.”
“But he was worried!” She pressed her fist against Kon’s chest. “I should have dated Mr. Leeds. Mickey adores him.”
“No, he’s not the right man for you,” Kon slotted in with speed.

Because even though you’ve got a billionaire prince with a son he’s never met, both Kon and Emma’s emotions are so relatable. It’s the kind of romance I love to read and so far, early reviews are saying readers feel the same. It’s about two people you can’t help caring about and their truly adorable son.

I’m currently working on the next book in my PNR series, Children of the Moon. DESERT MOON is set in Regency Era Egypt and it’s got archeology, shape changers and references to Ancient Egypt.

My next release is the third book in the Princess by Royal Decree miniseries, THE COST OF THEIR ROYAL FLING (Feb 22, 2022 Harlequin Presents), unless I bring out DESERT MOON first.

To enter Giveaway: Please complete the Rafflecopter form and Post a comment to this Q: Although I am known for doing a lot of international travel, Santa Fe is one of the cities I’ve always wanted to visit. Because of limits on travel had to cancel my research trip there for this book. However, I plan to go when I can. Where’s someplace people might not expect you would want to visit, but you do?

Excerpt from His Majesty’s Hidden Heir:

The prince is in for a shocking revelation in this secret baby romance by USA TODAY bestselling author Lucy Monroe!

The mother of his child…

…and wearing his crown?

Prince Konstantin can’t forget Emma Carmichael, who vanished after a wedding contract forced him to end their relationship. A surprise meeting five years later shocks Konstantin—Emma has a son. Unmistakably his son.

Emma wants Konstantin in their son’s life—yet she’s wary. She’d had no choice but to walk away; his family hadn’t deemed her worthy of being his princess. But as their reunion stokes the flames of their passion, can she trust that this time their bond is strong enough to prove them all wrong?
Book Links:  Amazon | B&N | iTunes | kobo | Google |

With more than 8 million copies of her books in print worldwide, award winning and USA Today bestseller Lucy Monroe has published over 75 books and had her stories translated for sale all over the world. While she writes multiple subgenres of romance, all of her books are sexy, deeply emotional and adhere to the concept that love will conquer all. A passionate devotee of romance, she adores sharing her love for the genre with her readers.
Website | Facebook | Twitter | Instagram | GoodReads |

« REVIEW: A Certain Appeal by Vanessa King
REVIEW: Just for the Holidays by Adriana Herrera »