Hi Joss and welcome to HJ! We’re so excited to chat with you about your new release, Homecoming Heartbreaker!

Hello! Hope you all are well. 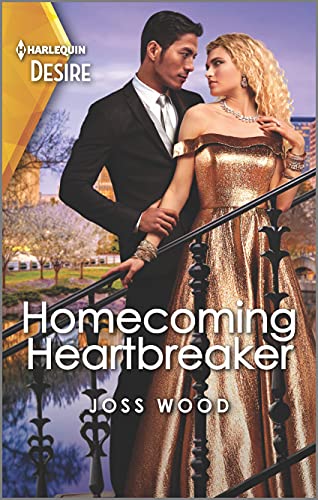 The Moonlight Ridge series is a trilogy I wrote with Karen Booth and Reese Ryan where, at a luxe mountain resort, three estranged brothers find redemption, family & love.
In Homecoming Heartbreaker, MacK Holloway returns to help his sickly adopted father to run the resort, managed by his first love and once best friend, Molly Haskell.

Mack left Molly, and Moonlight Ridge, without a word and she still doesn’t know why he vanished from her life. And Mack’s not ready to explain either. But Molly has secrets of her own she’s trying to keep.

“Let me just say this, Mack and then, hopefully, we can move on. I missed my boyfriend, but God, I mourned my best friend. And you will never, ever get the chance to hurt me like that again.”

Molly and Mack have been friends since they were very young children and, for Molly, Mack and his father provided her with the emotional stability she never received from her parents.
For Mack, Molly was always his best friend but in their late teens they fell in love. But after
an accident, Mack leaves Moonlight Ridge, leaving Molly and his family behind without a word of explanation and, in doing so, breaks her heart.

I laughed my way through the scenes with Jameson and the nurse Mack hires to look after him. Giada takes no nonsense from Jameson!

Giada frowned. Her dark eyebrows pulled together and Jameson knew that she was about to deliver another lecture in her slightly accented voice, her fabulous eyes flashing with impatience. God, the woman was bossy. He rather liked it.
He’d always, terribly inconveniently liked her. And lusted after her.
“You’re reading the news,” Giada complained.
Something he’d done since he was a kid. “It’s called staying informed.”
“It’s stressful,” Giada shot back. “Politics, corruption, more politics, a gruesome murder.”
Jameson tipped his head back and closed his eyes. “I do not need to be wrapped in cotton wool, woman. And give me back my cigars,” he grumbled. Giada thought she was so clever in confiscating his cigars but she didn’t know that he had secret stashes all over the house.
The fact that he had to resort to sneaking around to take a puff pissed him off.
Giada placed the newspaper on the side table next to him and slapped her hands on her hips. Round hips, sturdy hips…hips that could handle his broad hands on them, a body that could handle his bulk and strength, as he pushed into her.
Jameson wiped his hands over his face at the image of a naked Giada under him. There was only one thing worse than fantasizing about a woman he couldn’t have and that was knowing it would be months before he could even try.
God, he was done with feeling like crap.
“What are you thinking about?” Giada demanded, her eyes drilling into him.
He’d never admit the truth so he gestured to M&M. He lowered his voice to make sure that they didn’t hear him; if they did, being stubborn fools, they’d do everything in their power to prove him wrong.
“They are perfect for each other. I am so glad he’s home. She needs him and he desperately needs her.”
Giada put herself between Jameson and his children. Because Molly was, in every way that counted, his. She lifted a finger and poked him in the chest, sending ribbons of electricity skating over his skin. “Do not interfere. They are adults and are perfectly capable of making their own choices and decisions.”
Sure, but where was the fun in that? “I have no problem nudging them,” Jameson replied.
“No nudging,” Giada warned as Molly and Mack called out their greetings. As they approached, Giada sent him a victorious smile and turned to face his visitors.
Before he could greet his son and the woman he hoped would one day be his daughter-in-law, Giada spoke again. “I’m so glad you are here. I need help.”
Molly bent down to kiss his cheek and when she stood up, she kept a hand on his shoulder. She looked at Giada and nodded. “What do you need? What can I do?”
Giada handed him a smile that stopped his heart. It was sexy and sneaky. And savage. “You can help me search the house for Jameson’s contraband cigars.”
Shee-it. Busted.

Because it’s a fun reunion, second chance romance that is the start of a series brimming with humor, love of family and a lot of heat!

I’m currently working on the first in a new series for Harlequin Presents about an owner of a wedding dress salon who falls in love with her best friend’s brother.

In October, the final book in South Africa’s Scandalous Billionaires series will be released– How To Tempt the Off Limits Billionaire– and it’s Ro and Muzi’s story. In November I have a Texas Cattleman’s Club (Harlequin Desire) out, called How To Handle a Heartbreaker.

And in January there’s a spin-off book of SA’s Scandalous Billionaires series, called The Rules of Their Red Hot Reunion from Harlequin Presents.

Giveaway: I’m giving away five (5) ebook copies of Homecoming Heartbreaker. (I’d love to send paperback copies but I’m on the other side of the world and delivery is an issue!)

To enter Giveaway: Please complete the Rafflecopter form and Post a comment to this Q: I wrote this series with Reese Ryan and Karen Booth. Are you a fan of multi-author series or do you prefer the series to be from one author only?

“Hello, Molly.”
God, even his voice was deeper, sexier, like well-aged red wine.
Molly inclined her head and didn’t move from her position, annoyed to realize that her knees were now, and suddenly, the consistency of JELL-O. “Mack.”
Mack placed his hands in the pockets of his pants—black, designer—and walked around the hood of his car to stand at the bottom of the steps. He looked up at her, his eyes shuttered. “I’m on my way to see Jameson…anything I should know before I head over there?”
Molly understood his asking; he knew she and Jameson were tight. Molly lifted one shoulder. “He’s irascible and demanding. He fired another nurse this morning.”
Frustration flickered across Mack’s face. “That’s how many now?”
“Nurses? One this week. Two last week. ”.”
Mack pushed a broad hand through his slightly wavy hair. “He needs a nurse, Molly. He can’t be on his own.”
Molly heard the accusation in his voice and bristled. “Hey, I’m trying to run the resort as well as keep an eye on him. There’s only so much I can do but I did persuade his current nurse to stick around until you arrived today. He needs to accept help or, better yet, you find someone to nurse him who won’t buckle when he yells.”
“He doesn’t mean it. He’s just frustrated.”
Molly scowled at him, annoyed that he was lecturing her about the man whom she’d known and adored all her life and worked with since she left college. The man she’d, sadly, betrayed a few months after Mack left Moonlight Ridge and Asheville.
Don’t think about that now, Molly.
Irritated that she’d let him get to her, she forced herself to smile. “Did you have a good trip?” she asked, her tone completely, to her ears at least, false.
“Do you really care?”
Not a whit, she thought, keeping her smile in place. His eyes narrowed as he tipped his head back to look up, taking in the three-story stone building, covered in thick ropes of ivy. Like her, he’d grown up in shadow of this stone-and-wood building. He in Jameson’s house a short distance away, she, until she was thirteen, in the manager’s house situated beyond the orchard at the back of the property.
A picture of a young Mack, maybe eight or nine, looking up at the mansion in the same way—bemused and impressed, as if he was wondering what he was doing here—flashed on her brain’s big screen. She’d often seen it on his face over the years, as if he still couldn’t believe he got to call Moonlight Ridge home.
“Are you moving into Jameson’s house?” she asked Mack.
Mack looked like he swallowed a sour lemon. “Since he doesn’t have a nurse, I suppose I, temporarily, have to.”
Molly narrowed her eyes at him. When they were kids, Mack had hung on Jameson’s every word, and Jameson hadn’t been shy to tell, and show, them how much he loved his sons. He’d been tough but fair. As one of Jameson’s longest employees—she’d worked for him temporarily since she was fourteen years old and permanently since she was twenty-two—she’d seen how the feud among the brothers impacted her boss. Jameson managed to still be the consummate host, the charming innkeeper, but Molly saw him in his unguarded moments, and his sadness had been tangible.
And, okay, she was being a bit fanciful here, but Molly was convinced that Jameson’s moods affected the inn. When Jameson felt upbeat and buoyant the mansion seemed to glow, its windows, always clean, sparkled and the ivy danced. It seemed to shimmer, radiating his vivacity. When Jameson felt despondent or angry, the inn seemed to shrink in on itself, the stones seemed colder and the wooden frames, and doors, appeared dull.
To Molly, the inn was another character, the mad, rich, adored geriatric aunt everyone ran circles around. Well, she and Jameson did; the three Holloway boys left them behind a long time ago. Like Jameson, she didn’t want to live anywhere else but here. One day, when Jameson heard what she’d done, she would have to leave, but today wasn’t that day.
“A nurse I am not,” Mack said, yanking Molly back to their conversation, “but spending some time together will give us a chance to catch up .”

Molly gestured to the ornate doors behind her. “I need to get back to work and I’m sure you want to see Jameson. I’d appreciate it if you could take over the search for another nurse for him. Maybe you’ll find someone who’ll stick around.”
Because he, sure as hell , wouldn’t.

“You’re the one who left, remember?”
How could he ever forget?

Celebrated entrepreneur Mack Holloway has come home to Moonlight Ridge to care for his foster dad and save his family’s once-luxurious resort. But to accomplish either he must face his past—the woman he left without a word, resort manager Molly Haskell. He’s never admitted what drove him away, and he’s not ready to confess now, even when working in close quarters ignites a fiery passion that burns away everything else. But Molly is keeping secrets of her own that could bring them to the brink…
Book Links: Amazon | B&N | iTunes | kobo | Google |

Joss Wood loves books and travelling— especially to the wild places of Southern Africa and, well, anywhere. She’s a wife, a mom to young adults and slave to two cats and a dog the size of a cow. After a career in local economic development, she now writes full time. Joss is a member of the RWA (Romance Writers of America) and ROSA (Romance Writers of South Africa.)
Website | Facebook | Twitter | Instagram | GoodReads |