Today it is my pleasure to Welcome author Wendy Rich Stetson to HJ!

Hi Wendy and welcome to HJ! We’re so excited to chat with you about your new release, Hometown! 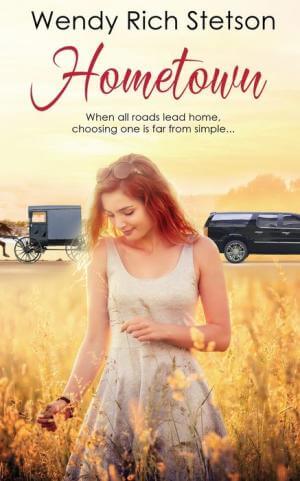 Newly fired from the teaching job she never really wanted, Tessa Meadows retreats to her childhood home in sleepy Green Ridge, PA to housesit for her globe-trotting parents. After a chance encounter with an Amish family over whoopie pies and yet another with her second grade Sunday School teacher who now works at the local hospital, she finds herself in an unlikely love triangle between a strong, silent carpenter and a dashing young doctor. Since when is her hometown crawling with hot guys? Still, the doctor might be a hair too perfect, and the Amish guy isn’t likely to return her texts. Turns out that when all roads lead home, choosing one is far from simple.

Look out whoopie pies—I’m back in town!

I’d be lying if I said Tessa wasn’t loosely based on me. Like me, she’s a 5’10” redhead from a little town in Central PA’s Amish country. When I first imagined her story, I was no older than she is. I, too, was unsure where life would take me and struggling to find my home. What surprises me now, many years later, is that although I live in New York City and Tessa does not, we both discovered early on that home can be a person not a place. Her journey to that discovery is rockier than mine was, and I continue to be surprised by the courage and generosity she displays in the final chapters of the book. She deserves every ounce of the happiness that finds her.

Having done more than my fair share of movie auditions, I’d choose a scene that lets the actors have a little fun and show off their comedic chops. As a side bonus, this event definitely takes a surprising turn in the middle. Without too many spoilers, our Amish hero is a bit of a speed demon! The scene opens with them riding in the poptop camper van one beautiful summer evening…

He sat back in his seat, bracing both hands on the dashboard, long, strong fingers splayed wide. “Go fifty-five now.”
Tessa Meadows was a rule-follower to her core. Her prime directive for twenty-eight years was to avoid getting yelled at by strangers. She glanced sidelong. He faced her now, right hand on the dash, left hand just below her headrest. She could almost feel the heat from his palm on the back of her neck. “But the speed limit is only forty-five.”
He lifted his chin, and his eyes darkened. “Go fifty-five.”
She gripped the wheel. “Break the speed limit?”
“Uh huh.”
One side of his mouth rose in that delicious, half-smile, sending crinkles shooting from his eyes. Her stomach pulled in the tingly flutter of ten thousand, electric, hummingbird wings. For this man, anything. With a jolt, she crushed the accelerator, and the needle inched toward fifty-five.

When readers turn the final page of “Hometown,” I want them to feel like they, with Tessa, have finally come home. Life is full of surprises, and home doesn’t always turn out to be where and with whom we imagined. Often, it’s infinitely more interesting. If, like Tessa, we’re true to ourselves and generous to those we love, I believe a home eventually finds all of us in unexpected and delightful ways.

I’m in the thick of book two of the Hearts of the Ridge series, in which an unexpected character from “Hometown” gets a well-deserved happily ever after. Just as for Tessa, this character’s story unfolds in a completely unexpected way. Not to give too much away. but I promise country music and tap dancing senior citizens.

Giveaway: $10 Amazon gift card and an electronic copy of “Hometown”

To enter Giveaway: Please complete the Rafflecopter form and Post a comment to this Q: Could you give up all technology and the conveniences of modern society for love?

“Will you build me a gazebo?” A round of applause for that beautiful bit of awkwardness. No “hello.” No “hey, good to see you again, thanks for the firefly show the other night.” Nope. The following Wednesday, Tessa strode up to Rishels’ Farm Stand, looked Jonas in the eye, and lobbed her request like a cherry bomb into the whoopie pies.
So eloquent.
But the cherry bomb wasn’t the only metaphorical firework that afternoon. The backs of her hands tingled like she held a sparkler in each one. Lingering behind his house in the lamplight, she found talking to Jonas almost easy. Now, beneath harsh fluorescents, simply forming a sentence proved nearly impossible.
His sister Nora hovered around the whoopie pies.
“What’s that now?” He crossed his arms and cocked his head.
Hello again, biceps. She sucked in a breath. “A gazebo. For my backyard. I figured since you do carpentry and all…” This encounter had gone much more smoothly in her head.
Beneath his wide brim, he slid Nora a glance.
She spun and, despite the catch in her step, stalked to the milk crate by the door. Folding her hands in a manner that could only be described as prayerful, she lowered herself and radiated disapproval.
He ran a thick hand over the back of his neck and stared at the ceiling. “Well, most of the building I do is for…”
For the first time in her presence, he faltered.
“Well, for the family and for…other farmers.”
She tugged the suddenly too-tight waistband of her skirt. Of course. Jonas Rishel limited his carpentry to the Amish. “I see.”
“Now, you can buy a gazebo out Route 45 at King’s Farm. Lucas King sells all manner of garden things. He does fine work.”
She shook her head. “My gazebo has to be unique. It’s a gift for my parents for their thirtieth wedding anniversary. I want it to be special.”
Widening his eyes, he stepped closer. “Custom?”
A flicker of hope lit in her chest. She scooted to meet him, bumping her thighs against the stand and jiggling the pies. “Yes, custom.”
“In what way?”
She looped her thumbs through her backpack straps and tugged it tight to her shoulders. Closing her eyes, she tried to summon the gazebo from her dream, but she couldn’t. “I haven’t quite figured it out, but it needs to be one of a kind.”
“Doesn’t Lucas King sell gazebos to tourists?” Nora called from her roost.
She shot the woman a glare. “I was born here.”
Jonas’s eyes crinkled at the corners. “I don’t know that King fills custom orders.”
The tingling in her hands surged up her arms and spread across her collarbones. “I just love your garden gate, and if you could build a gazebo like that—natural and whimsical—it would be the most perfect present ever.”
Nora hauled to her feet with an unintelligible grunt.
A smile tugged at one side of his mouth. “You liked that, did you?”
“I liked it a lot.” Turns out swooning wasn’t limited to Victorian ladies whose corsets were too tight. The traveling sparks completed their journey to her head, and her brain buzzed like she took a sip of champagne. The hubbub of the market morphed into the adult voices in Charlie Brown specials. Placing one hand on the table, she steadied herself and found the courage to meet his gaze. “Would you maybe just consider building me a gazebo?”
“Bring me a sketch of what you want it to look like,” he said, “and I’ll see what I can do.”
Nora gaped. “Jonas!”
He didn’t flinch. “I could use the work. Thank you for thinking of me.”
Tessa had no beef with Nora Beiler. She didn’t even know the woman. Still, Jonas’s assent felt like a mini victory. A flush of satisfaction bloomed in her cheeks, and she dropped her gaze. Gloating was unbecoming. “A sketch. I can do that. Thank you.”
She hadn’t made it two steps from the table when Nora launched into a tirade in Pennsylvania Dutch. Her tone left no doubt as to her meaning. Translation? This gazebo was so not happening.
“Enough, Nora,” Jonas said.
His voice was heavy as wet cement. Glancing over her shoulder, she caught a glimpse of sky-blue shirt as he disappeared through the door. She whipped around and lit off for the refuge of Troutman’s Famous Fries.
Something about that family just didn’t sit right. Why was Nora angry all the time? How did Jonas endure her? Why did the three of them live alone in that big, old farmhouse? They were a mystery. She popped a fry and shivered at the tangy explosion of vinegar and salt.
A mystery she was determined to solve.

When Tessa’s big-city plans take the A Train to disaster, she lands in her sleepy hometown, smack in the middle of the most unlikely love triangle ever to hit Pennsylvania’s Amish Country.
Hot-shot Dr. Richard Bruce is bound to Green Ridge by loyalty that runs deep. Deeper still is Jonas Rishel’s tie to the land and his family’s Amish community. Behind the wheel of a 1979 camper van, Tessa idles at a fork in the road. Will she cruise the superhighway to the future? Or take a slow trot to the past and a mysterious society she never dreamed she’d glimpse from the inside?

Wendy Rich Stetson is a New York City girl who still considers the Central Pennsylvania countryside to be her home. She grew up road tripping in a 1979 VW camper van, and she keeps a running list of favorite roadside attractions from coast to coast. Now an author of sweet, small-town romance, Wendy is no stranger to storytelling. She’s a Broadway and television actress, an audiobook narrator, and a mom who likes nothing more than collaborating on children’s books with her teenage artist daughter. Wendy lives in Upper Manhattan with her family of three and rambunctious Maine Coon kitty. Follow Wendy’s journey at www.wendyrichstetson.com
Website | Facebook | Twitter | Instagram | GoodReads |

« Spotlight & Giveaway: All the Best Nights by Hanna Earnest
REVIEW: Ways to Tempt the Boss by Joanne Rock »