Today it is my pleasure to Welcome author Hanna Earnest to HJ!

Hi Hanna and welcome to HJ! We’re so excited to chat with you about your new release, All the Best Nights! 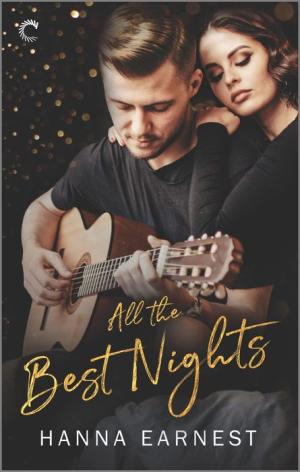 Okay so: ALL THE BEST NIGHTS is a contemporary romance about Bran, a rockstar with writer’s block, and Nelle, a popstar on the rise. The book starts with them on this terrible date, that Bran is just bombing because he’s in his feelings, and of course Nelle sparks a lyric for him. And suddenly, she has his full attention, she becomes his answer. Which was all she wanted when she was fourteen and his fangirl. But she’s on his level now, and she knows that even if she’s more popular or more talented than he is, a public relationship would tie her career to Bran’s name. She can have him, but no one can know. Throw in a few more romance reasons (the tension between fame and privacy, good old-fashioned lust) and it’s on: they elope for the thrill of keeping a secret—dealing with what it’ll cost along the way.

The short, obvious answer to what inspired a book about a songwriter trying to keep her relationships from eclipsing her talent is: Taylor Swift. I love her music, her story telling, the conversation she creates across her albums. I’m fascinated by the clues and in deep with the clown theories. I wanted to write a story that captured the intrigue between what a song reveals and what it holds back.

I used a lot of objects to help with characterization. Answering: What’s in his pocket? was the key to unlocking Bran. Nelle’s arc was a little tougher because what she carries isn’t physical. It’s her pride, her trust. Her innate confidence made it hard to figure out where she’d draw the line with Bran. How she’d change her mind about what she was willing to risk.

I had a lot of fun with every chapter, but especially the scenes with momentum: any time a rendezvous turns into a fight, or the status quo changes—like when Nelle shows up at Bran’s door after they agree to keep their distance.

She bit her lip. His gaze fixed on her mouth. That set of plump pink lips that he had never gotten to kiss goodbye. And now she was here. On his stoop. Her heartbeat twitching in his hold.
One night, they’d said.
One night.
It should have been enough.
But it wasn’t. For either of them.
“Fuck it.” Bran tugged her to him, sliding one hand up her neck, the other across her lower back. Her mouth met his in a hungry kiss. She fisted the T-shirt at his sides, pulling him even closer—he didn’t care if she ripped it this time. He had missed this. He had missed her. She was a song he couldn’t get out of his head, one he played on repeat and wasn’t sick of yet.
His forehead rocked against hers. “You need to come inside.”
She nodded and he hated the way the motion took her mouth an inch farther from his. Quickly, he claimed her lips again.
“We’re gonna—Okay—” Bran pulled back, dazed, trying to force the blood back to his brain. “You’ll sneak up the back stairs and I’ll get rid of Cormac and Arlo.”
Nelle reached for the suitcase but he already had the handle. He wrapped his other arm around her waist and hauled them through the door.
“I can walk,” she said, trying to twist out of his grasp.
“Basic marriage rules: I have to carry you over the threshold.” Bran grunted through the effort. “I’m being romantic.”
“You’re crushing my ribs.”

The Note Awards ceremony for sure. There’s so much going on for Bran and Nelle at that moment. She has to perform and he’s nominated, they both have family stuff in the back of their minds. When they meet on the red carpet they have so much to say to each other but there are too many cameras, too many eyes on them. Those scenes had to do so much.

Oh, it’s definitely on brand—maybe a little too much! We joke at my book club about the specific attributes of a book that “meet our nutritional needs” (mine are high angst and lots of sharp dialogue). I like books that feel personal. As much as this book is a big story with big moments, it’s also intimate and interior. And, on a craft level, I’m like Bran: I love double meanings and ALL THE BEST NIGHTS doubles down on them.

I hope readers are entertained, that they enjoy the ride. For me, feeling all the feelings is the whole point!

Right now I’m working on Nelle’s best friend Benj’s story (there’s a hint about it in ALL THE BEST NIGHTS).

Giveaway: 1 print copy of ALL THE BEST NIGHTS by Hanna Earnest (U.S. and Canada only).

To enter Giveaway: Please complete the Rafflecopter form and Post a comment to this Q: Whose poster did you tape to your wall during your obsessive teen years?

Excerpt from All the Best Nights:

He couldn’t see Nelle clearly in the dark car but he imagined her washed out, pale under her rosy painted cheeks. That’s how she sounded when she asked to pull over in the next alley. Faint.
He had pushed. Instead of just accepting a night of sex with a pop goddess. And now no need for a last name Nelle was going to lean out of his sports car and vomit.
“Here?” He sidled the car up next to a dumpster.
“That works.”
The seat belt clicked as she unbuckled it.
Bran leaned forward to crank the heat in anticipation of the door opening when her warm hands caught his cheeks, tugging his face towards hers. His brain stalled out as she pressed her mouth to his, freezing on the image of that lipstick print on the rim of his glass. Then he was reacting, leaning farther into her, parting her lips with his and tasting her fancy lemonade tongue. His foot eased off the brake and the car rolled forward.
The car lurched as Bran slammed his foot back down, fumbling with the clutch in between them, unwilling to break away from the sweet tang of her. But she was pulling back, her breath hitting his face in hot puffs. She nodded with her eyes closed, released him, and buckled herself back in.
They both stared straight ahead.
His hands gripped the steering wheel. “What was that?”
She sifted a hand through her hair and tossed it at the window, exposing the skin behind her ear. Skin he wanted to press his mouth against, feel the tremble of sound from her throat on his lips.
“I had to check.”
“Check what?”
“That this wasn’t a waste of time. But you can kiss. And I want to kiss you more. I’m good now.”
“You didn’t want to agree to a one-night stand slash secret marriage if I was going to fish-mouth you?”
“Right. And you didn’t. So, we’re all set.”
“Just based on a kiss? What if I’m bad in bed?”
She shook her head. “There was a Reddit thread about you. Consensus is you have a big dick and you know how to use it.”
He’d assumed it was nerves, the way she said what she was thinking so unguardedly. But maybe it was just her. And she was completely comfortable bringing his dick up in conversation. Completely capable of bringing his dick up in general.
Bran was suddenly less comfortable, aware of the limited room in his fitted pants. “That’s not at all degrading. When did you look that up?”
“It doesn’t matter. I’m good—are you good?”
“Apparently, yes.” He knocked the car back in Drive but didn’t release the brake. “Do you need anything else? Before we go?”
“We left without dessert.”
“So you want to—” fuck in this alley didn’t sound great. Except that it sounded so great.
She pulled out her phone. “There’s a Magnolia Bakery on State and Randolph, it’s a couple blocks—here.”
He pushed the phone down, the lit map glaring through his fingers. “I don’t need directions. I know how to get there.”
“You grew up around here? I thought I’d heard it was outside the city.”
She was full of questions, and seemed to have a knack for narrowing in on the ones he was most reluctant to answer. Still, something about her compelled him to do it, to reveal more of himself than he would normally like—maybe he was afraid she’d walk out or kick him in the shins again if he didn’t.
“My gran’s house was South Side. In the Ks. I spent a lot of time there.”
“So why don’t you tell people that?”
“Because I didn’t want them to bother her.” He tapped his teeth together, considering how much more to say. “When I was eighteen some people broke into my dad’s house.” His dad had said it was fans. Judith hadn’t even been that popular yet. For the first time it crossed Bran’s mind that his dad might have been lying. Bran shook his head. “She collected, she saved everything. That house is full of memories—memories to us that would be memorabilia in someone else’s hands. You know what it’s like—everyone thinks it’s just one touch, their touch, but it’s more than just them. And it’s your features that are worn away.”
His jaw tensed and he couldn’t look over at her, where he felt her stare like a beam of light on his face.
“Bran—”
“We should go.”

Some realities are better than the fantasy.

Coming down off his tour, an album long overdue, singer-songwriter Bran Kelly feels like everyone wants a piece of him.

What Bran wants is inspiration from no-need-for-a-last-name pop star Nelle, the blazing talent he’s been dreaming of for over a year. Ever since the magic moment she slipped her number into his pocket at an industry after-party, her breath raising the hairs on his neck as she whispered into his ear.

Nelle’s achieved every one of her professional dreams and now it’s time to get personal with a few hours of hot hotel sex with Bran Kelly—as long as she doesn’t get caught. Finally in the same city, on the same night, the lyrics spark…and so does the sexual tension.

Except that one night isn’t enough.

And when Bran proposes they up the ante—create something off the record, just for the two of them—they’ll have to decide how far they’ll go to keep the biggest secret of their lives.

24 Responses to “Spotlight & Giveaway: All the Best Nights by Hanna Earnest”