Today, HJ is pleased to share with you Loreth Anne White’s new release: IN THE DEEP 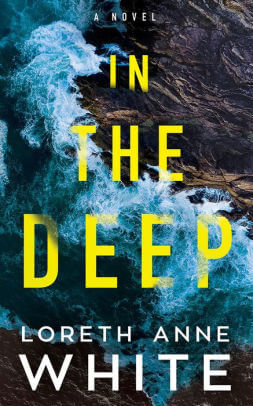 I hope you don’t find him. And if you do, I hope he’s dead and that he suffered…

Real-estate mogul Martin Cresswell-Smith is the best thing that has ever happened to Ellie. After her daughter’s devastating death, a divorce, and an emotional breakdown, he’s helped her move as far as possible from the grief, the rage, and the monsters of her past. Ellie imagines her new home with Martin in an Australian coastal town will be like living a fairy tale. But behind closed doors is another story—one that ends in Martin’s brutal murder. And Ellie seems almost relieved…

Senior Constable Lozza Bianchi has reasonable doubt. She sees evidence of a twisted psychological battle and a couple who seemed to bring out the worst in each other—adultery, abuse, betrayal, and revenge. If anything Ellie says can be believed, that is. As the case takes twist after spiraling twist, Lozza can’t shake the gut instinct that she’s being manipulated. That Ellie is hiding something. That there are secrets yet to surface. Lozza has no idea.

Enjoy an exclusive excerpt from IN THE DEEP

Now, February. Supreme Court, New South Wales. I see the crowd as soon as the sedan hired by my legal team turns onto the street. Galvanized by the sight of our black Audi, the mob surges forward. Police struggle to hold the agitators back. I see mouths open wide, yelling. Cameras. Reporters. Microphones. Faces red and hot in the Sydney summer sun. I can’t hear them, though. The air-conditioned interior of our car is cool and smooth and silent, but as we near the courthouse, I’m able to discern the text on the placards being waved at us. At me.

KILLER!
JUSTICE FOR MARTIN!
LOCK HER UP

I feel like Alice slipped through the looking glass. Off with her head then . . . This cannot be happening. This cannot be real. I press palms firmly onto my thighs, terrified by the ferocity that my trial has unleashed. I try to keep my face expressionless, as per my legal team’s coaching. But a man slams the front page of this morning’s City Herald against the window near my head. I flinch. My heart beats faster at the sight of the angry black letters that march across the top of the page.

Below the headline is a photo of me.
Next to my photo is an image of Martin. A graphic artist has cre¬ated a slash that jags between our faces—like a rip through the page, symbolic of the deadly rift between us. My eyes burn. Inside my belly I begin to shake. He looks so vital in the photo. So alive. I loved him once. I loved him with all my heart.
A female cop in a pale-blue short-sleeve shirt and bulletproof vest, her face ruddy beneath her cap, yanks the man away from the car. I feel the first flicker of real panic.
Our driver slows. Uniformed officers battle to restrain the jostling onlookers as traffic cones are removed so we can park. People line the stairs all the way up to the Supreme Court entrance. At the top of the stairs, more reporters wait with mikes. One of them stands out—a woman in a bloodred jacket. She’s tall and her white-blonde hair gleams in the fierce February sun. Melody Watts. I recognize her from the nightly Sydney news. A flock of cockatoos takes flight into the sky behind her, flashes of white and yellow darting up between the build¬ings into a bright-blue yonder. A sign, I think. Because I cannot go to prison. I will be free. Like those birds soaring up, up, and away into the sunshine. My lawyers have got this. They’ll convince the jury of reasonable doubt. They’re the best in the business, and they come with the price tag to prove it. We’re going to win this.

This is the persona I must project. I must convince the jury of twelve that this is who I am. I need to put on the performance of my life.
And yes, it will be a show. Because that’s what all these people have come for. Theater. Everyone is here for the spectacle that is a salacious Supreme Court murder trial with international implications. And I’m the star. I’m the one who has apparently disrupted the natural order of things, and when natural order is upended, it rattles the human psyche. These folks all want to stare at me now. The car accident. The freak. The evil. They want to see me punished and locked away so they can tuck their children safely into their beds at night and pretend this isn’t nor¬mal. They want to see for themselves what I look like so that if—in the future—they spy someone just like me coming down the street toward them, they will know, and they will cross to the other side of the street to avoid the Monster before it comes too close, where it can brush against them, infect them, beguile and bewitch them.
I glance at Peter Lorrington, my barrister, who sits beside me in his regal black robe and crisp white court bib. His judicial wig rests upon his knee. He has earbuds in his ears. He’s watching a live news clip on his phone. I replay in my mind his earlier words.
“Murder consists of two elements—the intention of the accused, and the act. The prosecution must prove both to the jury. Both that you intended to kill Martin, and that you did in fact kill him. The prosecution is missing the key element of that equation. And remember this—anything can hap¬pen in a jury trial. Anything. At the end of the day, all we need is to show reasonable doubt. We can do that.”
Lorrington’s strategy is to both undercut the police investigation and deliver to the court an alternate narrative of events that matches the forensic evidence. A story where I did not murder Martin. A story where the cops screwed up. It will be his story versus the prosecutor’s Loreth Anne White
story. That’s ultimately what a jury trial is—a battle of two narratives. A fight for the very heart and emotions of the jurors. Lorrington said that, after all, a jury trial hinges on emotion more than logic.
I’m a victim. I was framed. I’m not a killer.
Deep breath. Assume identity . . .
Victim.
I smooth my damp palms over my tan linen skirt. The tan of neu¬trality. Like my flat, nude-colored shoes. Neutral. My blouse is simple, white. The white of innocence. I adjust my pretty horn-rimmed glasses. They say hardworking. My hair has been cut. No polish on my nails. I could be a librarian. I could be your sister, your mother. Your girlfriend. I could be you. Demure. Gentle. Empathetic. Sensitive. Wronged. So very wronged—framed, in fact.
I’ve played this character well and often throughout my life. I can do it again. I’m adept at masks. An expert, really. I learned from one of the best. My husband. The deceased. Martin Cresswell-Smith.
The car comes to a stop. Thump, thump, thump goes my heart.
Lorrington takes out his headphones and turns up the volume on his phone so I can hear. It’s the reporter outside, the one at the top of the stairs—Melody Watts. Her Australian accent is blunt.
“. . . the accused is arriving now with her barrister and solicitor.”
Camera angles change, and suddenly we’re looking back down at our car. The effect is surreal. Melody Watts is saying, “Mrs. Cresswell-Smith has been out on bail since her arraignment just over a year ago. Bail was set at one point five million. At the time Magistrate Robert Lindsay found the Crown’s case against the accused was ‘not weak,’ but he ultimately determined its strength was outweighed by a number of factors, including Mrs. Cresswell-Smith’s need to prepare for trial with her legal team, plus her lack of criminal history in New South Wales. He said”—Melody Watts consults her notebook for the exact quote—“‘While murder is the most serious offense, refusal of bail is not to be deemed as a punishment, as there is still a presumption of innocence
in the bail act.’” She looks up at the camera, and the sun catches the whiteness of her teeth. “Mrs. Cresswell-Smith was not deemed to be a danger to the community, and she surrendered her passport.”
Lorrington puts on his wig and adjusts his robe. Suddenly my mouth is bone dry.
We exit the car.
Humidity slams me like a wall. Sound is suddenly explosive. The crowd jostles, chatters, jeers, taunts. Mobile phones are held high, recording, snapping photos. Press cameras zoom in with monstrous telephoto lenses. My barrister touches my elbow gently and escorts me up the steps, his robe billowing out behind him. The journalists clamor forward, mikes reaching out. They’re after blood. Which will boost rat¬ings in an era of dying media, and their desperation is ugly.
“Mrs. Cresswell-Smith, did you kill your husband?”
“Did you do it? Did you kill Martin?”
A searing flash of memory blinds me and I almost stumble. Blood. Martin’s. The fishing knife . . . the fury in Martin’s eyes. The bitter bile of betrayal in my throat.

Excerpt. ©Loreth Anne White. Posted by arrangement with the publisher. All rights reserved.

Giveaway: 3 finished copies of IN THE DEEP by Loreth Anne White (US and CAN only).

Loreth Anne White is a Washington Post and Amazon Charts bestselling author of thrillers, mysteries, and romantic suspense, including In the Dark, The Dark Bones, A Dark Lure, and the Angie Pallorino series. A three-time RITA finalist, she is also the Overall 2017 Daphne du Maurier Award winner, and she has won the Romantic Times Reviewers’ Choice Award, the National Readers’ Choice Award, and the Romantic Crown for Best Romantic Suspense and Best Book Overall. In addition, she’s an Arthur Ellis finalist, and a Booksellers’ Best finalist. A recovering journalist who has worked in both South Africa and Canada, she now resides in the mountains of the Pacific Northwest. When she isn’t writing, you’ll find her cross-country skiing, open-water swimming in the lakes and ocean, or hiking the trails with her dog (a.k.a. the Black Beast) while trying to avoid the bears. She calls this work because that’s when the best ideas come. Visit her at www.lorethannewhite.com.

23 Responses to “Spotlight & Giveaway: IN THE DEEP by Loreth Anne White”