Today it is my pleasure to Welcome author Paris Wynters to HJ!

Hi Paris and welcome to HJ! We’re so excited to chat with you about your new release, Issued! 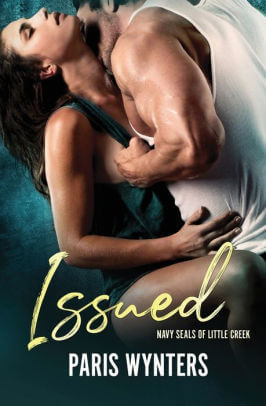 Issued is a story centered around an arranged marriage. The heroine, Taya, flees her life in NY when she moves to Virginia after being assigned as the wife to a Navy SEAL. While she volunteered to be part of the program, her husband was told about his participation. Therefore, he’s not too thrilled. The book focuses on their relationship as well as a secret she’s keeping, plus finding a new family to belong to.

More than anything, I want her words to be true, not some feeling mumbled as part of a dream, because being with Taya is like finding my place in the world. I belong here, wrapped around her and growing drunk off the smell of sandalwood. I want her completely. Forever and always. And I want to be hers.

Love was always that thing in movies that made people sing in the rain and climb castle towers. Love was a knight in shining armor and a picket fence. Yet, I have something better. Something real and unconditional. Something I’m willing to fight for.

Jim Stephens is a Navy SEAL who’s at Little Creek in VA Beach. He’s a divorcee and lives on his own. He loves surfing and finds the water to be his peaceful place. He also has an unhealthy love for Oreos.

Taya Maverick is the daughter of a detective. She is an only child whose mother died when she was younger. She’s a daredevil who loves to race her motorcycle. She’s also half Mongolian. She also volunteers for search and rescue.

I would say little parts of their personality surprised me, like Jim trying out yoga. That was something that came later due to a secondary character whose book I started planning out. Also, it was so interesting how Taya picked her search and rescue specialty as it isn’t a specialty I would do. I actually had planned her doing more of water rescue. But nope, she had other plans.

While I had the basics of my characters, I got to know them more when I began to edit and even started planning future books in the series. Some of their future personalities leaked through and it became lots of fun to go back and incorporate those other aspects and play around with scenes in the book. But it was also fun to get analyze what they would do or how would they react in a scene. So, the more I edited, the more they came into their own. It was a lot of fun. And I have to say, my beta readers also helped in pointing out areas where one of them was more acting the way I probably wanted them to rather than how they would really react. So, it definitely helped having someone tell me to take a step back almost like a parent having to step back and respect that their child is their own person and not a being we project our own selves onto.

My favorite scene to write was the one where Taya accidentally throws frozen BBQ sauce into oil. She can’t cook her way out of a wet paper bag.

Marge slaps the counter again, red streaks covering every available surface. It’s plastered all over the ceiling as well, dripping onto the hardwood like rain. “It’s barbecue sauce. It was premade. All you had to do was defrost it and add the meat. How do you fuck up barbecue sauce?”
“I thought you wanted me to put it in the water,” Taya explains weakly. “You know, to thaw it?”
Marge props a hand on her hip. “I’m assuming, by water, you mean the pot of oil I set up for the fries?”
Taya blinks rapidly. “Yes?”

One of the most difficult scenes for me to write was toward the end, where Jim is pushed to his limit and feels as if he is being punished. Breaking such a strong character was hard, and finding the way to do it correctly and dig deep enough was hard emotionally because I had to get inside his head. I had to try to understand that level of guilt and feel it.

I resist, thrusting my weight against his arm, but he wrestles me to the floor, pinning me against the cold, ceramic tile. “It’s my fault. God is taking my Taya to punish me for Aland.”
Bear adjusts his body on top of mine when I start clawing at the floor to drag myself over to Taya. Bear shakes me, and my head bobbles, pain shooting through my eyebrow as my face slaps the floor. “Stop! The bomb in that basket would’ve killed everyone in a mile radius. You are a hero. I get to hug my little girl because of you.”
Sobs wrack through my body. “I never should have left her alone.”
Bear’s grip loosens. “You can’t blame yourself for all the evil in the world, Jim.”
I can’t help her. I can’t save her. Tears spill from my helpless eyes as I shake uncontrollably under Bear. “I can’t lose her.”
“I know.” His words are just right and yet, not nearly enough.

This book is on point with my typical writing style. I love writing angsty and quirky characters.

I want people to learn a little bit about the Mongolian culture that is presented in the book. I also want people to come away with a sense of hope, that even when things aren’t perfect—even a bit dark—there is still a light at the end of the tunnel.

I just finished writing a sweet romance set in Mongolia for the winter holidays. That will be out January 2021. I’m going to start writing book three of the Navy SEALs of Little Creek series after the July 4th holiday. That book is coming out in 2021, while book two, Matched, is coming out September 1st of this year.

Giveaway: An ebook copy of Issued & 3 Tule ebooks of your choice

To enter Giveaway: Please complete the Rafflecopter form and Post a comment to this Q: Would you consider participating in a program similar to Netflix’s Love and First Sight, which is the same concept as the military matching program found in Issued?

Taya Maverick has just volunteered to marry a random Navy SEAL as part of the military’s new spouse-matching program. What other choice does she have? Her former best friend killed her father and torched her house. Taya’s determined to start over, but to be safe she has to disappear. The program is the perfect opportunity, complete with refuge and a built-in bodyguard. Her Navy SEAL husband can keep her safe, right?

After one spectacularly disastrous marriage, Jim Stephens nixes round two. But his commanding officer never accepts no for an order. While an injury may have sidelined him temporarily, Jim still needs to salvage his career after a mistake in combat puts him in leadership’s cross-hairs. Being the first in the pilot program guarantees him his rank and eventual active duty clearance…as long as he can last the trial year.

The I dos are barely uttered before Jim and Taya realize they’ve each miscalculated. Their sizzling chemistry might lead to bed, but neither is prepared to open their heart. And then Taya’s past comes knocking…

Paris Wynters is an adult romance author repped by Tricia Skinner at Fuse Literary. She lives on Long Island (in New York) with her family, which includes two psychotic working dogs. Paris is a graduate of Loyola University Chicago.

Paris and her son are nationally certified Search and Rescue personnel (she is a canine handler). She is a huge supporter of the military/veteran community. When not writing, Paris enjoys playing XBOX (she is a huge HALO fanatic and enjoys FORTNITE), watching hockey (Go Islanders), and trying new things like flying planes and taking trapeze classes.
Website | Facebook | Twitter | Instagram | GoodReads |