Today it is my pleasure to Welcome author Kilby Blades to HJ!

Hi Kilby and welcome to HJ! We’re so excited to chat with you about your new release, It Takes a Villa!

Hey! So glad to be here with you all! For folks who don’t know me, I’m Kilby. I got my start writing fan fiction and I started publishing my own novels in 2017. I love everything Romance—reading it, writing it, watching movies and shows I can ship. I’m super into audiobooks and I’m obsessed with the voices of the narrators who narrate my books! 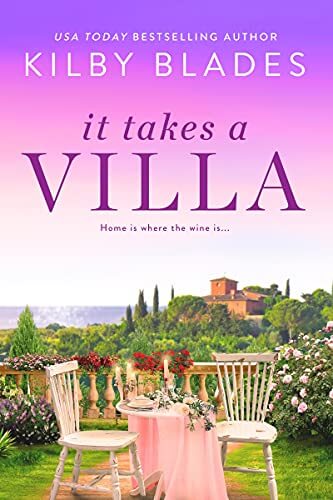 You might have heard about the programs that let you buy decrepit properties in Europe for €1—properties that are basically abandoned, located in towns that want to see them fixed up. These towns benefit from such programs because they prevent architectural decay. On top of that, they create local jobs and bring in foreign investment, which may help revitalization at a regional level.

In It Takes a Villa, my heroine (Natalie) buys a crumbling Italian villa for €1 with a plan to turn it into a B&B. In her day job back in America, she was a professional risk manager. As a result, she thinks she’s thought her renovation project (and the related costs) all the way through. When she arrives in Italy, she discovers the villa is in worse shape than she thought. She’s put every last penny she has into her renovation and it’s immediately clear that it can’t be done on-budget or on time.

Enter Pietro, a sexy, grumpy architect who tends to agree with her assessment. He’s tired of all the foreigners who arrive in his gorgeous seaside town woefully unprepared. He’s actively working to dismantle the redevelopment program that Natalie is a part of. He’s seen too many botched jobs and garish design choices to condone it. His first impression of Natalie confirms his every unflattering notion, and he all-but tells Natalie to quit.

Things take a turn for them when he realizes they have something in common: a commitment to preserve the history of the buildings (Natalie is an amateur art history buff!) He also becomes interested in a family mystery relating to her late grandmother (who used to live in the same region of Italy) that Natalie needs to solve. As time passes, he can’t decide which he wants more: to help her or to kiss her. In the end, he decides to do both.

I really love proverbs and idioms. I use a few in this book, some translated, some not. I think the imagery behind idioms is interesting. For example, cercare I peli nell’uovo means “to look for hair in the egg” or, to nitpick. Idioms are such living parts of a language and I just love playing with them. Italian also has some amazing rhyming proverbs, like, per nozze e lutto, si lascia tutto: at weddings and funerals, one lets go.

Pietro is heir to a lemon fortune. His family grows a special kind of lemon that only grows on the Amalfi Coast, the sfusato Amalfitano. This lemon is larger than other lemons and has sweet and juicy flesh. These lemons can be eaten as one might eat an apple, bitten into whole with the skin on. Even the rind is sweet!

Pietro is determined to dislike Natalie based on what she represents. He’s ready to write her off as a typical expat that’s in over her head. He starts to realize she’s different when he sees her dedication to restoring the villa in a way that maintains the history.

She strongly suspects that he disapproves of her, but she likes that he’s an architecture geek and, obviously, that he’s smoking hot.

One of my favorite relationships in the book is Pietro’s relationship with his nonna, the word for “grandmother” in Italian. Every scene I wrote with them was a delight. Here is a scene with them at the pastry shop (pasticceria) that I absolutely love!

Believing her own lemon pastries far superior to anything that could be found in the pasticceria, Nonna liked to order them for sport, just so that she could quietly brag about the fact that hers were better. According to Nonna, Signora Maldotta did not use enough egg in her lemon crostata, used lemons that were too bitter in her delizie del limone, and positively ruined her lemon ricotta cake with too much caster sugar.

It was for this reason that Pietro ordered two desserts every time they visited the pasticceria: one of whatever dessert he really wanted, plus a non-citrus favorite of his Nonna’s—something that she never made herself (and therefore could not compare) and might actually like. This, because Nonna would only finish one or two bites of whatever lemon dessert she had insisted on ordering but felt was beneath her.

The same routine that would be repeated now carried out with every visit. After his Nonna’s face soured in disgust and she pushed her plate away, Pietro would insist on sharing some of what he had gotten for himself. They would eat the rest of each of those without incident. Then, left with Nonna’s barely-eaten original dessert, Pietro would offer to finish a respectable amount so as not to insult the owner of the pasticceria.

Not that any of this was a surprise to Signora Maldotta. Nonna was not always subtle about her gripes. The quality of the Signora’s confections as compared to his Nonna’s was a long-standing feud between the two women.

“Pietro. Please. I can’t.“ Nonna threw an accusing look at the pastry, as if the confection itself had insulted her. “I have told her many times not to ruin it by using whole almonds rather than blanched almonds. I even whispered this secret into her daughter’s ear. Do you think she was thankful?”

She didn’t wait for Pietro to answer with a “no.”

“She knows that I am right, but she has too much pride to take my advice, though I only want her store to be a success.“

Pietro didn’t mention that, out of all the businesses in Zavona that wasn’t struggling, the pasticceria was one. She had only to walk by at the busiest hours of day to see a line out the door. Nonna herself would have been ecstatic if there were enough shoppers in her own store to warrant a line.

“You cannot blame her for being jealous, Nonna. It is not her fault that our family grows the best lemons and that she cannot impress you, the best baker in town.“

“One of the best bakers in all of Campania,“ Nonna corrected, raising one finger in front of her face to emphasize the point. “I’ve known how to bake since I was a child, but I, too, had to humble myself to learn the art of baking with lemons.”

Pietro made no attempt to hide his smile. “Yes, Nonna, you are quite humble. I have noticed this as well.”

because it will take you to another place. I used to be a food, wine and travel writer and the places I write about are all places where I’ve lived or traveled. Some of them are also places where I’ve fallen in love.

I also write for Smartypants Romance, in Penny Reid’s Green Valley universe. I have a new title coming out that I can’t tell you much about. The heroes in the series I’m writing in are firefighters. My first book in the series, Forrest for the Trees, was about a federal fire marshal. The next book is about a fire EMT.

Giveaway: 1 Print copy of It Takes a Villa by Kilby Blades to any winner in the USA or Canada.

To enter Giveaway: Please complete the Rafflecopter form and Post a comment to this Q: If you could buy a dream house anywhere in the world, where would you buy your house and why?

When a woman buys an Italian villa for one euro, hoping to rebuild both the villa and her life, everything that can go wrong will go wrong in this fun new romantic comedy series from USA TODAY bestselling author Kilby Blades.

For the reasonable price of $1, Natalie Malone just bought herself an abandoned villa on the Amalfi Coast. With a detailed spreadsheet and an ancient key, she’s arrived in Italy ready to renovate—and only six months to do it. Which seemed reasonable until architect Pietro Indelicato began critically watching her every move…

From the sweeping ocean views to the scent of the lemon trees, there’s nothing Pietro loves more than his hometown. And after seeing too many botched jobs and garish design choices, he’s done watching from the sidelines. As far as he’s concerned, Natalie should quit before the project drains her entire bank account and her ridiculously sunny optimism.

With Natalie determined to move forward, the gorgeous architect reluctantly agrees to pitch in, giving her a real chance to succeed. But when the fine print on Natalie’s contract is brought to light, she might have no choice but to leave her dream, and Pietro, behind.
Book Links: Amazon | B&N | iTunes | kobo | Google |

Kilby Blades is a USA Today bestselling author of Romance and Women’s Fiction. During her fifteen-year career as a digital marketing executive, she moonlighted as a journalist, freelanced as a food, wine and travel writer, and lived it up as an entertainment columnist. She has lived in five countries, visited more than twenty-five, and spends part of her year in her happy place in the Andes Mountains.

29 Responses to “Spotlight & Giveaway: It Takes a Villa by Kilby Blades”