Today it is my pleasure to Welcome author Tawna Fenske to HJ!

Hi Tawna and welcome to HJ! We’re so excited to chat with you about your new release, Just a Little Bet!

Hellloooooo, all you lovelies! Thank you so much for having me. I would absolutely give you awkward hugs and butt pats if it weren’t for the whole social distance thing. 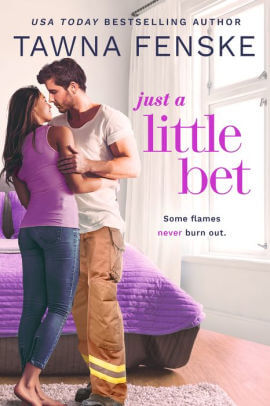 Best friends who used to bang take a road trip to grill his exes and settle a bet about why he sucks at relationships, only to discover they might be perfect for each other.

“Uh-oh.” Kayla Gladney sipped her beer and squinted across the dim expanse of Boyton Ballroom’s central bar. “Breakup at three o’clock.”
“What? Where?” Willa leaned back on her barstool, then yelped as she started to topple.
Kayla made a grab for her, but Willa’s hottie husband moved quicker. Grady caught his wife by the waist, grinning as he glanced across the room to watch their friend—and his teammate—Tony, deep in conversation with a pretty brunette.

Tony and Kayla dated for a hot minute in the first book in my smokejumper series, THE TWO-DATE RULE, and they bonded over music and outdoorsy pursuits. They split after a month and remained best friends, so this book picks up one year later as Tony is going through yet another breakup and realizing he might like to get to the bottom of why he’s so bad at relationships.

While Tony and Kayla dated before JUST A LITTLE BET begins, they’ve been purely platonic friends for a year at this point. The first kiss in this book takes place in a hotel room on their road trip right after Kayla adopts a rescue dog and feels a bit rattled by how it all went down (er, she may have been caught peeing behind a tree by two strangers bickering about the dog neither of them wanted). After Tony shows up and takes Kayla back to the hotel, she initiates the first kiss to defuse the tension bubbling between them since the trip began.

I relate very much to the scene in which Kayla attempts to meditate, only to be thwarted by her own over-active brain….

Kayla made her way to her chosen spot and folded herself into a kneeling position on the grass.
And then unfolded herself because ow, her knees. Okay, so cross-legged would work just as well. She set the camera bag off to the side, determined to do this right. Resting the backs of her hands on her knees, she let her fingers splay out, palms open to the sky the way she’d read about in her book.
There; that was nice. She was getting into it, feeling Zen and relaxed. She let her eyes fall shut and tried to think about peaceful things. Calming things—soothing stuff like…like ice cream. Yes, ice cream, that was good. She pictured the vanilla cone in her hand, the creamy goodness glinting in sunlight. She could picture it so clearly, imagining the rivulet of white dripping down the cone and over her knuckles and—
Ugh, no. That was no good. Sticky hands weren’t relaxing. She opened her eyes, determined to stay with the plan. The river—that was key. Maybe she should focus on the water, the gentle current, the way the silvery surface rippled and churned over rounded rocks glinting with damp sunlight.
Look at how the reeds swayed and shifted with the water, undulating just below the surface. A fish! Was that a trout? Or no, maybe a steelhead. She’d have to look it up later, maybe google to find out which fish were native to this region and which ones were—
Goddammit.
Gritting her teeth, she tried again.
“Relax,” she ordered herself.
Like it was really that easy. Shutting off her brain wasn’t as simple as freakin’ Patience O’Toole made it sound.

The impetus for the road trip is that Kayla (a professional photographer) is contracted to do a series of photos showing the aftermath of wildfire on forests that burned years ago. Smokejumper Tony accompanies her, since he has unique insights about these burn scars. The notion of rebirth in the wake of destruction is a metaphor I play with a lot in this book, and I’m fond of several scenes where they discuss or think about these fires while en route to visit another one of Tony’s exes….

Kayla watched out the window as the highway narrowed and the rush of mountain hemlock and Douglas fir began to thin. They were climbing, getting farther away from bigger towns.
And closer to northeast Washington, which was the site of the next burn scar. That’s what Tony called these old forest fire sites. Last night as they cuddled, he’d described the J & J Complex fire for her in detail. The acrid smell of smoke and trees bursting like bright orange torches. His heartbeat drummed in her ear as she’d laid her head on his chest and listened to the rumble of his voice. Heard him describe dense underbrush that burned so hot it reached high into tree canopies, wiping out great swaths of forest.
Only meadows remained in some spots, though Tony admitted he hadn’t been back for years. Maybe now, things could grow again. She’d read it could happen that way, the soil made fertile by heat and destruction.
Maybe that’s how it would be.

Naked, preferably in a bubble bath with a glass of wine and a sexy smokejumper.

I just turned in the third book in this series, which features Tony’s best friend, Leo, who is introduced in JUST A LITTLE BET. That book is called THE BEST KEPT SECRET and comes out next summer. It’s the story of a woman who rescues her sister’s ex from a loopy response to pain meds, then has to keep his biggest secret while trying not to fall for him.

Beyond that, I’m cranking on the last book in my popular Ponderosa Resort Romantic Comedy Series, which is DR. HOT STUFF (coming Dec. 11) along with the second book in my new Juniper Ridge rom-com series (releasing March 2021). It’s been a busy year!

Giveaway: Five readers can select their choice of any book in my Ponderosa Resort Romantic Comedy Series in digital format:
https://amzn.to/30SFzeS

To enter Giveaway: Please complete the Rafflecopter form and Post a comment to this Q: What’s your favorite road trip game?

Excerpt from Just a Little Bet:

After a night of too many drinks, smokejumper Tony Warren and his best friend, photographer Kayla Gladney, come to the realization that they’re both bad at love. They even tried dating each other, but that crashed and burned, too. Now he’s got the hangover from hell and the certain conclusion he’s just a shit boyfriend. But Kayla thinks he’s a straight-up commitment-phobe.

So they make a bet—they’re going to hunt down his exes and decide once and for all why he’s so unlucky in love. Terrible boyfriend or commitment-phobe. Why does either answer feel like he’s still losing?

But between roadside burgers and late night detours, they discover some fires never burn out—like the one slowly smoldering between them. And suddenly losing feels a whole lot like winning again.
Book Links: Amazon | B&N | iTunes | Goodreads |

When Tawna Fenske finished her English lit degree at 22, she celebrated by filling a giant trash bag full of romance novels and dragging it everywhere until she’d read them all. Now she’s a RITA Award finalist, USA Today bestselling author who writes humorous fiction, risqué romance, and heartwarming love stories with a quirky twist. Publishers Weekly has praised Tawna’s offbeat romances with multiple starred reviews and noted, “There’s something wonderfully relaxing about being immersed in a story filled with over-the-top characters in undeniably relatable situations. Heartache and humor go hand in hand.”
Tawna lives in Bend, Oregon, with her husband, stepkids, and a menagerie of ill-behaved pets. She loves hiking, snowshoeing, standup paddleboarding, and inventing excuses to sip wine on her back porch. She can peel a banana with her toes and loses an average of twenty pairs of eyeglasses per year. To find out more about Tawna and her books, visit www.tawnafenske.com.
Website | Facebook | Twitter | | Instagram |