Hi Joss and welcome to HJ! We’re so excited to chat with you about your new release, Lost and Found Heir! 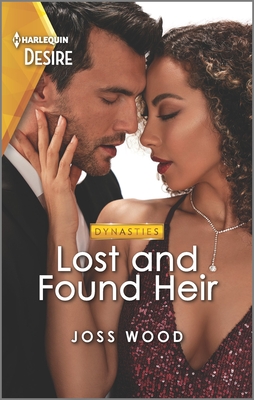 Garrett Kaye has always suspected that his mom’s boss was also his biological father and when he is asked to step into the role of Ryder International CEO, he learns that assumption wasn’t correct. And that he will also become an heir to a huge fortune.
Not sure if he wants to become tangled up with the famous family, and needing some space to think, Garrett agrees to accompany Jules Carson– a mixologist he met at the Ryder Ball– to a ranch in Colorado, to see if there is any chance of him helping her save the ranch that was her childhood refuge. He’s attracted to her but he doesn’t realise how much!

Garrett tried to imagine this glamorous woman on a ranch, mucking out stables and wrangling cows. Wrangling cows was what they did, wasn’t it? Having been brought up in an apartment, he was a city boy to the core and didn’t have the first clue. He couldn’t imagine this gorgeous woman in her stunning dress shoveling shit. He grinned.
“What’s so funny?” Jules demanded, green fire in her eyes again.
“I’m just trying to imagine you on a farm, doing farmy things.”
“Farmy things?”
He spread his hands. “Can you ride a horse? Do you know how to muck out a stall?”
Jules rolled her eyes. “And how to service a tractor, break in a horse and plow a field.” Her smile turned sinister. “I also know how to castrate a bull.”

Garrett is intrigued by the fact that Jules isn’t impressed by him– an unusual occurrence for the venture capitalist.

He seemed to annoy her, and the thought amused him.
Hers was an abnormal reaction and one that piqued his interest.
But Jules Carlson—a world-famous mixologist and bartender—was comprehensively unimpressed by him. Interesting.
He liked interesting.

As for Jules, she finds him arrogant and annoying and far too sexy. She likes beta guys, men who don’t rock her world!

I loved writing the banter between the two. They both give as good as they get!

“Are you asking me to dance?”
“Yes. I presume that a woman who can neuter a bull can also sway?”
Her hand slid into his, so much smaller and so much softer. She released a light snort. “Oh, I can do more than sway, Garrett Kaye. I’ve taken dance classes all my life.”
That didn’t surprise him. Every movement she made, whether it was to cock her head or lift her hands, was filled with grace. “Is there anything you can’t do, Ms. Carlson?”
“Not much,” Jules admitted as she stood up. “There are, however, many things I won’t do.”
He placed his hand on her lower back, keeping his touch light. Her perfume hit his nose, and Garrett was transported to the islands, to hot summer nights filled with stars and the scent of jasmine.
“What won’t you do, Jules?” Garrett asked her, as they hit the edge of the dance floor. He lifted her right hand in his and curled his left around her hip.
“I won’t cave-dive, eat guavas or sing in public.”
He smiled. “What else?” he asked, a little charmed. And more than a little scared to realize that he could actually be charmed.
“Eat snails, bungee jump or pierce my tongue. Oh, and I’m definitely never going to sleep with you.”

On the surface, it could be seen as another billionaire meets working girl book, but there’s a depth to it that’s unexpected. Jules’s backstory is pretty heartwrenching. As one reviewer put it…

“Parts of the story were hilarious, steamy and down to earth as two souls bare their innermost hearts to each other.”

I am currently working on edits for the third book in my Scadalss of the Le Roux Wedding for Harlequin Presents.

To enter Giveaway: Please complete the Rafflecopter form and Post a comment to this Q: Jules is a famous bartender. Do you have a favorite cocktail or drink, virgin or not? Share it with me.

Excerpt from Lost and Found Heir:

He’s inherited a family and a fortune. The last thing he wants is complicated.

Until he meets her…

Venture capitalist Garrett Kaye has received the offer of a lifetime—become the CEO of a billion-dollar company…but only if he acknowledges he’s heir to his recently discovered birth family. To keep his mind off his choices, he lets his attraction to smart, headstrong mixologist Jules Carson sweep him away. But will “no strings” turn into the ties that bind as he faces the impossible choice between his birthright and his future?
Book Links:  Amazon | B&N | iTunes | kobo | Google |

Joss Wood loves books and travelling— especially to the wild places of Southern Africa and, well, anywhere. She’s a wife, a mom to two young adults and slave to two cats and a badly behaved dog the size of a small cow.