Today it is my pleasure to Welcome author Stacey Agdern to HJ!

Hi Stacey and welcome to HJ! We’re so excited to chat with you about your new release, Love and Latkes! 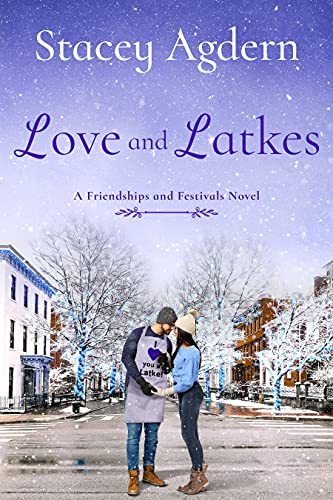 Web designer and aspiring kosher foodie Batya Averman returns to the hometown she fled years ago in order to design the website for the town’s inaugural latke fry off. But when she arrives, she discovers both the celebrity host has pulled out of the competition and her high school crush, Tax Accountant and part time purveyor of Kosher BBQ Abe Neumann, is one of the competitors.
When Batya resolves take on the hosting job, she learns that the most important things in life are Love… and Latkes.

“There was a bubbly soda feeling inside of Batya. It was fun to be able to feel it as opposed to spending all of her energy fighting it, suppressing it and making it burn her from the inside.” Batya, enjoying the feeling of just…being with Abe

I think it was so much fun watching Batya come into her own through the series, where she spent three books trying to figure out what her place was, and ended up in a position where she was strong enough to face the demons of her past, though not directly and not in a way she would have chosen, for sure. Abe was my dark horse, my big hearted tax accountant who like so many of us, have to split time between their job and their passion because of the financial requirements of both. One fuels the other. As usual, they told me their stories through music; a lot of classic Bon Jovi for Abe and some really cool mixes for Batya.

One of the big themes for this story is food as a love language, and Batya invites Abe back over to her house after a very challenging week. This where you see them start to believe they can be a couple, and there are bits that show up later. This is just a small snippet of the banter that flow out of them when they’re comfortable :

“I can’t take you anywhere,” she said, continuing to chop something.
He stepped closer and gawked. “You’re cutting potatoes by hand?!”
“Maybe I’m a traditionalist.”
He shook his head. “No. A masochist is what you are.”
She snorted. “Maybe I don’t have a food processor.”
“I could go get mine if you want.”
“Why don’t you help me chop?”
He considered the idea, and then took a knife, joining her as she chopped potatoes to the sound of a parody song’s joyful recitation of a recipe for latkes.
“We’re cutting onions here too?”
“I am,” she said, “but only one.”
He nodded. “Do you cry over onions?”
“Why? Would the fact that I cry over chopped vegetables be a problem?”
(can you see I had a hard time picking where to stop? )

When you’re writing a series, you always have to be aware of why you’re including characters who appeared in the previous books. And when you have pretty strong previous series characters, the characters in this book need to make it clear whose story it ACTUALLY is as opposed to letting others take over. It was so hard to get to this point in a scene that takes place towards the end of the story.

Finally, Abe threw up his hands and said ENOUGH.
If the two of them didn’t stop, Abe wasn’t just going to climb the walls, but also out of the window. “Okay, wait. Stop the show, not the car.”
And in the sudden silence, Abe wasn’t sure whether to be relieved or scared. But it didn’t matter. This wasn’t about Isaac and Jacob or whatever was going on between the two of them. “Now could one of you, and honest to god I don’t care which one, possibly tell me what the hell is going on?”

I think it’s absolutely an evolution. It’s published one year after my first book, Miracles and Menorahs, and I can absolutely see the growth in both the writing and the kind of topics I’m willing to write about and how I’m willing to analyze them through the course of the story. And the chances I take in this story never would have been possible had I not taken the chances I took in History of Us.

Jewish food in general isn’t exactly what you think it is, and Ashkenazi food deserves so much more respect than it gets.
-The importance of seeing childhood crushes as an adult and the amazing part of seeing someone in a way you never saw them before 🙂
-Hanukkah food and goodness *grins*

-A between the books feature for newsletter subscribers, featuring Anna, Jacob, Batya and what happens at comic con 🙂
-I’ve been working with a friend on figuring out how to rerelease the four stories I contributed to the four rogue anthologies and their companion story ‘the fifth question’. Look for more news on ‘the hope connection’ soon 🙂
– I have a few other things I’m working on, and having some fun with, so again, look for more information when I have it 🙂

Giveaway: An ebook copy of Love and Latkes & 3 Tule ebooks

To enter Giveaway: Please complete the Rafflecopter form and Post a comment to this Q: Which do you prefer: applesauce or sour cream and why 🙂 There are no right answers

Excerpt from Love and Latkes:

You can’t make a latke without breaking a few eggs…

Batya Averman is ecstatic when a latke fry-off committee chooses her as its web designer—until she learns the event is in Rivertown, New York, the hometown she fled years ago. But she’s no longer the girl with an embarrassing history and an unrequited crush on Abe Neumann. This delicious competition is Batya’s chance to further her career, and this time she won’t run.

Abe Neumann can’t pass up the opportunity to enter the town’s latke contest. He dreams of throwing caution to the wind and leaving his accounting firm, opening a Jewish deli, and choosing his own happiness. The prize money would bring him closer to making his dream a reality, but when Batya comes back to town, Abe remembers that a deli isn’t the only thing he’s wished for.

When the fry-off’s celebrity host has to pull out of the competition, Batya is determined to step up to the challenge. This Hanukkah, can Abe fix the past and convince Batya that dreams, like latkes, are better when they’re shared?

Stacey Agdern is an award-winning former bookseller who has reviewed romance novels in multiple formats and given talks about various aspects of the romance genre. She incorporates Jewish characters and traditions into her stories so that people who grew up like she did can see themselves take center stage on the page. She’s also a member of both LIRW and RWA NYC. She lives in New York, not far from her favorite hockey team’s practice facility.
Website | Facebook | Twitter | Instagram | GoodReads |

18 Responses to “Spotlight & Giveaway: Love and Latkes by Stacey Agdern”