Today it is my pleasure to Welcome author A.J. Locke to HJ!

Hi A.J. Locke and welcome to HJ! We’re so excited to chat with you about your new release, Magic Dark, Magic Divine! 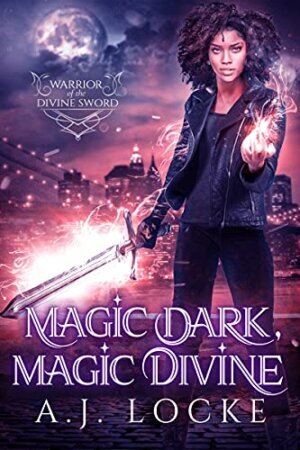 Waking up after 300 years to a magic-less world, mercenary Pennrae has had to conceal her magical skills. That is until magic-eating monsters descend on New York City causing all kinds of havoc.

I’ve taken many journeys across the ocean on a beast made entirely of water, in a seat assembled with driftwood and kelp, and those trips were way more comfortable than taking the subway during rush hour.

Though even on a good day I’d take an archaic mode of transportation over these tightly packed metal tubes. At least on the back of an Omnara, there was enough space to keep you from becoming too familiar with your fellow travelers.

Initially, Penn does not care much for Callan! He comes across as somewhat of a jerk, but once she spends time with him she’s able to realize he is more than her initial perception of him…which leads to a physical attraction she never saw coming, and eventually an emotional one. Callan is attracted to Penn’s strength and how easy it is to banter with her as he’s coming from a place of being closed off to others.

“God, woman, would you shut up.” Before I knew what was happening, he closed the small distance between us, slipped his hand behind my neck, and crushed his lips to mine.
Oh.
I stood rigid, but only for a moment before I relaxed, my arms going around him as he pulled my body against his.
His tongue slipped between my lips, and the sound he made in his throat as the kiss deepened made me wish we were anywhere but standing in a public place. There was something urgent and desperate about the way he kissed me, moving me backward until I was pressed against the side of the building, his hand slipping under my shirt, making my body shiver as the heat from his palms traced a path up and down my back. Our lips molded together like they were made for no other purpose.

One of my favorite scenes is very emotionally charged and just about the entire thing reveals too much, but I think I found a snippet that’s safe to share!

The skies had opened up and rain pounded down. Periodically, lightning flashed and thunder rolled across the sky, and I couldn’t help but feel as though only nature itself could express the emotions I was feeling.
There weren’t enough tears I could cry, enough screams I could release, enough words I could say that came close to how I felt about everything that had happened today.
But a raging thunderstorm was close enough.

It was like the death wail of every person or creature that had ever died. An eldritch sound belched up from the depths of the oldest grave. Terror like I had never felt before seized every nerve in my body as I saw a huge, clawed hand snaking out from the middle of the nexus points.
Like the Jigori, it looked like darkness made tangible—a roiling mass of putrid shadows. The scent made me want to cut off my own nose to avoid it. I retched, feeling an aura so dark, so full of death and destruction rise up, I could hardly fathom it.
The Majimorta was being released. We were almost out of time.

I am currently working on the second installment in the series!

To enter Giveaway: Please complete the Rafflecopter form and Post a comment to this Q: My book has five magic classes, called Talents. Which one would you like to be?

Conjurer – Can create magic constructs based on one of these elements: Fire, Wind, Water, Earth

Tamer – mastery over flora and fauna. Can tame wild, vicious creatures and have the greenest thumb ever.

Temporal – Their magic is all about time manipulation

Diviner – Celestial magic that allows them to perform prophetic card readings. They can also purify all the other types of magic.

Which Talent would you choose?

I always had my cards read before I killed someone.
Quite the irony that I used Divine magic to help me spill blood. Some called it an insult to the powers of the celestial unknown. I saw it as stacking the deck in my favor. And if Diviners had no problem guiding me, who cared what anyone else thought?
My Familiar, Ashe, made a restless noise as she followed me through the thick brush of a forest that felt as though it was closing in on us the farther we traveled.
A wisp of smoke trailed from her nostrils, and I gave her a sharp look. Since we were about the same height when she was in her Circoux form, she caught the look immediately, huffed, and turned her head away.
“No fire, you know that,” I said. “Yes, it would be nice if you could burn a path for us or if I could hack away at some of this brush, but you know we can’t. Not in these woods.”
She huffed again, but there was no more smoke. A Diviner’s land was sacred, and to bring harm to their spaces was to risk consequences no magic could help you avoid.
So my battle-ax remained slung on my back, and I endured tripping over the gnarled roots that tangled across the ground, and the vines that had a hint of sentient life to them—enough to snake around an ankle or tease a cheek.
For all her desire to make the trek easier on us, Ashe was lithe enough to navigate through with far more grace than me. I should have left my armor back at the inn we were staying at, but a warrior’s armor was like a second skin. I’d feel too exposed and vulnerable without it.
Finally, the trees cut off abruptly, as though a giant blade had drawn a decisive line.
I blew out a breath, partially in relief and partially because we would have to make the trek all over again when we left.
Mixuné’s tent was about a hundred feet away, glowing white as it was perfectly centered in a swath of moonlight. It was a simple, squarish tent held up by thick wooden pillars.
As Ashe and I neared, bobbing balls of light raced toward us, ruffling through my unruly hair and spiraling around my body. Ashe received her share of the curiosity and endured it with about as much patience as she had our journey through the woods. But she was wise enough to not release even the smallest puff of smoke.
“Hello, little ones,” I said to the Cephis. I opened my palm and a couple of them landed comfortably, with room to spare.
The tiny creatures stared up at me with their huge golden eyes while their delicate wings slowly fanned behind them. One of them was slightly taller than the other and had two tufts of hair stacked on top of each other. The other one had larger eyes. Cephis were like moonlight given form, and I only saw them close to Diviners.
The Cephis chittered in a language I didn’t understand but sounded beautiful nonetheless, and I felt soothed as I removed my weapons.
“You know the rules,” I said, glancing at Ashe, “No weapons allowed.”
I lay my weapons on the ground and Ashe lay down as well, left to the attentions of the Cephis that remained outside to continue their exploration of her, while the rest followed me in. As soon as I was through the tent flaps, I was enveloped in Divine magic.
Entering the tent always felt like crossing a liminal space.
Once I entered, I was Somewhere Else.

Pennrae Linbry’s done everything to make her life look as normal as possible. She’s a skilled karate instructor with a cute dog, great friends, and a sweet New York City loft. Her biggest nemesis is Callan, the gorgeous instructor at her dojo, because what’s not to loathe about a pompous jerk with perfect abs? But when a Brooklyn fair turns into a carnival of dangerous magic, “normal” disappears in a hot second.

Because Penn isn’t normal. Far from it. She’s a former warrior and Shaper from the magic-era who was punished with a 300-year-sleep. When she woke, magic was gone, along with her family and everything she knew. And now it looks like a dangerous Necromajin is in the present with her—and about to unleash a mess of magical hell upon the Big Apple.

Penn may have been asleep for a few centuries, but she’s still a fighter. With a powerful celestial alignment nearing and more questions than answers, she’s running out of time to save her city, her friends, and the love life she never saw coming from another magic apocalypse.
Book Links: Amazon | B&N | iTunes | Goodreads |

A.J. Locke is an author and artist, originally from Trinidad & Tobago, now residing in NYC with her daughter. She’s your typical over-caffeinated artist with too many ideas and not enough time to write them. She slays at urban fantasy but loves exploring other fantasy genres as well as poetry and children’s picture books. She’s a bookkeeper/child wrangler by day and moody writer by night.
Website | Facebook | Twitter | | Instagram |