Today, HJ is pleased to share with you Catherine Bybee’s new release: My Way To You

A woman’s journey through tragedy leads to the discovery of love in a novel about hope and survival by New York Times bestselling author Catherine Bybee. 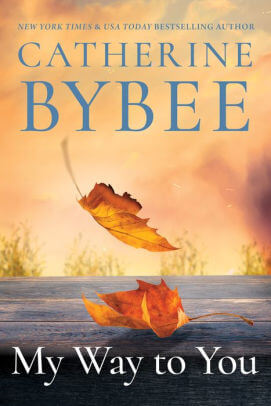 When a wildfire nearly destroys Parker Sinclair’s family home, it’s just one more disaster to add to her mountain of stress. For the past two years, she has shouldered the responsibility of raising her younger brother and sister after their parents’ untimely deaths.

Forced to leave college for a crappy job that barely pays the bills, Parker manages her family property, which consumes every aspect of her life. Now winter is coming and the forecast isn’t spreading sunshine on the dark cloud over her head. The last thing Parker needs is a mudslide destroying everything she has worked so hard to maintain.

Colin Hudson’s job as a public works supervisor is to protect Parker’s property and neighborhood from further damage. But it’s a little hard when the owner of the land is a control freak who tries to do everything herself. The hardworking, attractive young woman is far from the “hot mess” she claims to be. In fact, her tight grip of control is one of the things that attract him the most. It’s also the hardest to crack. Now Colin’s working overtime to help Parker open up her heart, trust him, and let him in.

As Parker and Colin work together to keep her home and neighborhood safe, they may be in for another disaster. Or they may just realize that sometimes it takes destruction to create something new.

Enjoy an exclusive excerpt from My Way To You

The morning air was still. The wind chimes didn’t bother to move.

Parker managed a few hours’ sleep and woke before the sun or Bennie, their rooster, had a chance to do the job.

Sliding into a pair of shorts and a tank top, Parker followed Scout out the door. The fire truck had left the property. Haze shadowed the blue sky as the sun started to rise.

Mallory joined her, a cup of coffee in her hands. “What do you think?” she asked.

“Hard to say. According to the weather report, the wind is supposed to shift.” She waved a hand in front of her face “Hence the crap in the air.”

“Dad would be telling us to relax.”

“And Mom would be freaking out.”

Mallory put an arm around Parker’s shoulders. “I wish they were here.”

Parker really didn’t want to stroll down that rabbit hole. She had enough to think about. Sweating in sorrow had no place in her day. She broke out of her sister’s arm and marched away.

“What are you doing?”

“Turning on the sprinklers. Rolling out the fire hose.” There was a hydrant in the middle of their yard. A five-thousand-gallon gravity tank fed it from up on the hill behind the house. It wouldn’t save it, but it might help. Until it was empty. Then there was the pool. But she hadn’t replaced the pump her father had set up to pull water from it in situations like this. Avoiding that bill had seemed like a good idea at the time.

I should have replaced the pump.

By ten o’clock, helicopters were buzzing over the neighborhood in regular succession. The firefighters parked in the yard and the air was full of hot ash.

The stillness of the morning shifted, and the wind started pushing the fire in their direction. Slowly, the blue sky disappeared behind smoke plumes that hovered overhead. The wind chimes kept a steady, pleasant beat to the movement of the air. Not like a Santa Ana, Parker thought. Where she would come out in the dead of night and take the chimes down because their frantic movement would keep her from sleeping.

All Parker and her brother and sister could do was watch the sky and the silhouette of the hillside. Standing beside one of the half a dozen firefighters, she started asking questions. “Will the air attacks put this out before it can get here?”

“They’re going to try, but those mountains aren’t easy to fly in with this much smoke.”

She grew up on those hills, understood firsthand just how steep they were.

What did that mean?

The thirty-something-year-old firefighter must have sensed her worry and smiled. “I’d pack your cars and be prepared to evacuate if this gets any closer.”

“Is there an evacuation order yet?”

“Voluntary. Many of your neighbors are moving their livestock, just in case.”

Parker hadn’t left the property all day and had no idea how many of her neighbors still hung around.

She ran a hand over her face, felt a fine layer of dirt on her palm after she did.

Not dirt, she corrected herself.

She motioned for Mallory to join her as she walked back up to the house. “Let’s load the cars … just in case.”

Parker looked into the same blue eyes that she saw every day in the mirror. A gift from their mother.

“They always put it out before it crests the hill,” she assured her sister.

“Yeah, but it’s always been on the other side of the canyon. Never from this side.”

Her sister was right, but she wasn’t about to feed into her panic. “You grab the photo albums, yearbooks … clothes and fill your car. I’ll get Mom and Dad’s stuff.”

Still, as Parker packed she told herself it was a wasted precaution.

Nothing was going to happen.

She loaded up her father’s gun collection in the trunk of her car along with all the ammo she could find. The last thing she wanted was to have bullets flying if the house did catch fire. She wasn’t sure if that was possible, but it seemed like the right thing to do. Her hands shook even as she told herself that she’d be unloading the car without leaving the property.

Parker looked around the space left in her car. “We don’t have room.”

“I don’t like this.” Tears blossomed in her sister’s eyes.

Parker started to choke up. “I don’t like it either, Mallory. Let’s keep it together, okay?”

The helicopters had stopped buzzing overhead. Not one water drop or plane filled with Phos-Chek graced them with any relief.

The smoke thickened and so did Parker’s nerves.

At one point she looked around all the first responders and didn’t see her brother. “Where’s Austin?”

Mallory pointed toward the neighbors. “At the De Lucas’ helping Lynn.” Lynn was the De Lucas’ adult daughter who was watching the house.

“Did he pack anything?”

Parker ran back to the house, went into her brother’s room, and took inventory. It didn’t appear that he’d packed a single thing. She grabbed his hamper, the clothes he obviously wore, and headed to his car.

Mallory ran into the house, the fear Parker felt rising shone in her sister’s eyes. “We see flames.”

Hair stood on end and the thud of Parker’s heart was loud enough to hear.

She dropped the basket on the floor and rushed out the door.

They both ran to the dry creek bed and stared at the path the fire was taking. A clustering of flames flickered up the hillside.

Parker marched up to the hotshot crew that had staged in the middle of the property. “Where is the other crew?” she asked, looking for the truck with hoses.

“One of our guys just left to get them.”

Her heart wouldn’t work long at this pace.

The sky went from hazy to gray. White ash started to fall.

She turned to her sister. “Go get Austin.”

Excerpt. ©Catherine Bybee. Posted by arrangement with the publisher. All rights reserved.

Giveaway: A digital copy of My Way To You by Catherine Bybee

New York Times, Wall Street Journal, and USA Today bestselling author Catherine Bybee has written thirty-four books that have collectively sold more than seven million copies and have been translated into more than eighteen languages. Raised in Washington State, Bybee moved to Southern California in the hope of becoming a movie star. After growing bored with waiting tables, she returned to school and became a registered nurse, spending most of her career in urban emergency rooms. She now writes full-time and has penned the Not Quite series, the Weekday Brides series, the Most Likely To series, and the First Wives series. For more information on the author, visit www.catherinebybee.com.

27 Responses to “Spotlight & Giveaway: My Way To You by Catherine Bybee”