Hi Annie and welcome to HJ! We’re so excited to chat with you about your new release, One Night With Her Forgotten Husband!

Hello! It’s lovely to be here again. Thanks for the invitation. 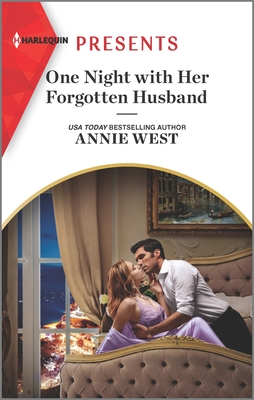 Angelo Ricci rescues a woman who’s washed up on his private beach. But she’s not just any woman. He recognises her instantly as the wife he’d divorced several years ago. He never wanted to see her again and isn’t ready to forgive her for her lies. Yet she has amnesia from a head injury and claims not to know him or who she is. Can he believe her? Why has she come back? And will he be able to keep his distance from the one woman who makes him crave things he shouldn’t want.

I do recall having such fun as I wrote the first chapter. Angelo finds his ex-wife, whom he hasn’t seen in years, washed up on his private beach. She’s unconscious. When she wakes this happens:
‘You know me?’
He rolled his eyes. ‘Spare me the playacting. Of course I do.’
She gripped the shirt closer with fingers that had turned clammy as she fought rising panic.
‘Then you can tell me who I am. Because I don’t remember anything.’

First up it was reader feedback that inspired me. Over the years I’ve written two amnesia stories. Both were amazing fun to write and both are very popular with readers. I was tossing around ideas and a heroine with memory loss came up as a possibility, mainly because of the many people who’d enjoyed ‘Forgotten Mistress, Secret Love-Child’ and ‘Her Forgotten Lover’s Heir’. Almost instantly I got a picture in my head of a rich, grumpy but wonderful hero at his private island retreat, confronted with the one woman who really hurt him. It was too good to resist!
I had an enormous fun creating the glorious garden at Angelo’s luxurious villa. It’s based on some Mediterranean gardens I’ve visited. It also owes a lot to my mother who was such a keen gardener and instilled in me a love of them.
Scent plays a huge part in this book. It’s a catalyst to Ally regaining her memory. That idea stems from an experience I had watching someone react incredibly strongly to a scent that took them straight back to a childhood memory that was full of emotion.
Ally, my heroine, has an interest in perfume making so late in the story she visits Grasse in the south of France, a place famous for growing flowers for the perfume industry and for making perfumes. I visited there myself and it was great reliving that as I wrote the story.

As always, it’s a mix of knowing the bare bones before I write but fleshing that out as the words go onto the pages. They were constantly surprising me, not with things that seemed out of character, but with the depth of their feelings. For instance, near the beginning everything Angelo tells Ally about her past and her character is negative. It’s one emotional blow after another and she has a hard time staying positive until she can regain her memory. Yet she stays strong, calling him on his bias and standing up for herself in ways that I admired and which surprised Angelo into thinking maybe there was more to her story than he knew.

The scene I really wasn’t looking forward to was the one when Ally remembers the past. There are things there that her mind was blocking out and, though I do enjoy putting my characters in tough situations, I felt sorry for her and didn’t want her to have to relive those things. But we got through it and I’m happy to say she was stronger for it. Interestingly I found that the bad experiences she recalled also came with lots of good ones and that there was joy through the tears.

No, we’re definitely in real Annie West territory with this one! It’s full of drama, in fact you might even say having a long lost spouse wash up on your beach might be a tad melodramatic! There’s lots and lots of emotion and a real tug of war between Ally and Angelo – that push/pull of two people incredibly drawn to each other but fighting it for the best of reasons. I like to think drama, emotional depth and sizzle are my trademarks. I’d love to know what others think.

That lovely warm glow of satisfaction when two people you care for find happiness together. A sense of issues wrapped up and above all optimism that even in difficult times, there’s a good way forward.

I’m just beginning a book so new I don’t even have the character’s names! I’m still sorting out in my head exactly what it’s about. I love this stage, when there are so many possibilities and I’m eager to play with them. My next book to be published is THE DESERT KING MEETS HIS MATCH which I simply adored. It’s about a new king who hires a matchmaker because he needs to find the perfect spouse, fast. Trouble is, his matchmaker keeps distracting him and suddenly his plans for a sensible, dynastic match are thrown into disarray. I love it when my hero’s plans unravel! If you’re interested, it’s available for preorder.

Giveaway: I’ll give two readers each a signed paperback romance of mine, no matter where in the world they live! It could even be another story about lost memories.

To enter Giveaway: Please complete the Rafflecopter form and Post a comment to this Q: If you read the story you’ll see that Ally loves being outside. She has an affinity with growing things and is an enthusiastic gardener. If you could grow anything you like, either indoors or in a garden, what would you choose and why?

Excerpt from One Night With Her Forgotten Husband:

She can’t remember their marriage…
But she can’t resist him!

Washed up on the pale pink sand of a luxury Italian private beach, Ally can’t remember anything except her name. The man who saved her is a mystery, although Angelo Ricci insists she’s his ex-wife!

Stranded on Angelo’s island, Ally soon discovers her attraction to him is undeniable. It’s clear their divorce wasn’t amicable, yet Angelo looks at her with a heat that feels all-consuming. And Ally is tempted to spend one night in her forgotten husband’s arms. A night that reveals more about their marriage than either of them expects…

USA Today Bestselling author Annie West loves writing passionate, intense love stories. She has devoted her life to an in depth study of tall, dark, charismatic heroes who cause the best kind of trouble in the lives of their heroines. Creating heroines who are a perfect match for those strong, stubborn men is one of her all time favorite things. As a sideline she’s also researched dreamy locations for romance, from vibrant cities to desert encampments and fairytale castles. She lives on the east coast of Australia and her favorite things are books, good company, good food and travel. For behind the scenes news, early release information and free giveaways, sign up for Annie’s newsletter: https://tinyurl.com/ya56pe7c
Website | Facebook | Twitter | Instagram | GoodReads |

23 Responses to “Spotlight & Giveaway: One Night With Her Forgotten Husband by Annie West”