From New York Times bestselling author Christina Dodd comes a brand new, standalone suspense about a reclusive artist who retrieves a seemingly dead woman from the Pacific Ocean…only to have her come back to life with no memory of what happened to her. 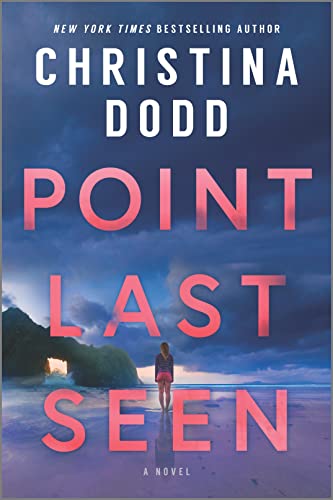 With a strong female protagonist, a chilling villain, and twisty secrets that will keep you turning the pages, POINT LAST SEEN is perfect for the thriller/suspense category and for fans of Lisa Jewell, Jayne Ann Krentz and Sandra Brown.

Elle remembers her favorite color, what she likes to eat, what size shoes she wears…so why doesn’t she remember her full name or how she got those bruises on her throat? And why, when Adam Ramsdell pulled her half-frozen body from the surf on a lonely California beach, did she scream as if she was being murdered?

Elle finds refuge in Adam’s home on the edge of Gothic, a village located between the steep lonely mountains and the raging Pacific Ocean. There, as pieces of Elle’s memory return, she faces a grim truth—she knows a secret so dark it could get her killed.

With her life—and Adam’s— at stake, Elle must step from the shadows and seek the assassin who stalks her nightmares…

A Morning in February

Excerpt. ©Christina Dodd. Posted by arrangement with the publisher. All rights reserved.

Giveaway: One copy of POINT LAST SEEN by Christina Dodd (US and Canada only)

New York Times bestselling author Christina Dodd writes “edge-of-the-seat suspense” (Iris Johansen) with “brilliantly etched characters, polished writing, and unexpected flashes of sharp humor that are pure Dodd” (Booklist). Her fifty-eight books have been called “scary, sexy, and smartly written” by Booklist and, much to her mother’s delight, Dodd was once a clue in the Los Angeles Times crossword puzzle. Enter Christina’s worlds and join her mailing list for humor, book sales and entertainment (yes, she’s the proud author with the infamous three-armed cover) at www.christinadodd.com.