In Out of the Clear Blue Sky by Kristan Higgins, They say it’s always the wife who’s last to know when a 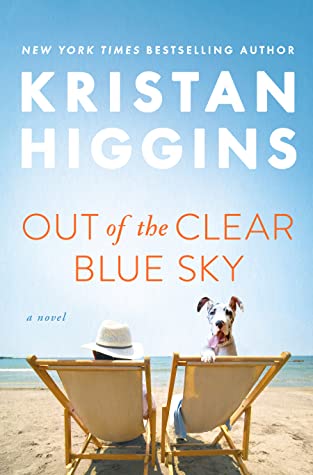 husband has been cheating, and in Lillie Silva’s case, that adage is all too true. Married for twenty years to Brad, with a son just about to graduate high school and leave for college, she thought getting used to there only being two of them to share their cozy house in Cape Cod would be the big adjustment. Not divorce. And certainly not because Brad cheated on Lillie with someone sixteen years his junior. With so many changes going on all at once, is it any wonder that she gives in to her petty side and pulls a few pranks to show the precious new couple just what she thinks of them?

‘I loved our life. Could he just…just end it? With no input from me whatsoever? Was that even legal? Two people had to consent to marriage. Shouldn’t two people also have to consent to divorce?’

Even Lillie’s job as a nurse-midwife doesn’t fill her days (or nights) enough to keep her from stewing over how she’s been wronged. But as time wears on and she learns more about the “other woman”, Melissa, meets spunky twelve-year-old Ophelia, Melissa’s niece, and dives into her own past, Lillie realizes she has a choice. She can take what happened to her and grow from it, find her way to a happier place in her life. Or she can wallow in her anger. While she might take just a smidge more time to get over things, Lillie knows that with the help and love of her family and friends, she will eventually come out of this ordeal better than ever.

“Hey. You’re the one who put the skunk in our house, aren’t you?”
“Skunk? What skunk?”
She smiled. “You are, aren’t you? You hate them. My aunt and that boomer she married.”
Boomer. I loved this child.
“‘Hate’ is such a strong word. But yeah, he cheated on me and dumped me, so I’m a little…bitter.”

Only Kristan Higgins could make me giggle, cringe, growl in frustration, and shed both happy *and* sad tears all in one book. Out of the Clear Blue Sky showed the resilience of two very different women as they both reinvented themselves at different times in their lives.

‘Sometimes, your life shatters when you least expect it… People you loved could disappoint you, and other people came through when you never expected it… And sometimes, happiness just rains down on you out of the clear blue sky.’

Yet again Kristan Higgins went all in with a serious topic–in this case, infidelity–and shared it through two distinctive POVs: the scorned woman, Lillie, and the mistress, Melissa. The majority of the story was Lillie’s narrative leading up to and then after her husband of twenty years, Brad, left her for Melissa. I have to admit that it was a little weird to get the POV of the woman who broke up the marriage. She was a piece of work. But it did help to get insight into why Melissa preyed on Brad, where she started in life, how she made herself into someone completely different to get what she wanted, etc. It didn’t really make me like her more. Although, thankfully, I did think by the end of the book even Melissa did a wee bit of growing up.

Lillie was pretty much what I think of when it comes to a woman who grew up on beautiful but unforgiving Cape Cod, the daughter of a hardworking scallop fisherman. She was resourceful, a loving mother and wife, and a kind friend. Lillie was also a wicked good nurse-midwife. Something that alongside her woes as a new empty nester was talked about in detail. Some of the birth scenes were honestly a little much for this non-mom. (lol) And it might be tough for those who have fertility issues or difficult pregnancies to hear Lillie talk about being an earth mother and how pregnancy, as well as giving birth without medicine, is how nature intended it.

What I think readers *will* enjoy in regard to Lillie is how she kind of loses her mind for a short time coming up with ways to get back at Brad (and Melissa). Higgins basically had her doing the things that I can only imagine most women who’ve been cheated on or “traded in for a younger woman” thinks of. Lillie had almost the entire town of Wellfleet on her side. So any antics she did get up to were quickly swept under the rug–but not before some huge laughs were had about it by her family and friends. It wasn’t all chuckles, though, of course. And I thought Higgins did a nice job wrapping up each scene with genuine emotions, running the gamut from gut wrenching grief to outright anger to utter disbelief–and eventually to acceptance.

QOTD: Have you ever pulled any pranks to get revenge on someone who wronged you?

From New York Times bestselling author Kristan Higgins comes a funny and surprising new novel about second chances–and why the lies we tell ourselves are the most dangerous.

Lillie Silva knew life as an empty nester would be hard after her only child left for college, but when her husband abruptly dumps her for another woman just as her son leaves, her world comes crashing down. Besides the fact that this announcement is a complete surprise (to say the least), what shocks Lillie most is that she isn’t…heartbroken. She’s furious.

Lillie has loved her life on Cape Cod, but as a mother, wife and nurse-midwife, she’s used to caring for other people…not taking care of herself. Now, alone for the first time in her life, she finds herself going a little rogue. Is it over the top to crash her ex-husband’s wedding, dressed like the angel of death? Sure! Should she release a skunk into his perfect new home? Probably not! But it beats staying home and moping.

She finds an unexpected ally in her glamorous sister, with whom she’s had a tense relationship all these years. And an unexpected babysitter in of all people Ben Hallowell, the driver in a car accident that nearly killed Lillie 20 years ago. And then there’s Ophelia, her ex-husband’s oddly lost niece, who could really use a friend.

It’s the end of Lillie’s life as she knew it. But sometimes the perfect next chapter surprises you…out of the clear blue sky.

4 Responses to “REVIEW: Out of the Clear Blue Sky by Kristan Higgins”