Today, HJ is pleased to share with you Liz Talley’s new release: Room to Breathe

A funny, emotional novel full of southern charm about a mother and daughter ready to start over. 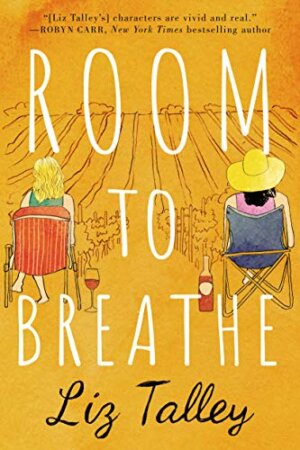 For a good part of Daphne Witt’s life, she was a supportive wife and dutiful mother. Now that she’s divorced and her daughter, Ellery, is all grown up, Daphne’s celebrating the best part of her life, a successful career, and a flirtation with an attentive hunk fifteen years her junior…who happens to be her daughter’s ex-boyfriend.

Ellery is starting over, too. She’s fresh out of college. Her job prospects are dim. And to support her fiancé in med school, she’s returned home as her mother’s new assistant. Ellery never expected her own life plan to take such a detour. With no outlet for her frustration, she lets an online flirtation go a little too far, especially considering her pen pal thinks he’s corresponding with her mother.

As love lives tangle, secrets spill, and indiscretions are betrayed, mother and daughter will have a lot to learn—not only about the mistakes they’ve made but also about the men in their lives and the women they are each hoping to become.

Enjoy an exclusive excerpt from Room to Breathe

Daphne Witt had always done everything by the book. She took dry-clean-only clothing to the dry cleaner. She always washed the dishes before she went to bed. Her limit on wine was two glasses. No more. She even rinsed out her peanut butter jar for recycling . . . and that was a huge pain in the rump.

So the very idea that she was standing in her recently gutted bathroom lusting after the twenty-five-year-old man measuring the space for the soaker tub she’d bought on clearance was mind-boggling.

But she couldn’t seem to stop imagining how his defined abs would feel beneath her fingertips or the way the sweat sheening his neck might taste on her tongue.

It was raunchy, disturbing, and honestly, a bit of a relief.

Because when her then-husband, Rex, had pulled out of their driveway two years ago, loaded down with his worldly possessions, that part of herself—the one that got all gooey when Rex wrapped his arms around her and kissed her nape while she scrubbed the lasagna pan—had withered up dry as bird droppings on hot pavement. And her desire, libido, or whatever drove a woman to wear a lace thong that disappeared into kingdom come hadn’t shown back up until, well, now.

And danged if it hadn’t shown up like a Cat 5 hurricane.

“I think the tub you bought will fit fine,” Clay said, the metal tape measure snapping into place, sounding louder than normal in the hollowed new addition that was open to the October heat. He turned toward her with a congratulatory smile. “Nice find on that tub, by the way.”

Clay Caldwell was almost young enough to be her son. In fact, he’d taken her daughter, Ellery, out a few times in high school. So Daphne shouldn’t be admiring the way he filled out his Dickies work pants. Checking out a guy who was about fifteen years her junior was wrong.

Still, it wasn’t like she was doing anything more than admiring a handsome, very fit man. No harm in that, right? After all, Clay seemed to be asking for it, parading around without a shirt, rubbing his hand over those washboard abs, and cracking smiles like a frat boy popping beers.

Wait? Was this sexism?

He was asking for it.

“Sorry. Why don’t you call me Daphne?” she said, pulling her attention from her ridiculous thoughts back to the very real present. Clay was her contractor. Period.

He shrugged his sun-kissed shoulders. Shoulders that invited touching. Damn it. Focus. “Sure, but it feels weird calling you Daphne.”

“I’m not collecting social security . . . yet,” Daphne joked, trying not to be offended. Of course he didn’t want to call her Daphne. He’d always known her as Mrs. Witt, and as a good ol’ southern boy, he’d call her Mrs. Witt until she turned up her toes, no doubt.

What did a woman say to being told she was someone that younger guys wanted to . . . uh, do? “I don’t even know what to say to that, Clay. Uh, thank you?”

Clay laughed. “Sorry. I mean, it’s true. You were always the prettiest mom, but, yeah, inappropriate to mention. I’m trying hard as hell to be professional here. But, hey, I don’t want you thinking you’re out to pasture or anything. You’re still pretty . . . um, pretty.”

Was Clay flirting with her? No. He was just being sweet. Tossing her a bone. Besides, even if he were flirting, Daphne wouldn’t know. She’d gotten married at the end of her junior year of high school and never learned “single gal at the bar” skills. She wouldn’t recognize an innuendo if it slapped her in the face. Daphne had married the boy who sat next to her in kindergarten and ate paste. From day one Rex had been as obvious as mud on white pants.

Excerpt. ©Liz Talley. Posted by arrangement with the publisher. All rights reserved.

Giveaway: eBook copy of Room To Breathe by Liz Talley

A finalist for both the Romance Writers of America’s prestigious Golden Heart and RITA Awards, Liz Talley has found a home writing heartwarming contemporary romance. Her stories are set in the South, where the tea is sweet, the summers are hot, and the porches are welcoming. She lives in North Louisiana with her childhood sweetheart, two handsome children, three dogs, and a naughty kitty. Readers can visit Liz at www.liztalleybooks.com.

15 Responses to “Spotlight & Giveaway: Room to Breathe by Liz Talley”