Today it is my pleasure to Welcome author Michele Hauf to HJ!

Hi Michele and welcome to HJ! We’re so excited to chat with you about your new release, Witness In The Woods! 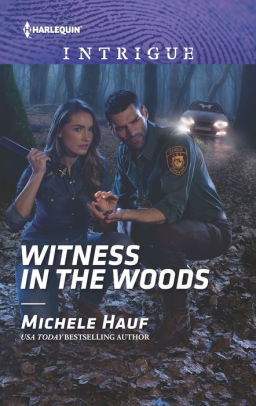 A small-town vet learns family secrets that could jeopardize her future—even her life. The man who can help her is the one who got away…

Just because there were some real fun elements in this pretty serious story I’m going to tease you with this one:
A squawk from behind Joe turned him sharply on the creaky lower wood step. Skylar noticed his hand instinctively went to his hip where his gun was holstered. A chicken in a pink knit sweater scampered across the crushed quartz pebbles that paved the stone walk up to the front steps.
“What the hell?” Joe said.

They actually got together previously before the story starts, at a wedding. But then, their schedules never worked out and one was always dating another so they weren’t able to actually start a romance. So this story starts when there is the ‘slightest’ chance there might be an opening to start that.

Actually, the opening scene, where the heroine stands over a bonfire fire with her wedding dress in hand kind of tugged at me. I could imagine the heartbreak, even though I’ve never experienced the kind she has, I could relate, in a different manner, to her emotions.

For some daring suspense set in the Boundary Waters of Minnesota and featuring a sexy hero who wants to do the right thing, but is pulled the opposite direction when he wants to save the heroine.

I am currently setting up my release calendar for 2020. It will feature re-releases of my past-published books. I will have a book, or two (or three!) out every month next year. So it will be a great time for readers to catch up on past stories they may have missed in my world of Beautiful Creatures, and a few stories not set in that world.
Also, I have my fingers crossed that a few proposals I have on editor’s desks right now will get sold!

Giveaway: I have 3 copies of WITNESS IN THE WOODS to give away (1 each to 3 winners). Entrants in US only, pretty please. And I will include a bonus book to each winner, which will be a surprise.

Excerpt from Witness In The Woods:

To keep her safe.

When shots are fired, wildlife officer Joe Cash responds to the call and finds himself face-to-face with Skylar Davis and her pet…wolf. It’s Joe’s job to protect all endangered species—including the pretty vet’s menagerie of rescues. As the threats intensify, Joe realizes Skylar could be the key to busting a ruthless poaching ring. But she’s keeping a secret that could cause more harm than either of them can imagine.
Book Links:  Amazon | B&N |  kobo |

Award-winning author Michele Hauf has published over 90 novels in historical, paranormal, and contemporary romance, fantasy, as well as writing action/adventure as Alex Archer and erotica as Michele Renae. The launch author for numerous series at Harlequin, she likes writing in a variety of genres and instead of ‘writing what she knows’ prefers to write ‘what she would love to know and do’ (and yes, that includes being a jewel thief and/or a brain surgeon).

34 Responses to “Spotlight & Giveaway: Witness In The Woods by Michele Hauf”