Today it is my pleasure to Welcome author Michelle Dayton to HJ!

Hi Michelle and welcome to HJ! We’re so excited to chat with you about your new release, Scammer Girl! 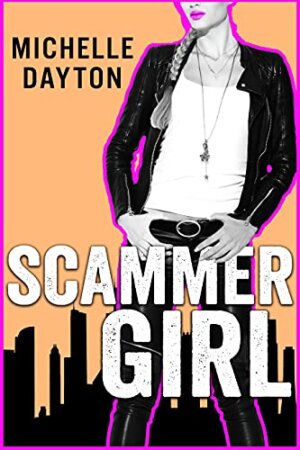 Scammer Girl is about Jo Harper, the leader of a team of young women con artists. They run romance scams on married cheating men. But then they make a mistake and target the brother of Jamie, a famous tech guy who gives Ted Talks on how to make the Internet a safer place for everyone. Obviously, Jo and Jamie should loathe one another … and obviously, they DO NOT. 🙂

I think the opening line sets the tone:

“It is a truth universally acknowledged that to trick a rich man out of a large sum of money, one must be very clever and very patient.”

I absolutely love movies like The Thomas Crowne Affair and Ocean’s 8. Con artists and great clothes and fancy locales. For me, it’s the most fun form of escapism. I wanted to write a book in that style.

Jo was actually really hard to write. She’s kind of a puppet master. She’s a brilliant psychologist and always two steps ahead of everyone. And she’s more self-aware than some of the other characters I’ve written; she knows what her emotional limitations are and why she has them … So it was challenging to write her growth arc, to figure out what the dynamite was to get this particular woman to complete her emotional journey.

She and Jamie meet in person and then they get to know each other in writing before meeting again. I think it was in writing those letters that I finally got a true sense of her character.

There is a cat & mouse aspect to the beginning of Jo and Jamie’s relationship. He’s fascinated by her, but considers her a criminal. She knows that he’s a powerful man who could probably have her arrested. So, despite their immediate attraction and mutual respect for one other’s brains, they warily circle each other for a bit. He tracks her down in New Orleans and stuns her by appearing in a fancy lounge where she’s having a drink by herself.

“He met me in the middle of the dance floor, and I stepped into the circle of his raised arms. I put my left hand on his shoulder and placed my right in his left. His right hand took possession of my left hip, and we began to move tentatively around the parquet floor. We were somewhat clumsy, and he almost trampled my heeled sandal with his second step. Why that caused my heart to flip over, I had no idea. I tried to concentrate on the smoky voice of the singer instead of the warmth of his hands or the way he stared down at me.
We were well into the second verse before he spoke. “You’re stunning.”
Gulp. “You’re sneaky,” I retorted.

This is pretty funny for an author of romance novels, but I always struggle with writing the lead-up to the all-important first kiss, and this book was no different:

After another pause, he grinned. It wasn’t one of his adorable, sweet smiles. This one had a wicked twist. “Since we’re being honest, tell me. What was the best kiss of your life?”
My my, it was getting warm in here. I pretended to think. “Hmm. One of my college boyfriends kissed me on the 50-yard line of the football field. That was memorable. Or, I once had a boyfriend with a thing for elevators. On every elevator ride I ever took with him, he’d plant one on me the minute the doors slid closed.”
He shook his head and spoke in a stern voice. “I’m sorry. Those answers are not acceptable. I did not ask about locations of kisses. I was speaking of kiss quality.”
He lowered his voice to a whisper again. “The kind of kiss you think about at night, when you’re lying in bed alone and wishing you weren’t.” He placed his free hand on my thigh and leaned closer. “Which kiss do you think about then?”
There was only one right answer to that question, and oh, I knew it. Leaning forward, so that his hand slid even higher on my leg and our mouths were only inches apart, I licked my lips. My pulse quickened in delight at this marvelous anticipation. “This one?”
He nodded slowly, and I guessed that he was savoring the thickening air between us as much as I was. “This one.”

This is pretty typical of my writing style: lots of snappy dialogue and banter. I did get to write part of Jo and Jamie’s love story in letters though, and I’ve ALWAYS wanted to do that.

You know what? 2020 and 2021 were such tough years. 2022 doesn’t look like it’s going to be much easier. If I hadn’t been able to escape into fun books for hours at a time, I would have gone insane. So I hope this book is just a fun afternoon escape for readers.

I’m working on finishing out the Tech-nically Love series. The next book (which features characters from both DISASTER GIRL and SCAMMER GIRL) comes out in June. And there will be a Christmas story in the series next winter as well.

To enter Giveaway: Please complete the Rafflecopter form and Post a comment to this Q: As I mentioned, I love The Thomas Crowne Affair and Ocean’s 8. Can you recommend other movies or books like these to me? It’s a long cold winter …

Technology complicates everything, including love.

Five years ago, Jo Harper did a bad thing. Dumped, injured, and in crippling debt, Jo did what any desperate woman with a PhD in psychology and above-average computer skills would: become an elite, undetectable online romance scammer. Now Jo and her team of four young women bring in enough cash to keep them securely afloat. Their targets? Married cheaters.

Jamie March, Bay Area royalty known as “The Conscience of Silicon Valley,” hates every aspect of online crime, especially those who defraud people. And when it appears that his brother is the victim of a sophisticated romance scam, he can’t stand idly by.

What’s weird though, is that when Jo and Jamie meet…they don’t hate one another. Not at all. He makes her laugh and feel alive again. She challenges his intellect like no other. But they can’t trust one another, right? And you can’t fall in love with someone you don’t trust—or can you?

There are only three things Michelle Dayton loves more than sexy and suspenseful novels: her family, the city of Chicago, and Mr. Darcy. Michelle dreams of a year of world travel — as long as the trip would include weeks and weeks of beach time. As a bourbon lover and unabashed wine snob, Michelle thinks heaven is discussing a good book over an adult beverage.
Website | Facebook | Twitter | Instagram | GoodReads |