Hi Carolyn and welcome to HJ! We’re so excited to chat with you about your new release, Slow Dance Holiday!

It’s a pleasure to be back to visit with all y’all about my newest novella, A Slow Dance Holiday! 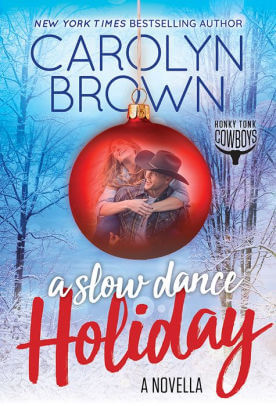 Jorja Jenks was elated to find out that she had inherited half ownership of The Honky Tonk in the tiny town of Mingus, Texas. Of course she’d have to share an efficiency apartment with the co-owner, Cameron, a woman she’d never met, but that wasn’t any big deal. She’d had roommates before and besides her best friend was named Cameron.
Cameron Walsh was as happy as a cowboy could be when he learned of his inheritance. His friend JJ had grown up together, so he pictured his new partner as a fun loving guy like his favorite cousin had been.
Imagine their surprise when they were both wrong, and suddenly they were having to share a tiny apartment at the back of the bar and work together in one of the worst snowstorms that part of Texas had ever seen.

*Jorja Jenks had never been one to take risks. She wasn’t the type of woman to quit her fantastic job in Nashville, Tennessee, on a whim to move to Mingus, Texas (population two hundred), but she did.
*Cameron Walsh was a big risk taker. He didn’t care what other people thought about his decisions.
*He (Cameron) groaned when he realized he was looking at a shower curtain that had a Christmas tree printed on it. He turned around bewildered. Cowboys didn’t decorate and they damn sure didn’t use doilies under cute little lamps, like the one sitting on the chest-of-drawers on JJ’s side of the room.
*He raised both hands and said, “I didn’t know JJ was bringing a girlfriend, but that explains all the foo-foo crap.”
“Are you drunk or crazy?” the woman asked, “No one calls me JJ except my grandparents, and I damn sure don’t have a girlfriend.”
“You are JJ?” Cameron felt as if his eyeballs were going to flip out of their sockets and roll around on the floor like marbles at the toes of his cowboy boots.
“I am Jorja Jenks.” She said, and her grip on that gun was firm and her hand was steady.
*“I’m Cameron Walsh,” he said. “You can put the gun away. Looks like we’re going to be roommates and co-owners of the Honky Tonk.”
“That’s not possible. Cameron is a girl.” She stammered.
“And JJ was my favorite cousin, and believe me, he was all cowboy,” Cameron chuckled.

Cameron is attracted to Jorja because she is so good at what she sets out to do, from taking care of the books to decorating the bar for Christmas, even to talking to the customers.
Jorja is attracted to Cameron because having worked in a bar for years, he knows the business so well.
They are both attracted to each other because every time they are in close proximity, sparks fly!

Cameron is all male so it came as a surprise to me when I found out he was afraid of spiders:

The door to the utility room opened and Jorja dragged out a box with a picture of a Christmas tree on the front of it. His eyes left the box and focused on the fuzzy black spider crawling toward her arm. He started to yell, but words wouldn’t come out of his mouth. The critter hopped from the box to her arm and she simply slapped it away.
Cameron could tolerate snakes, wild bulls, mice, rats and even red headed women, but spiders gave him hives. When the black, furry thing flew through the air and landed on his leg, he came up out of the bed with a yelp and began dancing around the room.
“Good God! What’s the matter with you?” Jorja stomped the spider, gasped and spun around.
He felt a cold breeze on his naked body and scrambled for his sleeping shorts that were lying on the floor. “Sorry about that. I must’ve kicked these off in the night,” he muttered as he pulled them on.
“Rule number one,” she said, “you have to wear clothes to bed.”
“You can turn around now,” he said.
“Are you sure?” she asked.
“Do I have to wear a shirt, too?” He glanced at the black spider she had smashed and shivered.
“That would be nice.” Her face was still scarlet when she turned around. “So, you’re afraid of spiders? Anything else going to make you do your rain dance?”
“Nothing like a spider touching me.” He jerked a shirt down over his head. “Where did that sorry little bastard come from? What are you scared of?”
“Probably out of the storeroom where the Christmas tree was put after last holiday season. There’s probably another one hiding up under your sheets, and to answer your question, I’m afraid of commitment,” she answered.
“Too bad I can’t wipe away a dead commitment to repay you.” His eyes shifted over toward his unmade bed. He wouldn’t be able to crawl between the sheets until he was sure all spiders were gone. The only good spider, in his estimation, was a dead one, and there was no wrong way to kill one of the evil varmints.

Because it will entertain them, make them believe in the miracle of Christmas and love.

I’m working on a woman’s fiction book, The Hope Chest, that will be out in 2021. Upcoming releases include:
Sept. 8: Honky Tonk Christmas, a reissue that will have A Slow Dance Holiday included as a bonus story.
Sept. 29: A Country Christmas, an anthology that I share with Rochelle Alers, A.J. Pine and Hope Ramsey. My novella, The Perfect Christmas will wrap up the Longhorn Canyon Ranch series.
October 13: Christmas at Home, a reissue of Mistletoe Cowboy
Nov. 1: The Wedding Gift, an audible novella
Dec. 8: The Daydream Cabin, a women’s fiction novel

Giveaway: I will give away a signed copy of Honky Tonk Christmas that has A Slow Dance Holiday included as a bonus story.

To enter Giveaway: Please complete the Rafflecopter form and Post a comment to this Q: Do you read Christmas books all year or do you save them for the season?

Opposites attract just in time for the holidays in this brand new novella from beloved, bestselling author Carolyn Brown.

From New York Times and USA Today bestselling author Carolyn Brown comes a brand new, sexy holiday romance. Legend has it the Honky Tonk bar in tiny Mingus, Texas, is charmed and its owners will find true love. But when new owners Cameron Walsh and JJ Jenks meet the week before Christmas and discover the deal includes sharing an efficiency in the back of the bar, they’re not sure it’s going to be the down-home Christmas they dreamed of…
Book Links:  Amazon | B&N | iTunes | kobo | Google |

Carolyn Brown is a New York Times, USA Today, Wall Street Journal, Publishers Weekly, and #1 Amazon and Washington Post bestselling author and a RITA finalist. She is the author of more than one hundred novels and several novellas. She’s a recipient of the Bookseller’s Best Award, the prestigious Montlake Diamond Award, and also a three-time recipient of the National Reader’s Choice Award. Brown has been published for more than twenty years, and her books have been translated in nineteen foreign languages.
She’s been married for more than fifty years to the love of her life, Charles Brown, a retired high school English teacher that she refers to as Mr. B. They have three children and enough grandchildren and great grands to keep them young. When she’s not writing, she likes to plot new stories in her backyard with her tomcat, Boots Randolph Terminator Outlaw, who protects the yard from all kinds of wicked varmints like crickets, locusts, and spiders. Visit her at www.carolynbrownbooks.com.
Website | Facebook | Twitter | Instagram | GoodReads |